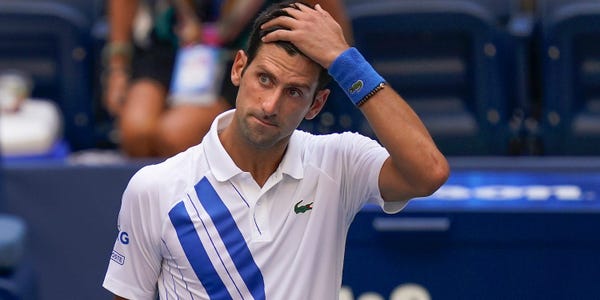 No. 1 men's tennis play Novak Djokovic is out of the U.S. Open after hitting a line judge with a ball.

Djokovic fell behind 6-5 in the first set to his opponent, Pablo Carreno Busta, when he hit a ball back toward the line judge. The ball struck the judge in the back and face area and she fell down. Djokovic immediately ran back to check on her.

The match officials debated the punishment as Djokovic pleaded his case, saying the woman didn't appear to be seriously hurt. According to tennis reporter Ben Rothenberg, Djokovic asked for other penalties.

Moments later, Djokovic shook hands with Carreno Busta and the match was over.

Djokovic was undefeated in 2020. The decision ended his bid for an 18th Grand Slam prematurely.

It has been a controversial season for Djokovic, despite his success on the court. Djokovic came under fire earlier in the year for saying he is "opposed" to vaccines and wouldn't want to get one for COVID-19. Djokovic was also criticized for posting an Instagram Live in which he made questionable health claims, like that tainted water could be purified with positive thoughts.

In June, Djokovic was one of several men's tennis players to test positive for COVID-19 after he held his own exhibition tour while ATP events were postponed for the coronavirus pandemic.

After falling out of the tournament, Djokovic immediately left the grounds and did not speak to media.