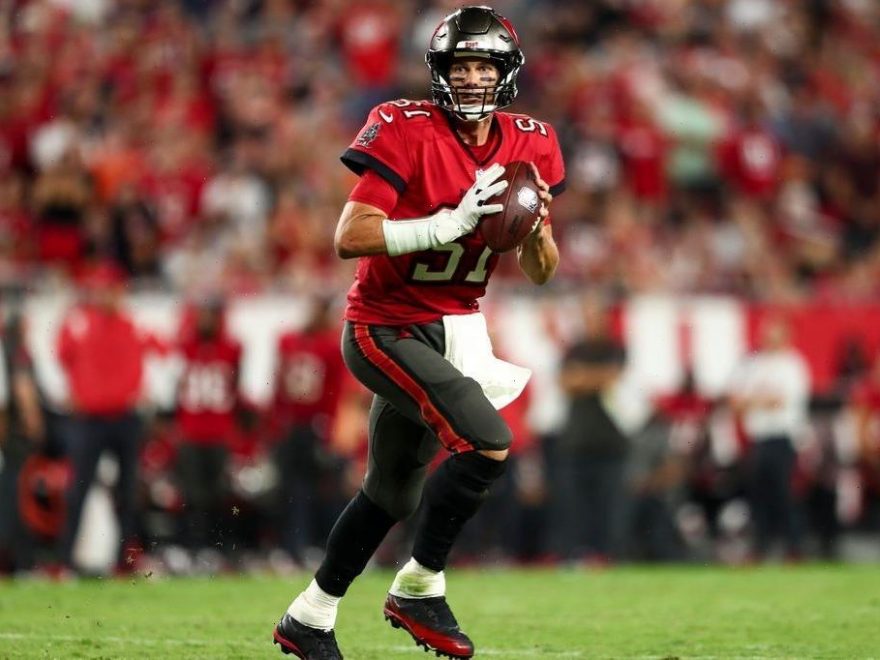 Father time is undefeated but has Tom Brady definitely reached that point? While many bettors are asking themselves that question, the market still supports the 45-year-old legendary quarterback — to a certain extent.

The Tampa Bay Buccaneers have received strong support from professional bettors for the second straight week, as Brady’s squad is now a three-point home favorite over the Los Angeles Rams (opened at 2.5). All this, despite riding a three-game skid with losses to the lowly Carolina Panthers and Pittsburgh Steelers.

“I have worked in this game for a long time and have reverential respect for some of the sophisticated syndicates and the incredible depth of the data they produce,” BetMGM vice president of trading Jason Scott told ESPN. “Right now, Tampa Bay and the fascination they have for betting them confounds and confuses me.”

When those behind the counter operate more as bookmakers than oddsmakers, sportsbooks inevitably have to move their numbers along with the market but they do occasionally find opportunities to inject opinion. “I’ve all but begged for the bets, using the cheapest available lines for a few sizeable bets because they have been so astonishingly mispriced,” PlayUp USA head of wagering and oddsmaking veteran Rex Beyers told ESPN, explaining that he has often invited wagers on the Bucs. “They are not a good football team.”

The defending Super Bowl champs have also underdelivered this season, stumbling to a 3-4 record. But for as bad as the Rams have looked, their four losses are excusable in that they all have come against likely playoff teams: Buffalo, Dallas and San Francisco (twice).

“It would be fair to say the bettors have been much quicker to abandon the Rams than the Bucs,” SuperBook executive director and oddsmaker John Murray told ESPN. “There is very little confidence in (the Rams) after these listless performances against Dallas and San Francisco.”

There’s not much to like about Tampa Bay either. They’re seemingly only still in the playoff hunt because of a weak division. Plus, while Brady has delivered time and time again throughout his career, it’s not guaranteed to happen this season. However, the Rams have such issues offensively and I firmly believe they’d have the league’s worst offense if not for Cooper Kupp.

I will begrudgingly back Brady and the Bucs in this spot. The Rams have major issues, and I have no desire to watch this game while needing Matthew Stafford to deliver with that shaky offensive line.

The numbers you need to know

While the last two Super Bowl champs have not lived up to expectations, this year’s championship favorites have been delivering. Both the Bills and Chiefs began the season as the two main contenders and that remains the case. Also, each is laying double-digits this weekend.

Kansas City is favored by 12.5 points against the Titans, making them the largest favorite over a team riding a five-game win streak in the Super Bowl era. Before you run to grab the points, I should remind you that Andy Reid is 15-8 ATS off the bye week. I spoke with a sharp bettor earlier this week and he pointed out that Tennessee got blown out by its best opponent, the Buffalo Bills. I do like KC in this situation.

Speaking of the Bills, they’re actually 11-point road favorites over the 5-3 New York Jets. In fact, the Jets are the largest home underdog by any team with a winning record since 2007. Early in the week, a bookmaker told me that his shop took sharp money on the Jets +13, which has driven this number down. I can certainly understand that rationale. Personally, I like under 46. The Jets defense is legitimate and for what it’s worth, division games this season are 27-12-1 to the under.

This industry is incredibly nuanced. It’s difficult to gauge what exactly moves the market without speaking to the appropriate people.

Sometimes that is impossible. Other times, if you know the right individuals, you get specific answers. Based on my intel, these are sharp wagers from the past week: Jets +13, Chargers -3, Panthers +7.5, Patriots -5, Vikings -3 and Raiders -2.