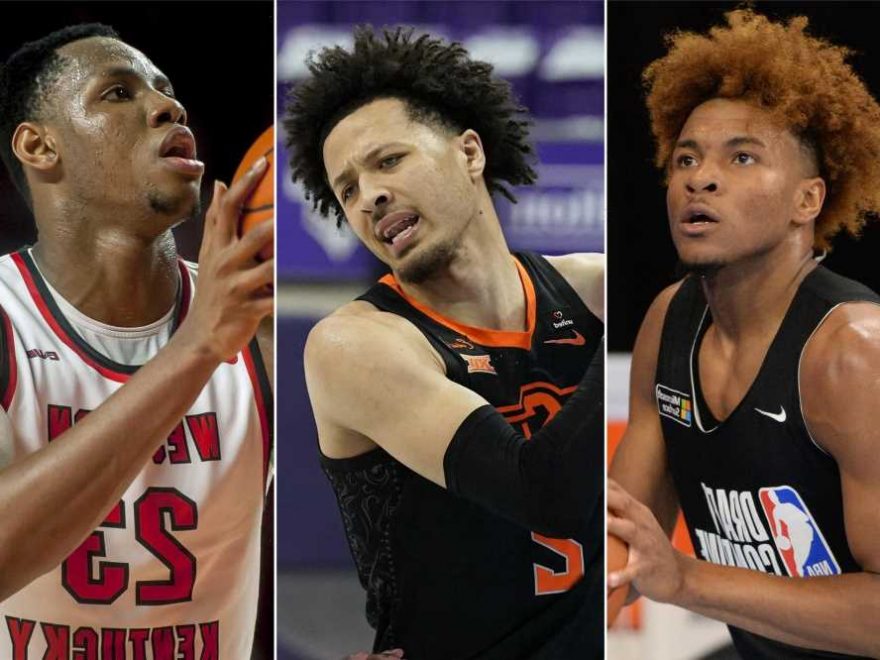 The NBA Combine has come and gone. The NCAA withdrawal deadline has passed. The wait for the most hyped NBA draft in years has reached the home stretch. In less than three weeks, names will start coming off the board.

It is a unique draft, with projected stars at the top and high-caliber depth throughout, setting up July 29 at Barclays Center to be a memorable evening.

Here is how The Post’s Zach Braziller sees the blockbuster event unfolding:

The Pistons haven’t won a playoff round in 13 years. But even they can’t mess this up. Cunningham has been the pick in this lofty spot for a few years now, a big lead guard who scores and distributes at an exceedingly high level. Just as importantly, he’s a high-character winner, capable of changing the losing culture in Detroit.

Suggs has the two-way talent and infectious personality to thrive as a franchise’s leading man. There’s more in the tank than he showed with loaded Gonzaga, and the freakish athlete, who was a star quarterback in high school, will be unleashed in Houston.

The archetype of a modern-day big man, Mobley can stretch the floor and finish above the rim, defend on the perimeter and protect the basket with his 7-foot-4 wingspan. Most years, a player of his ilk is the No. 1 pick.

There is an element of mystery surrounding the 19-year-old Green, since the offensively gifted 6-foot-6 guard took the new, lucrative G-League route rather than attending college. He did average 17.9 points in the G-League bubble, and some scouts think he is the most ready prospect at the offensive end.

If his perimeter shot develops, the Magic may have a foundational superstar. Worst case scenario, they will get a two-way force, a potentially elite defender and playmaker who will make others around him better.

Like Green, Kuminga opted for the G-League, and he posted strong numbers in the bubble. The native of the Democratic Republic of the Congo is an athletic marvel, but will need time to refine his jump shot and offensive repertoire.

No player improved his stock more during the last college basketball season than the Big 12 Defensive Player of the Year, who went from a borderline second-round pick all the way into the lottery. At 22, Mitchell is the oldest player in the lottery, but he should make an impact immediately for the Warriors, both in playing defense on the perimeter and getting into the lane on the other end of the floor.

Teams love his blow-by ability, which will be an even greater asset in the spaced-out NBA. If not for concerns about his perimeter shot — he shot under 30 percent from 3-point range last year — he could’ve landed in the top five.

The first step for the defense-allergic Kings to snap their string of 15 straight losing seasons is to improve on that end of the floor, and adding the vertically gifted Johnson is a positive step in that endeavor.

The Pelicans need to keep Zion Williamson happy to avoid an Anthony Davis situation. They can do that by adding an underrated shooter and defender like the versatile Wagner, who would make Williamson’s life easier.

There should be apprehension about his limited athleticism — Kispert struggled against the kind of length and quickness he will encounter at the next level in the NCAA Tournament — but the NBA is a shooting league, and Kispert is a potent marksman.

The Spurs are in rebuilding mode after missing the playoffs in back-to-back years for the first time in franchise history. Jackson could be a building block after he showed immense potential as a shot-blocking, rim-running force at Kentucky, and he’ll get time to develop in San Antonio.

A point guard in a forward’s body, Giddey is an intriguing prospect, averaging 11.3 points, 7.4 assists and 7.1 rebounds in Australia’s NBL last year. He could be the Pacers’ future at the one.

The Warriors will again score at an elite level now that Klay Thompson is expected back. The front court, though, remains thin and can use a physical defender to take pressure off Draymond Green.

Right now, Jones is showing only flashes of what he can be, but he possesses skills the NBA covets in bigs — shooting range, rim protection and explosive finishing ability.

The 18-year-old big man put up big numbers in the Turkish league (19.2 points, 9.4 rebounds, 2.5 assists), evidence of an advanced offensive repertoire for his age.

The Grizzlies know a scoring wing to compliment Ja Morant is a necessity. Moody is more than just a shooter, though. He projects as an exceptional defender with his 7-foot-1 wingspan.

Cooper scored and distributed at a high level for Auburn, and he can do that for the Thunder in smaller doses as Shai Gilgeous-Alexander’s backup.

The Knicks need to add two point guards: a veteran and a prospect. McBride fits into the latter category. His defensive intensity, motor and impressive length for a guard will warrant meaningful minutes immediately.

Butler can back up Trae Young or play alongside him. The Most Outstanding Player of this year’s NCAA Tournament does a lot well, from shooting to distributing to defending, and he’s accustomed to sharing the backcourt with talented teammates.

Efficient offensively and more than capable defensively, the 6-foot-6 wing is the kind of inexpensive 3-and-D contributor the Lakers could use. Duarte’s age (24) is the only reason he isn’t a lottery pick.

He would be a lottery pick if his 3-point shot were further along. Still, he jumps through the roof and has the size and length to be a valuable two-way asset as a physical wing.

The skilled Johnson drew headlines last season at Duke for all the wrong reasons after starting out as a projected top-five pick. He struggled immensely, dealt with a foot injury, then “opted out” of the season in mid-February. Talent, however, always gets extra chances.

The SEC Newcomer of the Year does one thing extraordinary well: He scores. The other facets of his game will take time, but initially Thomas will at least provide punch off the bench for the Clippers.

Backcourt scoring depth should be a priority for the Nuggets, with Jamal Murray’s injury status uncertain. That would make the first team AP All-American, who significantly improved his 3-point shooting last year, a fit in Denver.

DeAndre Jordan is at the end of the line, and Nic Claxton is still far from a sure thing. The Nets’ one weakness — other than the health of their stars — is in the paint.

Yes, there are athleticism and positional questions. There was a similar sentiment about former Villanova stars Jalen Brunson and Mikal Bridges, too, and their shot-making and basketball IQ are similar to Robinson-Earl’s entering the league.

Chris Paul can opt out of his deal and Cam Payne, Langston Galloway and E’Twaun Moore will be unrestricted free agents, creating a need for this well-regarded defender and shooter.

Mann, who could be Mike Conley Jr. insurance, shoots the 3-ball at a high clip (40.2 percent), can guard multiple positions and has vastly improved his playmaking skills.