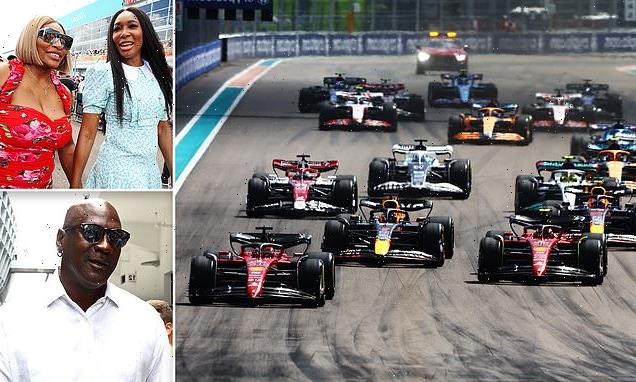 Miami Grand Prix LIVE: Max Verstappen breezes past Charles Leclerc on lap nine to take the lead after a flying start to star-studded race in Florida… with Lewis Hamilton down in sixth

Here is Sportsmail’s live blog for updates as the Formula One season continues at the Miami Grand Prix.

Alonso drives for Alpine not Renault I know, but there’s no Alpine logo sadly.

Alonso’s team does a 5.7s pitstop, well above the average of 2.5s, and now he’s down in 13th, below team-mate Esteban Ocon.

Hamilton and Russell have recovered from poor starts to go from eighth and 15th respectively to 11th and sixth.

Decent jobs from the pair of them. On for some decent points as things stand – although obviously nowhere near challenging the top four.

Yep, sadly Zhou is out.

Ooh, Charles Leclerc’s Ferrari is struggling, the front right tyre acting up a bit. Verstappen is extending his lead over the Monegasque and if this carries on, the Dutchman could drive off into the distance and never look back.

An unusual outing for the four-syllable German word from Martin Brundle on Sky.

He’s saying Bottas will have a smile on his face seeing the Mercedes of Lewis Hamilton behind him after the team let him go to sign George Russell.

Sorry for all the exclamation marks, I’m just excited. It’s already shaping up as a super race.

…and he does! The straight-line speed of that Red Bull is absolutely brilliant and it shows as Max overtakes the Ferrari to take the lead!

Max Verstappen is hot on the heels of Charles Leclerc, within one second which means he can activate the DRS to try and overtake…

Shame, Alfa Romeo’s Guanyu Zhou has a problem and pulls into the pit, possibly facing a retirement.

Oh, Hamilton reckons his car took a knock in that clash with Alonso. He’s locked up a couple of times, could that bang affect the Mercedes?

In the below picture it looks like Sainz was a nose ahead of Verstappen, but the Dutchman braked slightly later and nipped ahead of the Spaniard.

Leclerc and Verstappen are pulling clear of Sainz and Perez in third and fourth.

Oof, replays show Alonso did nudge Hamilton. Probably not worth a penalty in my book though. 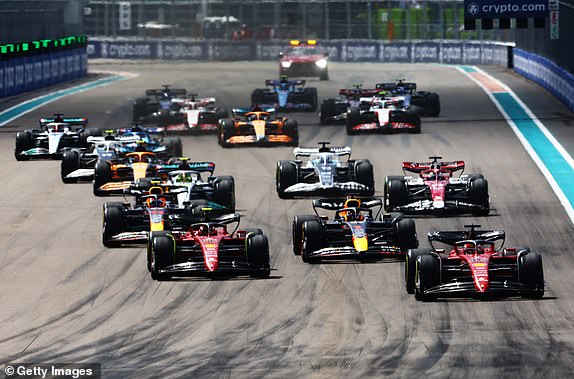 Oof, Lewis Hamilton, who started P6, is down to eighth and complaining Alpine’s Fernando Alonso hit him in the first lap. But Hamilton overtakes him back!

George Russell struggling on the hard tyres too and is down in 15th.

It was a stodgy start from Carlos Sainz in second and Max Verstappen squeezes him out!

Brilliant start for Red Bull but a bit sloppy from Sainz.

Off we go at the Hard Rock stadium then!

T-minus about five minutes until lights out…

This is gonna be a cracker, I can feel it. 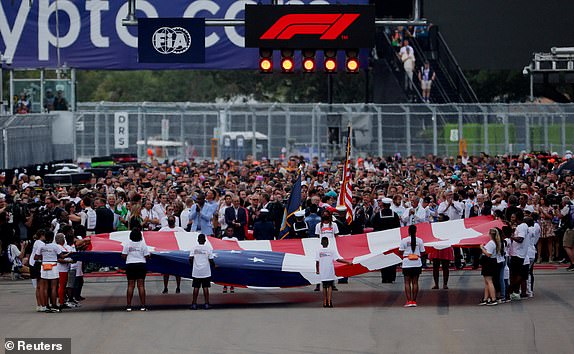 But not for Despacito singer Luis Fonsi, who belted out the US national anthem with gusto to massive cheers.

Aston Martin, however, have apparently kept their fuel too cold and have opted to take a penalty and start the race from the pit lanes so they can warm up the fuel.

‘The show [Drive to Survive] has done a lot for Formula 1 in the US. F1 coming here, you can see the excitement and what it’s all about. I think it’s going to be an amazing race and it will be a close one.

Sergio Perez called it ‘a joke’. Fernando Alonso said it was ‘not F1 standard’.

The issue is the lack of grip and the gravel off line, which drivers believe will make overtaking very difficult.

Could be a couple of crashes if there are mistakes…

On the one hand, Max said: ‘Overall, I was pretty pleased with qualifying… I was pleased to be so competitive. Overall we did a good job but we have to stop making the weekends so difficult. The car is handling quite well and I am looking forward to it.’

On the other, he said: ‘I have only done four or five laps yesterday and you cannot afford that on a new track because it is very critical to do laps and understand the car. On a street circuit it is a lot more difficult and we basically failed on that side.’

He added the weekend was ‘incredibly messy and we just make it super-difficult for ourselves’. Oof.

The pole-sitter told Sky: ‘Expectations, I don’t have any, I just want to go for the win.

‘It’s going to be a tight battle, it has been close all year and it will be the same again. Maximising the start will be important and hopefully we can have a good race.’

Haha, now Brundle had a full conversation with who he thought with Kansas City Chiefs quarterback Patrick Mahomes.

He was actually talking to basketball teenage star Paolo Banchero. Brundle’s wearing a wonderful colourful shirt and having loads of unashamedly awkward conversations with random people.

To be fair, I’d watch this all day if it were a 24-hour news channel.

The front row is locked out by Ferrari, with Leclerc and Carlos Sainz, with two Red Bulls in the second row, Max Verstappen then Sergio Perez.

Two wild horses and two raging bulls. It promises to be a super quick start!

Elsewhere, DJ Khaled has just told Martin Brundle ‘another one’. The crossover we didn’t know we needed.

Charles Leclerc, Ferrari’s wonderful young Monegasque driver, sits on pole position and has won from the front row twice this season already, in Australia and Bahrain.

Can he make it a third today?

And we’re not just talking about the drivers! Michelle Obama was there too, what a star-studded and glitzy line-up we have.

Will the drama on track live up to the huge crowd? Let’s hope so…

Lights out in about half an hour. 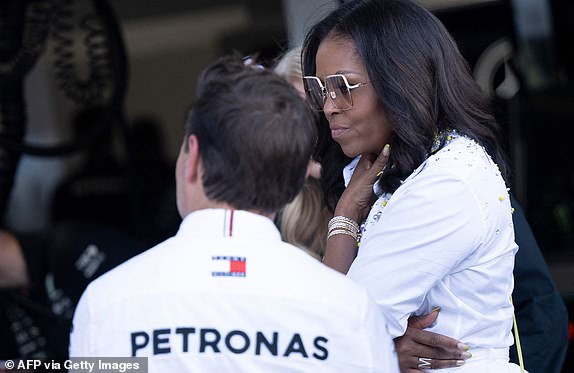 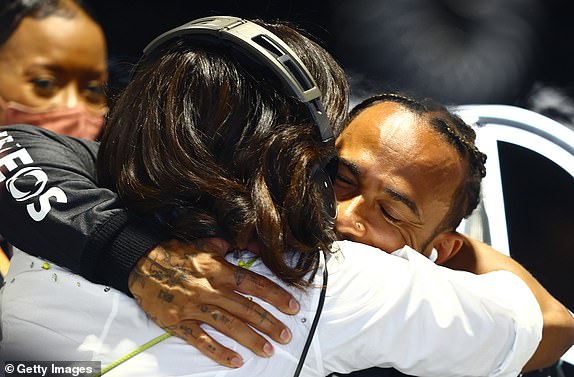 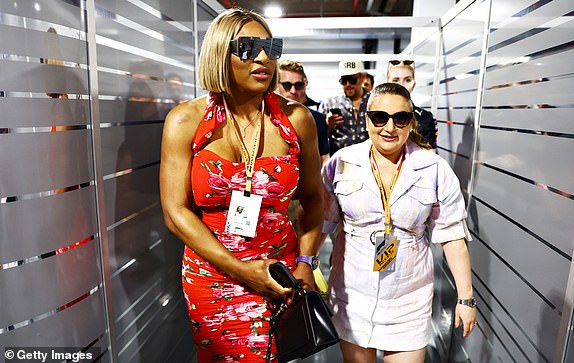 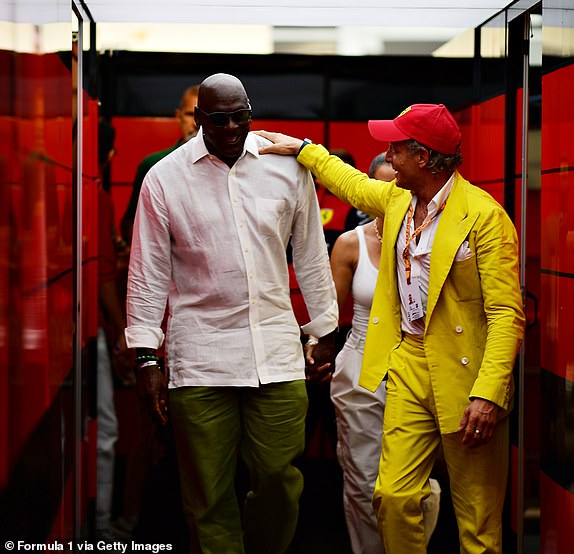 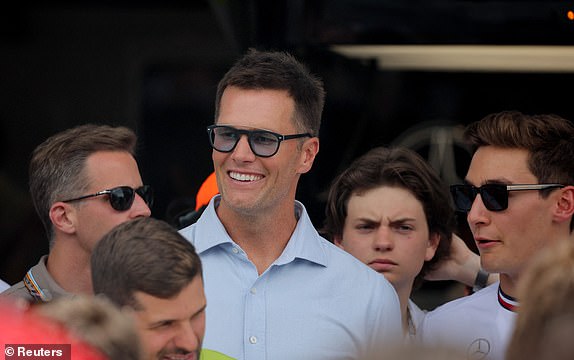 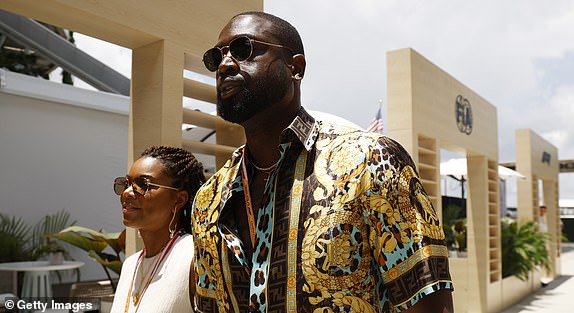 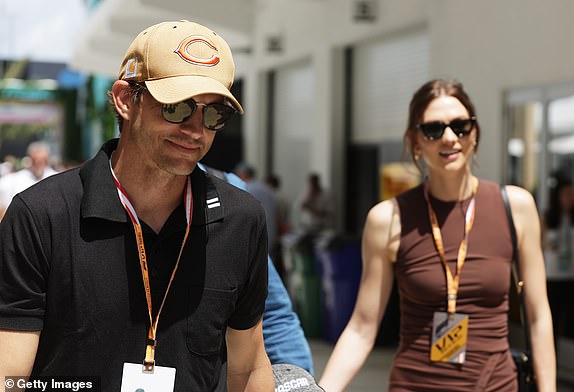 A very interesting weather update for you: it is currently 31 degrees C in Miami, with humidity at nearly 60 per cent. Hot, sweaty and sticky.

BUT – there is a chance of rain later during the race, which would make things very interesting… 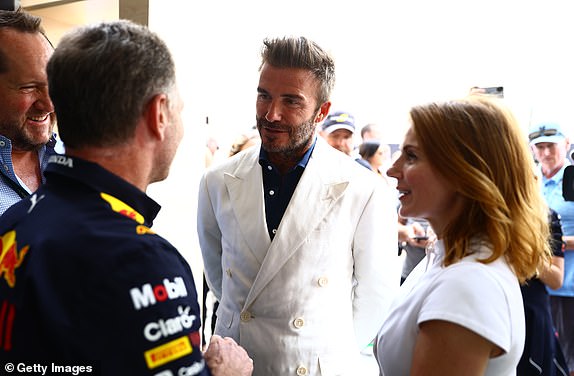 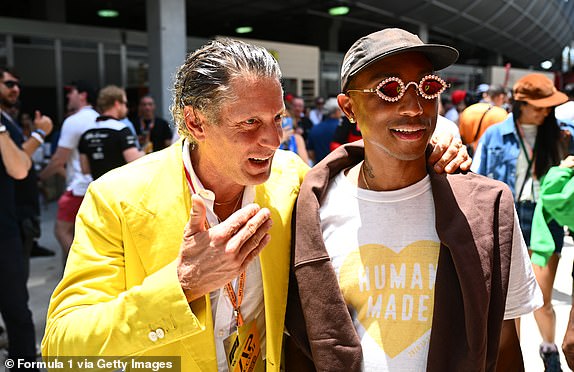 Who’s ready for this one then?! 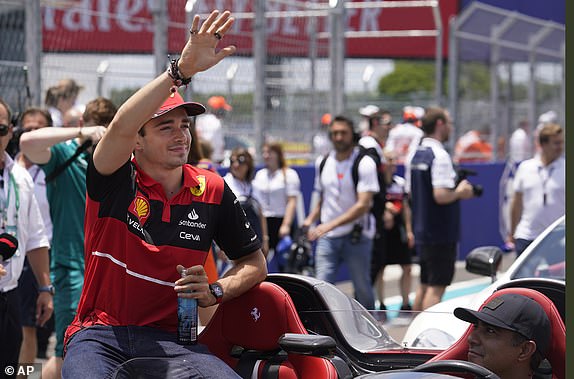