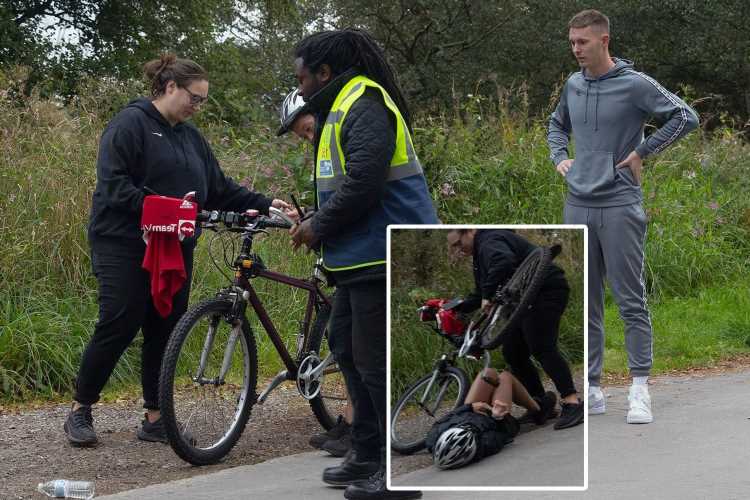 DEAN HENDERSON rushed to help a cyclist after she fell off her bike outside Manchester United's training ground on Friday morning.

The cyclist is claimed to have collided with a Red Devils supporter who was waiting outside the Aon Training Ground.

Man Utd are currently in training for their clash against Aston Villa on Saturday, with kick-off at Old Trafford 12.30pm.

And as some fans headed down to Carrington to get a peek of their heroes, one of them collided with a cyclist.

Henderson had been driving into the Aon Training Complex ahead of his busy day with Ole Gunnar Solskjaer and his coaching team.

But, risking reporting late, Henderson hopped out of his Bentley 4×4 and rushed to make sure both parties were well.

The England goalkeeper, 24, dashed over after the cyclist hit the ground.

Henderson then stayed for a few moments to ensure no one was hurt, before driving into training.

United go into Saturday's clash with Aston Villa fresh from their Carabao Cup third-round defeat at the hands of West Ham on Wednesday night.

Ahead of the Villa game, ex-England captain Ince told The United Stand: "I get that Sancho is still learning, he's still young.

"But this is not a FIFA game, it's not all about dribbling and dribbling and trying to beat two, three, four players or little flicks and that.

"Yeah, it's nice when they come off but the likes of Sancho and Lingard, all these flicks, just play proper football."