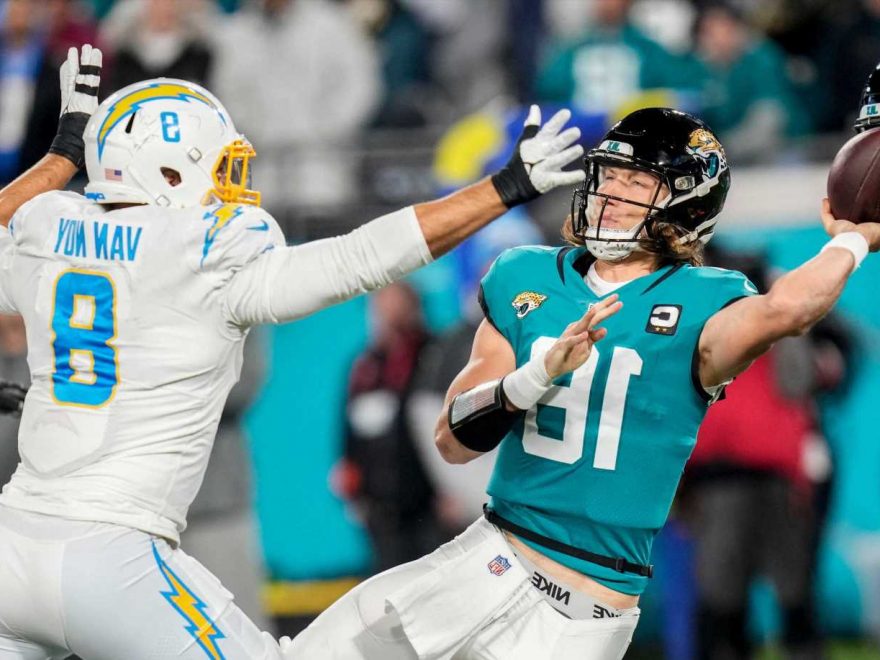 Trevor Lawrence mixed four interceptions with four touchdown passes as he engineered the Jacksonville Jaguars’ comeback victory over the Los Angeles Chargers in the AFC wildcard round.

Austin Ekeler made the most of the possessions that flowed from Lawrence’s early turnovers, with the Los Angeles running back scoring twice on 13 and six-yard runs to go with a Cameron Dicker 22-yard field goal to put the visitors up 17-0 after just one quarter.

Tight end Gerald Everett further sparked the Chargers halfway through the second quarter with a textbook drag route to scoop up a nine-yard Justin Herbert pass and push over for a touchdown.

Dicker kicked a 23-yard field goal minutes later to make the score 27-0, but the half then ended as a preview of what was to follow with Evan Engram catching a nine-yard touchdown pass from Lawrence to get the Jaguars on the board.

The Jacksonville secondary did a solid job during the second half as they managed to keep the previously free-scoring Chargers to just three points from four possessions.

Lawrence came out firing after the break with touchdown passes to Marvin Jones, Zay Jones and Christian Kirk, with home fans delighted as the quarterback himself jumped for a successful two-point conversion that made it 30-28 with five minutes left in the fourth quarter.

Lawrence again took his team down the field to have them in position as time expired for Riley Patterson’s 36-yard field goal, which just stayed inside the right upright to give them a 31-30 victory and passage to the divisional round.

In the night’s other game, Brock Purdy became the first rookie ever to throw three touchdown passes and rush for another score in a play-off as he led the San Francisco 49ers past the Seattle Seahawks 41-23.

Purdy went 332 yards through the air had and no interceptions, while team-mate running back Christian McCaffrey rushed for 199 yards as the Seahawks collapsed in the second half and the Niners advanced to the NFC divisional round for the second straight year.