FOR so long it had seemed like vintage Jose Mourino from pre-match press conference through to the 90th minute.

Title mindgames from the Spurs boss in the build-up, a trademark Son Heung-Min breakaway equaliser, several chances to snatch an improbable victory. 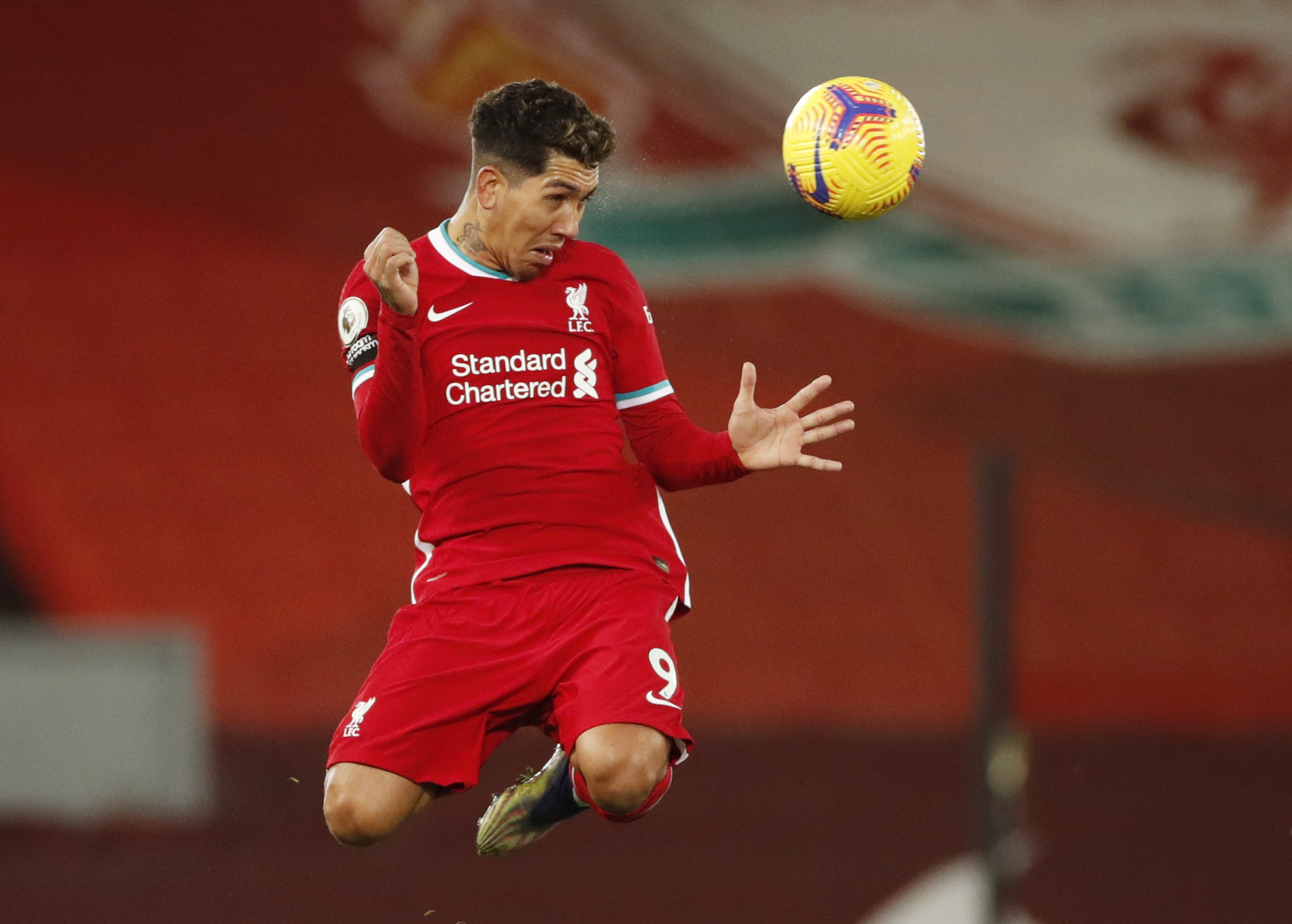 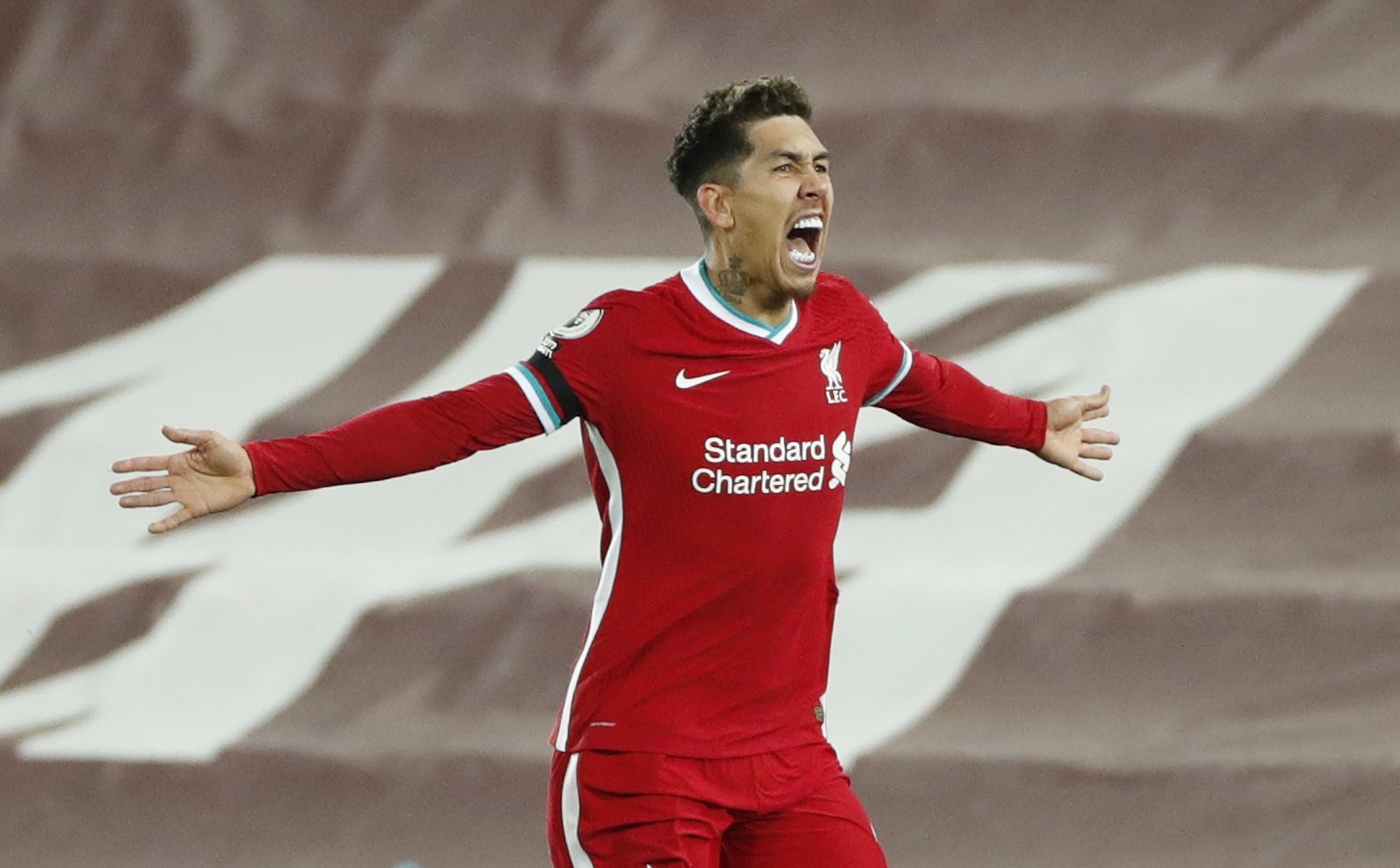 Yet Roberto Firmino headed a late winner and a frustrated Mourinho ended up scowling at a grinning Jurgen Klopp in a feisty-looking touchline exchange at the final whistle.

And Liverpool, a patched-up Liverpool no matter what Mourinho says, are three points clear at the top.

Now that Firmino has started scoring at Anfield, the Liverpool striker is finding it hard to stop.

The Brazilian striker went through until the final home match of the season without a home league goal in their title-winning campaign last term – but has now snaffled three alraedy firing the defence of Liverpool’s crown.

Still, this was a night when Spurs proved themselves as serious title contenders – going so close to becoming the first team to avoid a league defeat at Anfield in a meaningful match since January 2019.

It was an impressively mature performance from Spurs, showing a little more ambition than we might have expected from a Mourinho team away from home in a title six-pointer.

They soaked up oceans of pressure, especially in the opening half-hour, but there was great conviction and speed of thought whenever they ventured forward.

They remain the greatest threat to Klopp’s men in this strange old season. 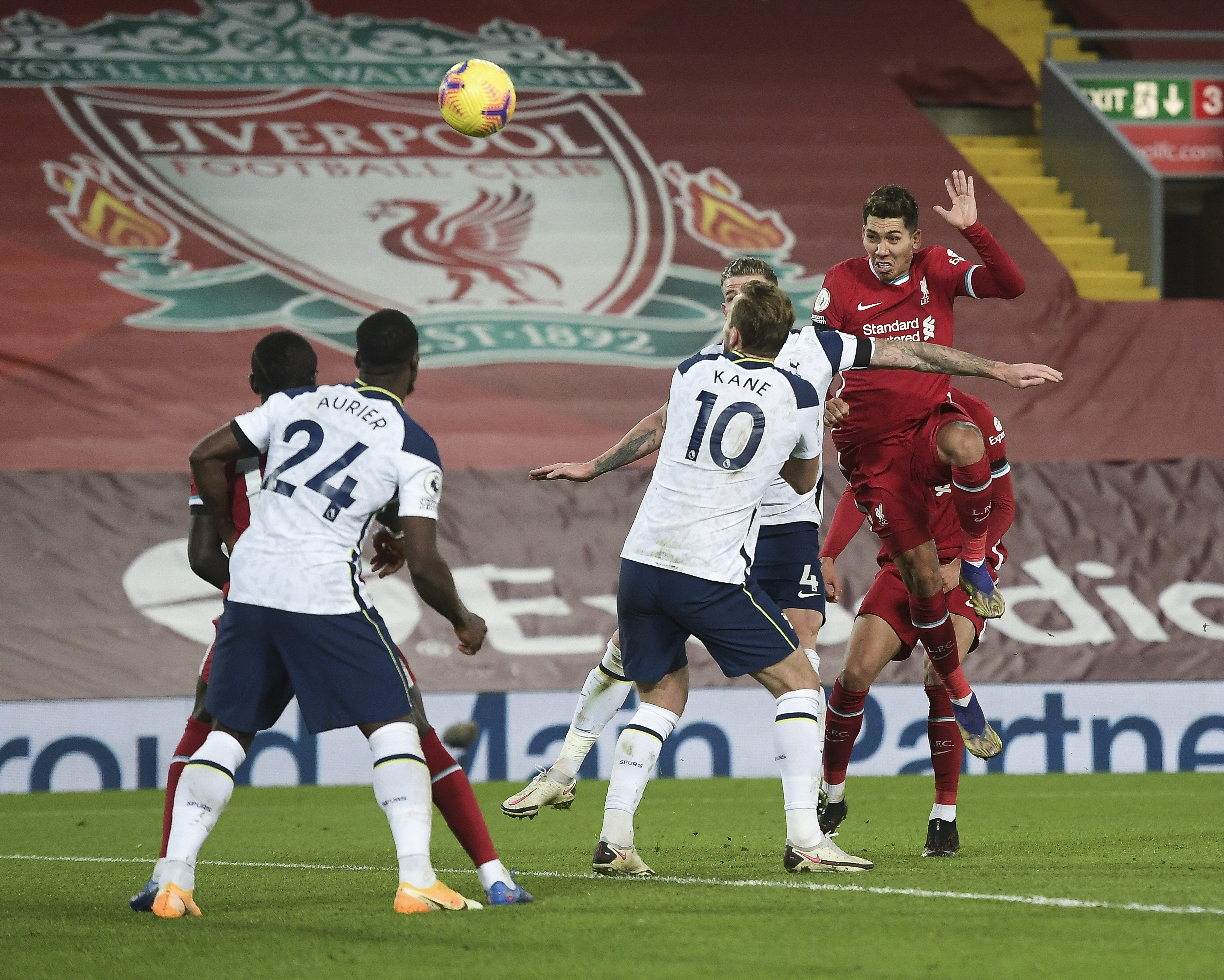 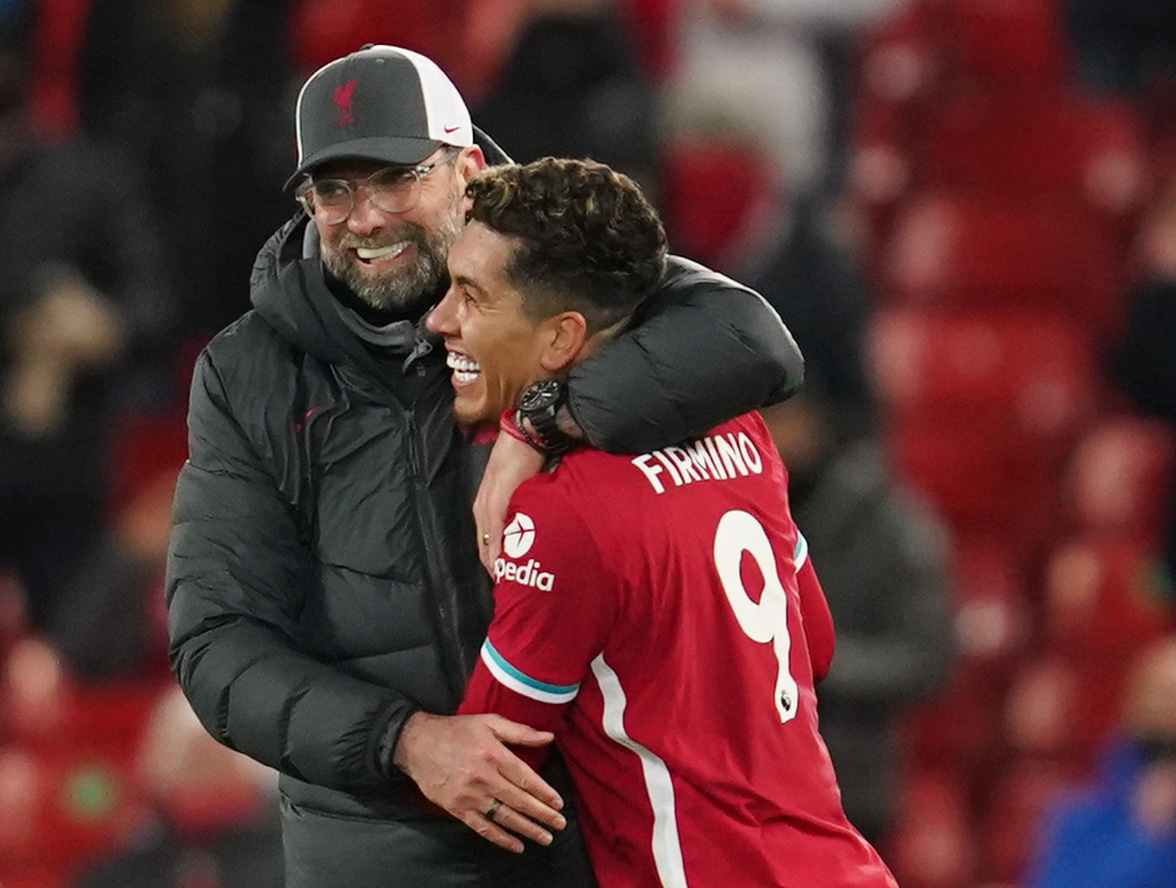 Mourinho, the sly old boots, had been claiming his team were ‘ponies’ rather than genuine title-race contenders – but his pre-match press conference was a dead giveaway.

If he truly didn’t believe in Tottenham’s chances, then he would not have cranked up those pre-match mindgames in such vintage fashion.

The Spurs boss scoffed at Liverpool’s injury problems and calculated the numbers of days Klopp had enjoyed to build his mighty team.

It was all designed to take pressure off his players before this summit meeting.

Yet whatever Mourinho’s suggestions about Klopp’s  being over-egged, the Reds boss was forced to hand a Premier League debut to 19-year-old Rhys Williams, with Joel Matip having failed to recover from a back problem.

Mourinho had also been Grinching about the unfairness of some clubs – including Liverpool – being allowed fans, while those languishing in tier three are not.

But the presence of 2,000 fans at Anfield allowed a more fitting tribute to Liverpool’s much-loved former boss Gerard Houllier, who died on Monday aged 73. 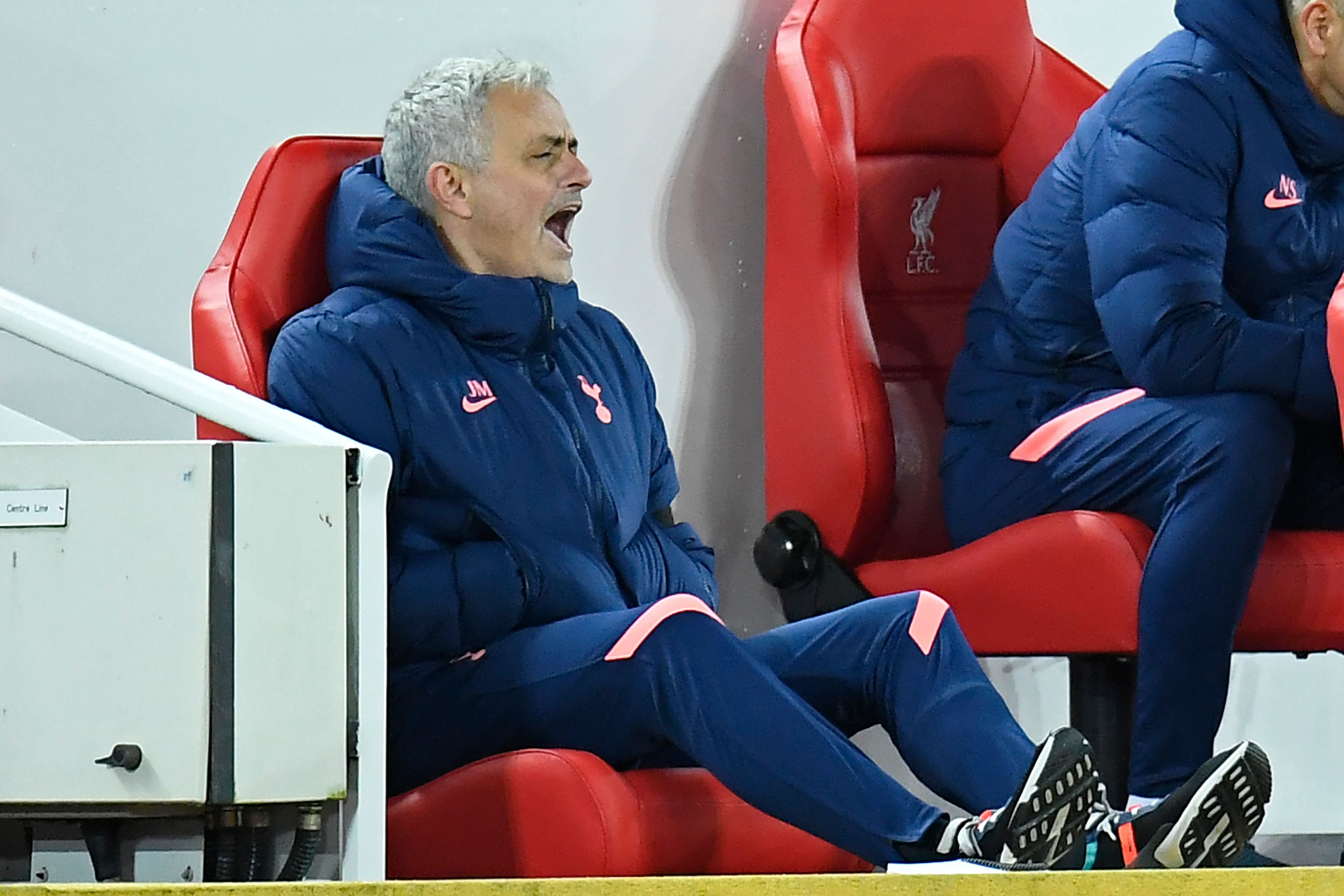 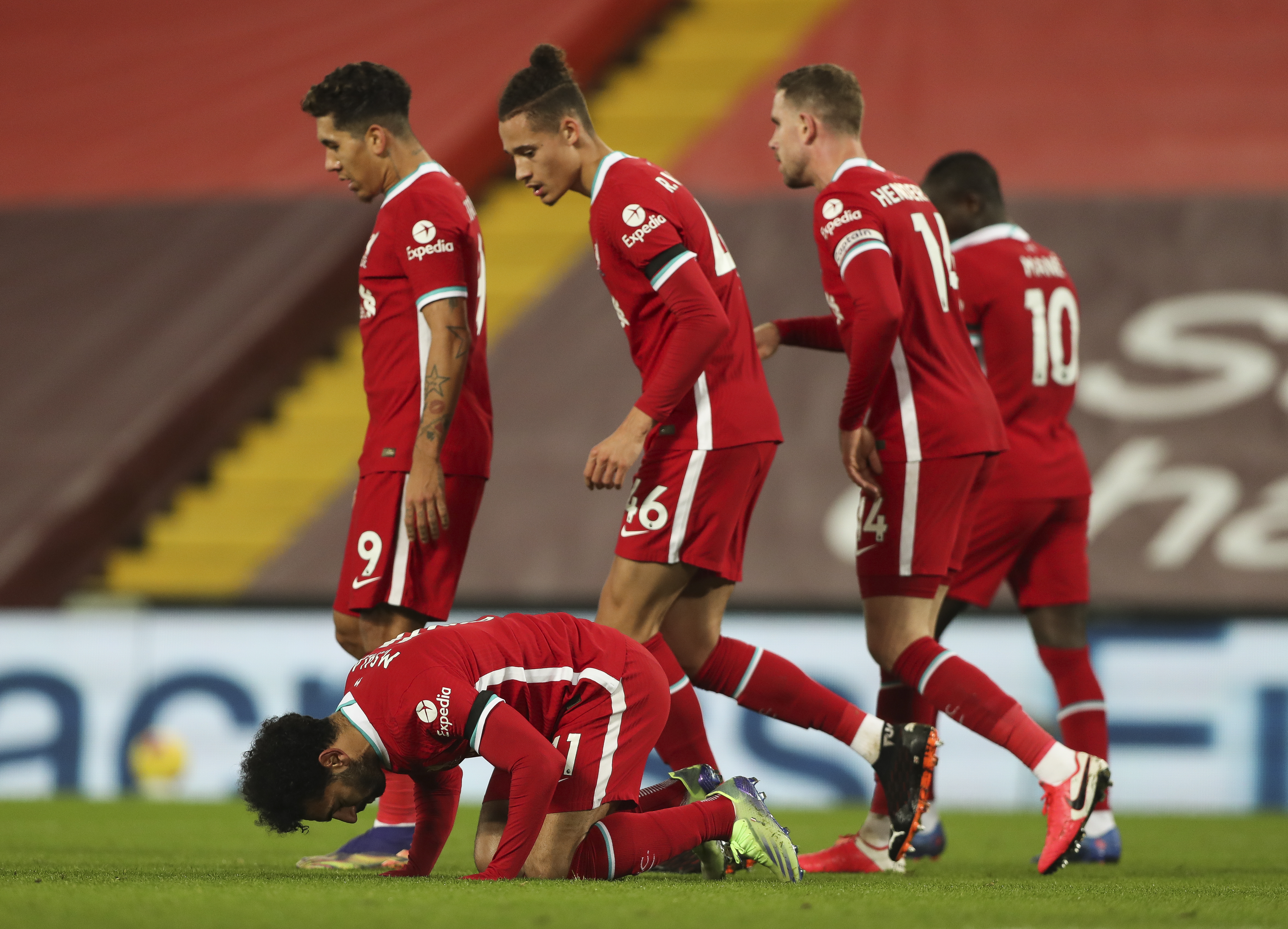 Weirdly in as season when home advantage had largely dissolved, Liverpool are 100 per cent at Anfield, yet without a Premier League away win in five attempts.

They began, as they usually, playing at a frenetic tempo, high pressing, rapid passing, murderous intent.

Andy Robertson swung in a free-kick and Roberto Firmino having a downward header saved by Hugo Lloris, then Eric Dier surviving a penalty shout as he won an aerial challenge with Salah.

Dier has been penalised for less obvious handballs this season but Spurs escaped.

Then a dash and cut-back from Robertson dash for Salah to shoot straight at Lloris.

Spurs, penned in and claustrophobic, finally buckled on 26 minutes, though only with a huge dollop of luck.

Curtis Jones teed up Salah, whose shot deflected off Toby Alderweireld and looped up over Lloris. 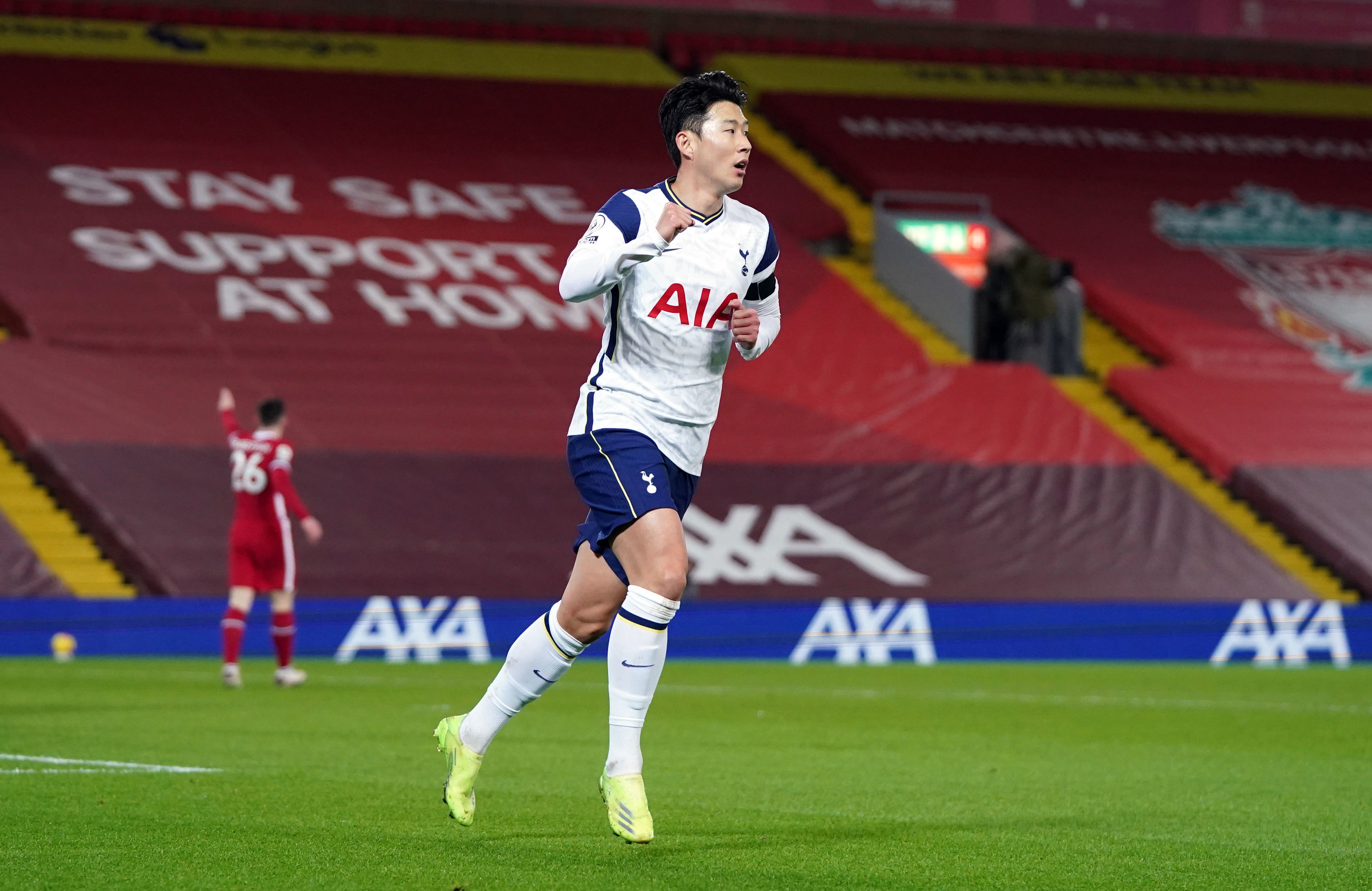 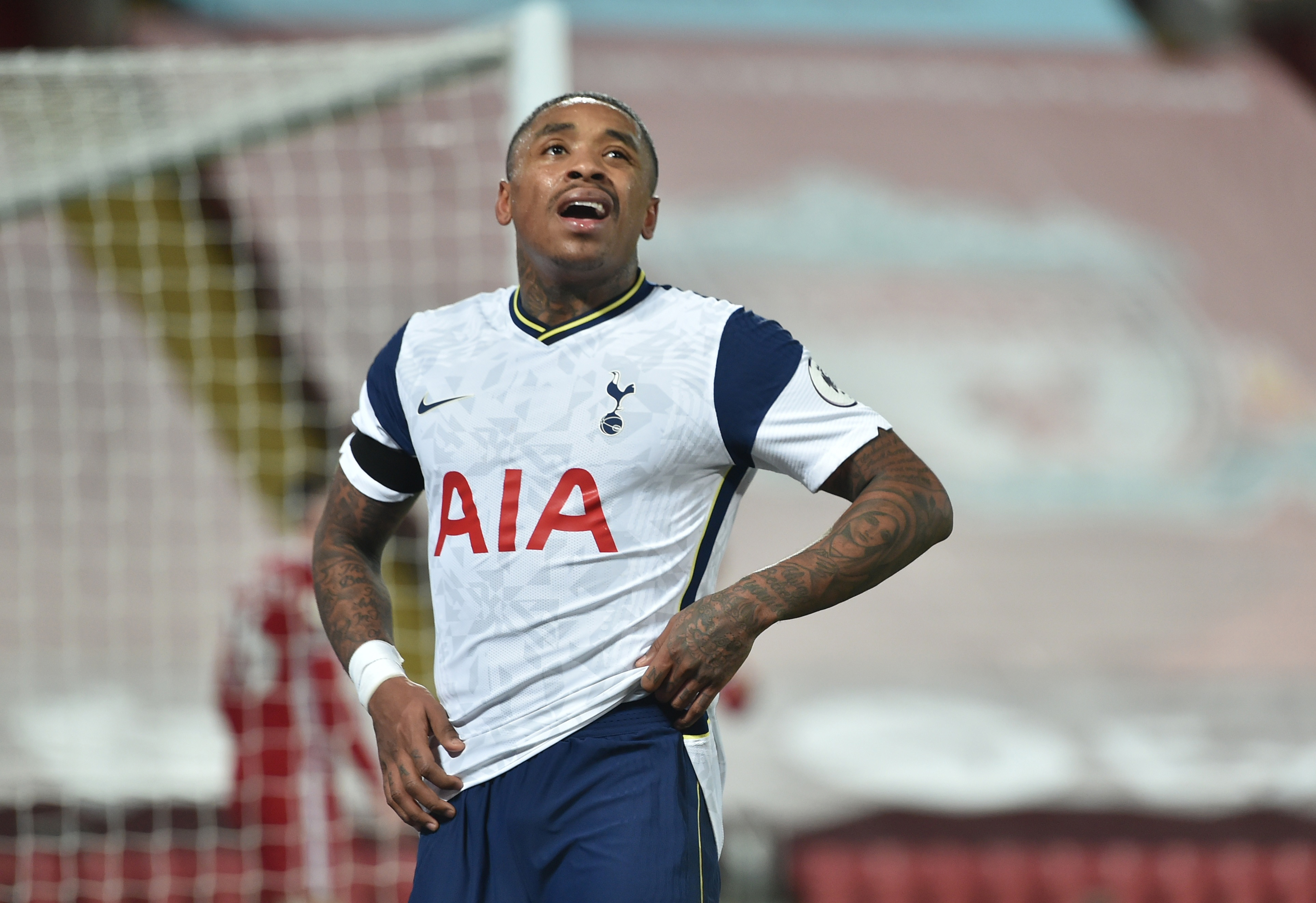 Klopp punched the air maniacally and Jones might have added an immediate second when he cut inside and shot straight at Lloris.

But then, on pretty much their only serious attack of the first half, Spurs levelled.

Gio Lo Celso, a bolder than usual selection from Mourinho, played a cute release pass with the outside of his boot and Son rushed through to give Allison the eyes and slot home, foxily, inside the near post.

The VAR lines had to come out to suggest that Williams had played on Son by a fraction of an inch.

Lloris made a fine plunging from Firmino but straight after the break, Spurs began to threaten.

Steven Bergwijn got behind Trent Alexander-Arnold and screwed a shot wide across goal.

Then Allison botched a clearance, Kane intercepted and almost beat the Liverpool keeper with a lob. 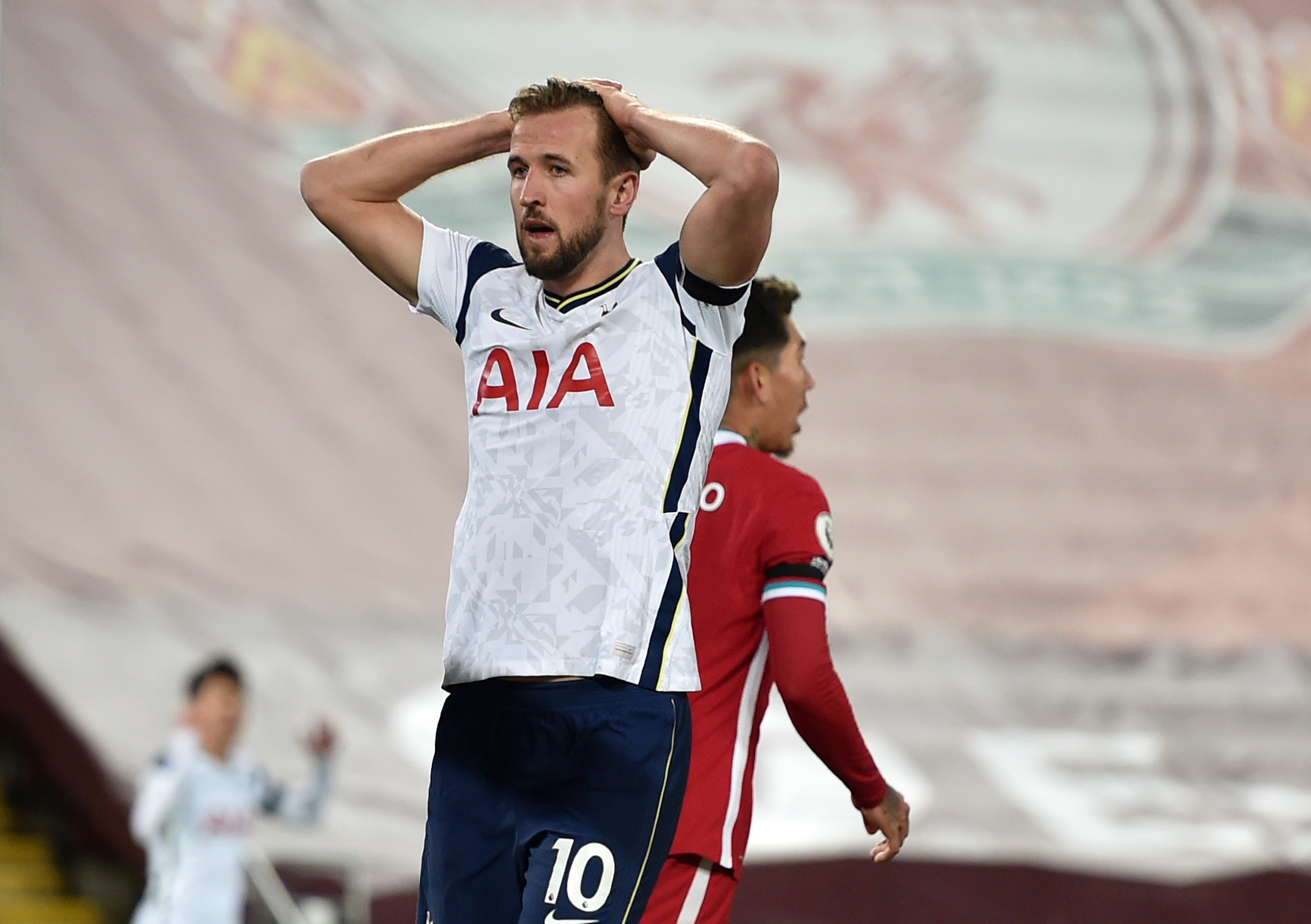 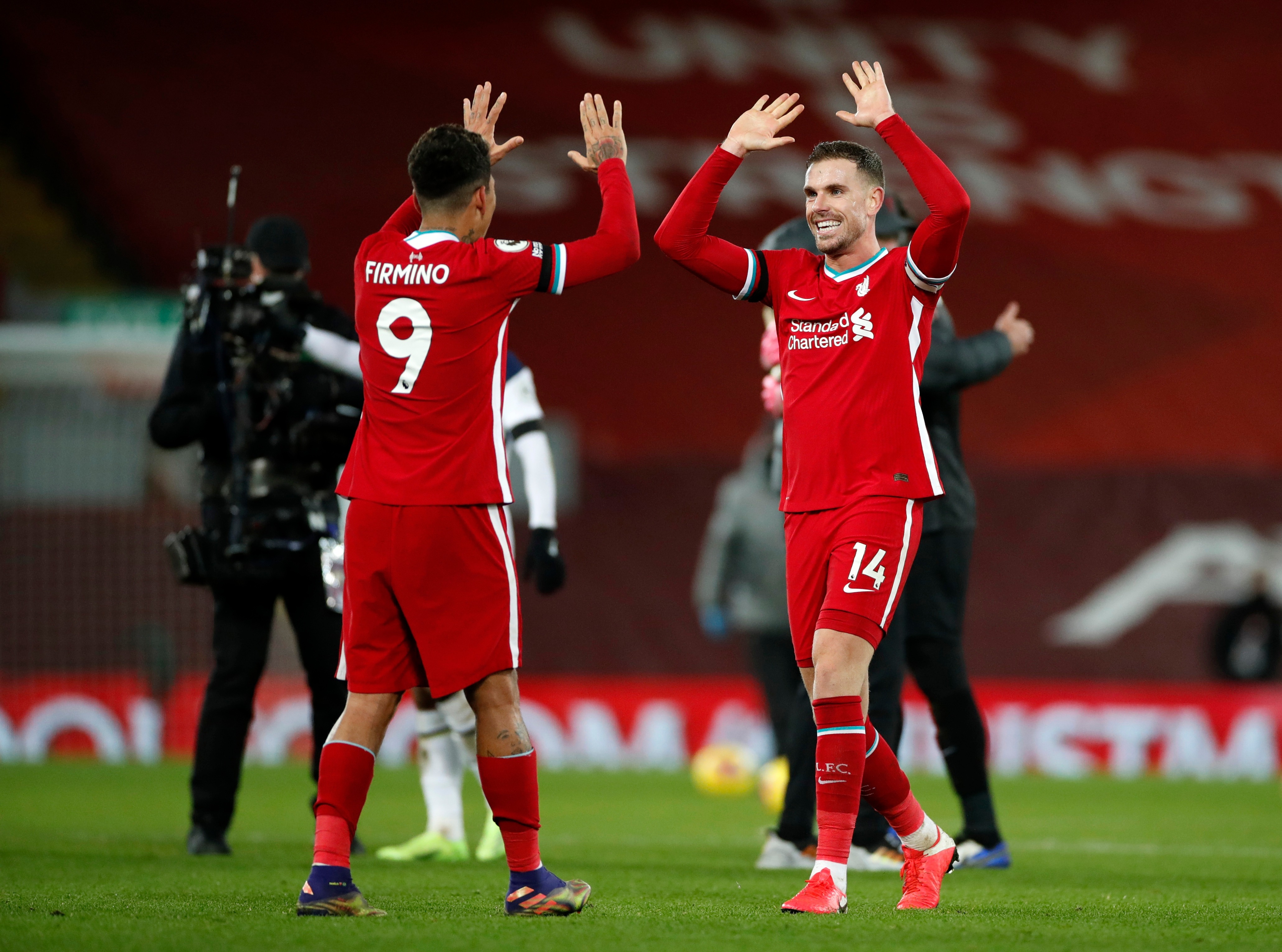 And Mourinho even made a positive substitution, sending on Lucas Moura for Lo Celso.

Then Spurs went route-one and so nearly took the lead – a Lloris punt, headed flicks from Kane and Son, before Bergwijn’s shot was touched on to the post.

From the resulting corner, Kane should have buried a header which went into the ground and over.

Liverpool then began to reassert themselves with a sustained spell of pressure, Sadio Mane twisting and shooting against the bar from close range.

Then Mourinho got seriously daring and sent on the lesser-spotted Dele Alli for the final five minutes in place of Son.

But when the Reds forced a 90th-minute corner, Firmino got ahead of Alderweireld to power home a header.

They always seem to find away.