LEWIS HAMILTON hopes F1 drivers will become "more united" when it comes to taking a knee before F1 races.

There were much-improved scenes at Silverstone, with a video message from all 20 drivers to back the sport's "end racism" and "we race as one" campaigns. 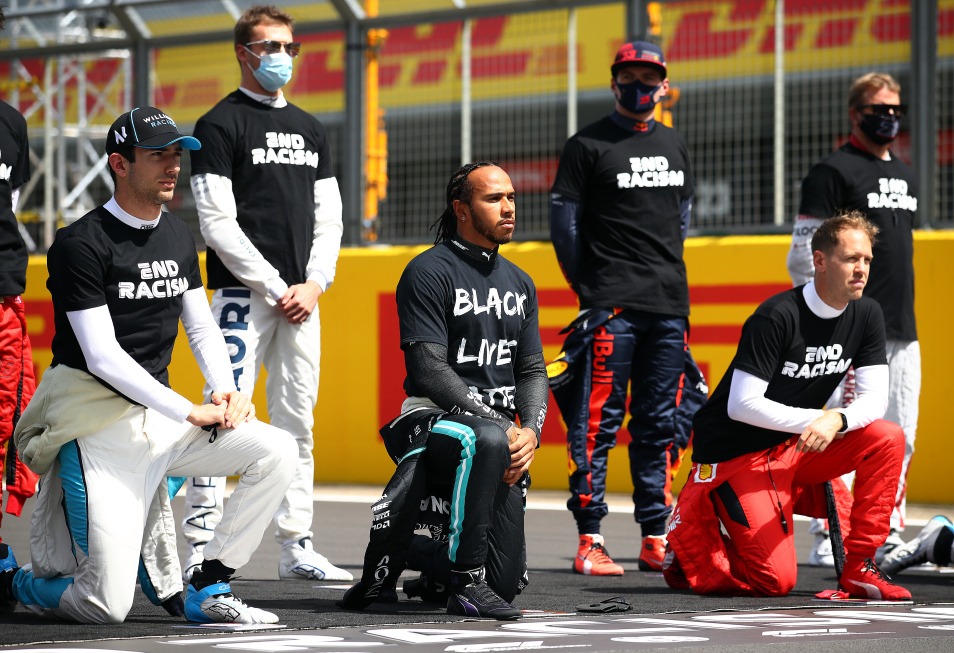 However, the decision to kneel has split the grid, with six drivers continuing to stand while Kevin Magnussen also stood for the first time last Sunday.

And Hamilton has drawn comparisons with the Premier League and says a drivers' nationality should not prevent them from also taking a knee.

He said: "I'm not going to tell you my opinion on whether everyone needs to or not.

"But if you look at all the other sports – look at basketball, look at football, Spanish teams, Italian teams, teams all over the world – no matter what nationality or mixture, they are all doing it united.

"But when the reason for perhaps not doing it is how you think it would be perceived in your country, all you have to do is look at the other sports, because they are doing it.

"So I do hope that bit by bit we can come more and more together and more united.

"I am really proud of all the drivers wearing the end racism t-shirts and I think there is progression.

"I don't know why Magnussen hadn't done it, I've not spoken to him. But I think we will just try to improve each other's understanding.

"The most important thing is that the drivers continue to have respect for each other.

"Maybe there needs to be more conversations. I know Formula One hasn't spoken to any of the drivers, and nobody else has probably spoken to them individually."

Meanwhile, Formula One MD, Ross Brawn, said he was pleased by the drivers' pre-race message to support their campaign to help end racism and improve diversity in the sport.

He added: "After a challenging few weekends, the message was clear ahead of the British Grand Prix.

"The drivers, teams and sport stand united in the fight against racism. The video featuring all of the drivers on the grid, voicing their support for the initiative, was powerful, as was the collective respectful stand they took ahead of the national anthem on the grid.

"Something Formula One can be proud of, and something that will now be backed by real actions."