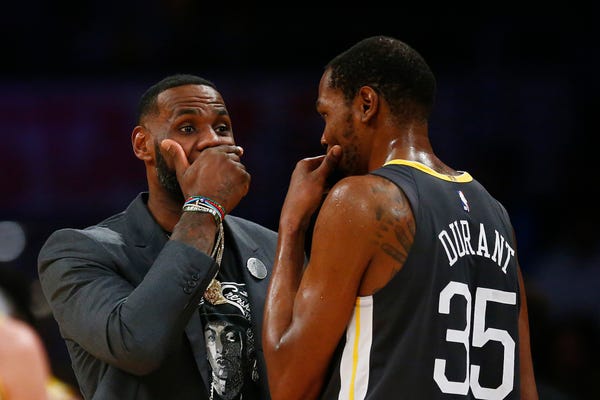 LeBron James, not Giannis Antetokounmpo, should have been named the NBA's Most Valuable Player this season, according to Brooklyn Nets star and one-time MVP Kevin Durant.

Antetokounmpo was named MVP for the second year running last week after helping the Milwaukee Bucks win the Eastern Conference and reach the semifinals of the play-offs, where they were ultimately beaten by the Miami Heat.

James told reporters after that he was "pissed off" he didn't win, and Durant — who was the league's MVP in 2014 — says he understands why.

"The criteria is the regular season, but I understand," Durant told the Joe Budden Podcast, as per Essentially Sports, adding: "I think that they should evaluate the whole season, playoffs included.

"If you include the playoffs, the Bron is easily the MVP. But I see why, with the rules now, why Giannis was the MVP. His numbers [were] crazy."

Despite Giannis' superior statistics, Durant isn't the only one who believes LeBron should have been named MVP, with Shaquille O'Neal also backing the Lakers star to have been the division's best player this year.

"If you're the best player in the world, you should always get an MVP. Period."