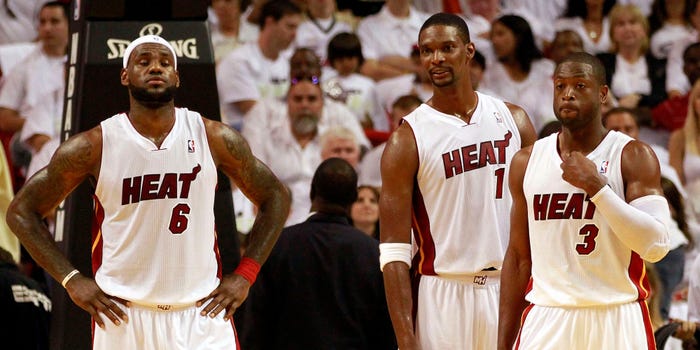 Chris Bosh says that LeBron James told him he was leaving the Miami Heat in 2014 via a text, and that at first he thought it was a joke.

Speaking on the "All The Smoke" podcast on Thursday, Bosh added that he was initially angry about the manner in which James' told him of his decision to return to the Cleveland Cavaliers.

"Through a text," Bosh said when asked how James broke the news of his departure. "I thought he was BSing, and then about 10 minutes later it's everywhere.

"I took offense to it, to be honest with you, at first. I was only thinking of how I felt about it."

Alongside Dwayne Wade, James and Bosh – known collectively as the 'big three' – spent four years together with the Heat between 2010 to 2014, winning two NBA titles.

In their final season together, they were beaten by the San Antonio Spurs in the NBA finals. Bosh says he was ready for retribution the next year, however it was not to be.

"At the time, in my mind, I was ready to put the team together because we had just lost," Bosh said. "So we wanted to put something together so we could win. And it really didn't go like that."

James went on to to guide Cleveland to its first ever NBA title, while Bosh and Wade remained with the Heat for a further two years before Bosh retired and Wade re-joined forces with James in Cleveland on a one-year contract.