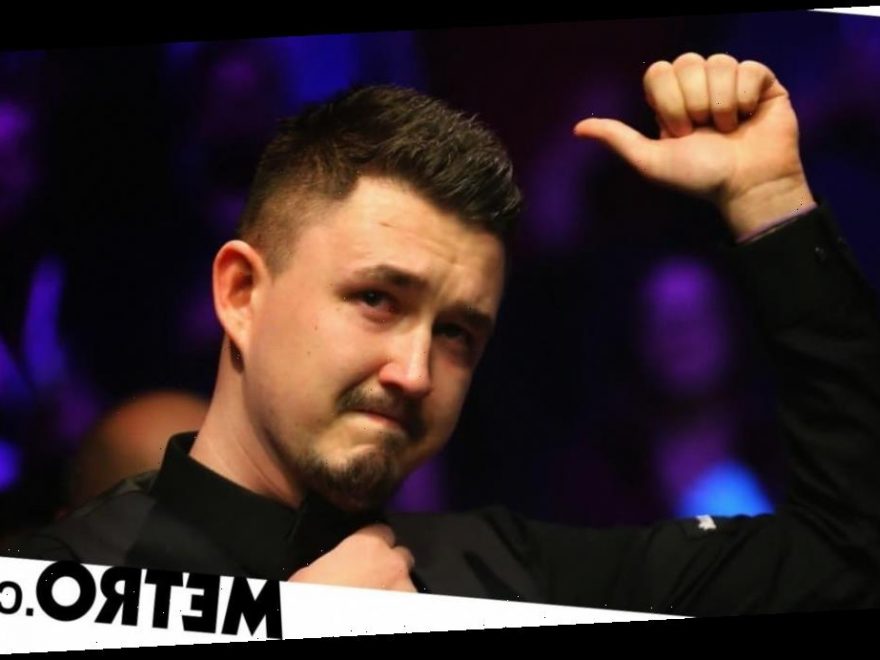 Kyren Wilson suffered the most emotional defeat of his career at the Masters, but he has learned from that painful loss and is heading to this year’s event set on lifting the trophy for the first time.

The Warrior has only played in the Masters four times, but reached the final on his second attempt in 2018, beating Barry Hawkins Mark Williams and Judd Trump to set-up a clash with Mark Allen for the trophy.

Allen got the better of him that day and Wilson memorably couldn’t hold back the tears after the 10-7 defeat, not afraid to show his emotion to the world.

The loss was tough enough to take on its own, but there was much more going on in Wilson’s head, all of which came together to produce the emotional scenes at Alexandra Palace.

Most notably that his manager, Brandon Parker, had become seriously ill at the time, an illness that would eventually lead to his tragic death last year at just 55-years-old.

‘There were a couple of reasons why I reacted like that,’ Wilson told Metro.co.uk.

‘I knew that my manager, Brandon Parker, wasn’t well at the time, we just discovered after the final that he’d been diagnosed with cancer. He was in London at the time seeking advice and treatment from some specialists. It would have been extra special to win that for him because he had a lot of involvement in the Masters himself.

‘I’d also always said to my mum that I’d win that trophy for her, because my mum and dad have dedicated a lot to my snooker. Re-mortgaged the house, stuff like that.

‘A weird event happened as well, where after the first session of the final, I needed to grab something to eat so me and my coach, Barry Stark, shot up to the high street and went in a Pizza Express.

‘It was full of the snooker fans, because it was the closest place, and everyone was willing me on and wishing me luck. I could really feel the energy and I think I took that into the evening session, that expectation, then I felt like I’d let myself and everyone down at the end. It all boiled to the surface at the end.’

It was clearly the worrying news of Brandon at the time that was the chief cause of the emotional scenes, though, and the major motivation for Kyren to win the tournament.

‘I’m one of those people, if I set my mind to it and have a bit of extra motivation…I wanted to do well because I knew how much it meant to him,’ said Wilson.

‘He managed Paul Hunter and he won three Masters titles, so it was a special tournament for him, it gave me a kick up the backside.’

That final was also memorable for Wilson saving a fan from being thrown out after a phone went off three times during the match.

The audience member was obviously grateful, but tech giants Google also took notice and got in touch with the Warrior afterwards as they wanted him to star in an advert.

‘It was actually the final that the mobile phone went off three times and I stopped the guy getting kicked out,’ explained Kyren.

‘It was mad the amount of people that remembered me for that rather than getting to the final.

‘It was crazy actually, a month after that we had Google on the phone wanting to do an advert about misusing mobile phones. The idea never happened in the end but we were in talks with them for a while in America, it was mad.

‘I think there were a couple of million views on that video straight away, it went pretty viral. I don’t know what it is with me, but I always have weird things going on, I just have some sort of energy that brings it to me.’

The Warrior does live up to his nickname, showing a superb fighting spirit and mental strength, to compliment his obvious talent with a cue.

He feels this has been part of him throughout his life thanks to difficult family circumstances they have faced.

‘I think it’s having to battle from a young age, it’s what’s been instilled into me,’ Kyren said. ‘My family has suffered with a lot of illness, my dad has MS, battling on with that all the time.

‘I’ve had it drilled into me that I just have to crack on with things. Especially with how the world is at the minute, it just makes you realise how important health and happiness is.

‘We’re lucky to be playing this game for a living. At times it drives me mad, but a lot of the time it makes me happy.’

Wilson has been incredibly consistent so far this season, reaching six quarter-finals out of eight events, while he also won the Championship League.

The 29-year-old is pleased with how solid he’s been, but always wants more as he looks to fill up his trophy cabinet.

‘After the end of 2020 I looked at it and thought, “I lost to the likes of [Mark] Selby, O’Sullivan and Judd Trump,” they’re the guys that are beating me.

‘I look at how I can improve and beat them next time, but I’m not doing too bad if it’s taking these guys on top form to beat me.

‘I’m probably my own worst critic and I’m annoyed I’ve not pushed on from them and I believe I’ve got a hell of a lot more to give.

‘But on the flipside, a year or two ago I was fed up of either getting to a final or bombing out first round, I wanted more consistency. I’ve managed to do that now and I think I’m one of the most consistent on tour, but not playing the best snooker on tour.

‘That’s exciting, though, because it just means there’s room for improvement there, even though I feel like I am doing well.

‘I’m looking forward to the Masters, it’s probably one of the most enjoyable to play in, but also the hardest to win.’

There has been a late change for Wilson in the first round in Milton Keynes, with Judd Trump and Jack Lisowski withdrawing from the Masters on the eve of the event due to positive coronavirus tests.

Kyren will take on Gary Wilson instead on Sunday evening, who comes in as a reserve.

Wilson will be hugely disappointed for Lisowski, having known Jackpot for nearly two decades and teaming with him for England at the 2019 World Cup.

‘My first memories of Jack would have been when we were 11 years old and he was floating round the table with his left hand back then,’ said Kyren.

‘We’ve grown up together, coming through the junior ranks, played for England together at junior and senior level.

‘I got to know Jack really well when we represented England together in 2019. He’s always a lad, if I’m not playing him, I look out and hope he’s doing well because he plays the game in a really good fashion and he’s just a nice lad. I wish him well, but obviously not when he’s playing me.’