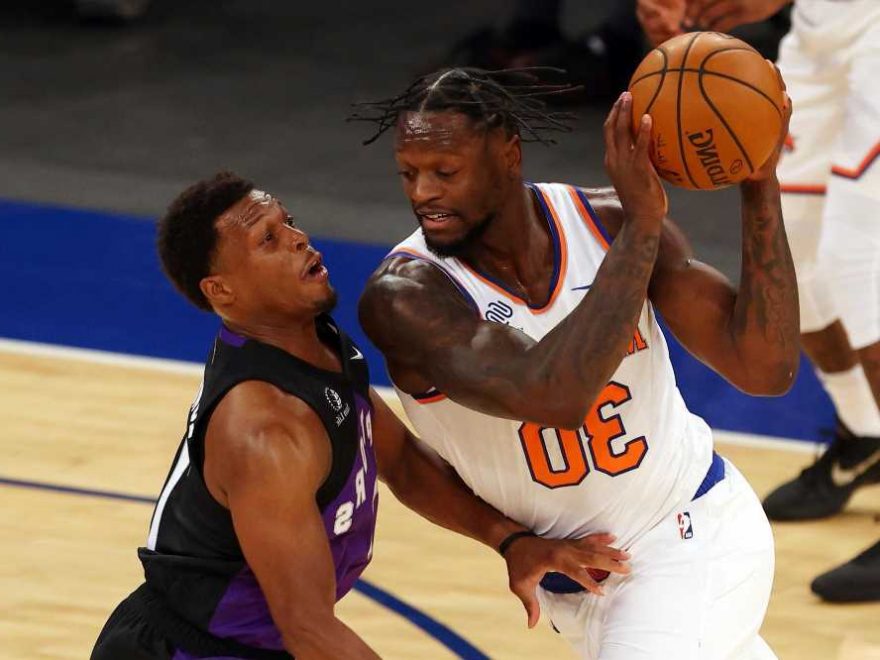 Knicks’ playoff push could hinge on this home stretch

The rain delay Sunday night at Madison Square Garden — yes, that’s right — would have been far more costly for the Knicks than the one the Mets dealt with earlier in the day.

While the Knicks were in the process of flushing an 18-point lead in the second half, the game was delayed for 14 minutes due to water falling from the ceiling onto the court.

The eighth-place Knicks’ first win in 10 games against the Raptors since November 2017 was a significant one for them in the Eastern Conference standings, increasing their cushion over No. 11 Toronto to six games with 18 remaining. The top six teams in each conference automatically qualify for postseason play, with teams seven through 10 subjected to play-in scenarios.

Randle netted a team-high 26 points and Barrett scored 19 for the Knicks (27-27), who have won consecutive games after dropping five of their previous six. They will play again Monday at home against the Lakers, who remain without injured stars LeBron James and Anthony Davis.

The Knicks had built a 68-50 lead early in the third quarter, but the Raptors stormed back with a 37-15 surge to grab an 87-83 advantage on Rodney Hood’s 3-pointer with seven minutes remaining in the fourth.

The Knicks netted the next nine points to regain the lead, including a drive by Barrett and a straightaway 3-pointer by Alec Burks for a 92-87 lead with 3:24 remaining. Barrett’s right-corner 3 in the final minute extended a one-point cushion to four, and after Pascal Siakam was called for traveling with a chance to tie the score, Randle sank four straight free throws in the final 10 seconds to seal the win.

The Raptors were without Fred VanVleet (hip) and OG Anunoby (rest), but they’d scored 135 points without them — and with Lowry and Siakam also sidelined — in Saturday’s win over Cleveland.

“They’ve had a number of injuries, but it’s a deep and talented team. They put up 87 points in the first half of their game [Friday] night, and they had a number of their players out for that particular game. So you have to be ready for them,” Thibodeau said. “They can turn you over and they get in the open floor and they are very dangerous.”

Stifling defense by the Knicks held the Raptors to just 13-for-42 shooting (29.3 percent) in the first half, beginning with Bullock’s interception of a Siakam pass on Toronto’s first possession for a breakaway dunk. The Knicks clanked 10 of 12 3-point attempts in the first quarter, but Randle’s three-point conversion in the closing seconds gave them a 27-16 advantage.

Derrick Rose (11 points) was hacked on a 3-point attempt and knocked down all three foul shots for a 14-point cushion early in the second. Randle, who finished with 18 points in the half, sank two free throws with 13.4 seconds remaining as the Knicks carried a 56-42 lead into intermission.

Barrett and Reggie Bullock (10 points) connected from downtown early in the third to extend the Knicks’ advantage to 18. Siakim and Trent combined for 14 in a 16-4 Toronto run to slash the lead back to six, 72-66, with five minutes remaining in the quarter.

The game was delayed for 14 minutes beginning at the 3:58 mark of the third quarter, with the Knicks leading by 10, due to what the team called “a small drip from the rain,” coming from the ceiling. After the delay, the Raptors closed to within two points, 78-76, by the end of the quarter on 3-pointers by Trent and Chris Boucher.