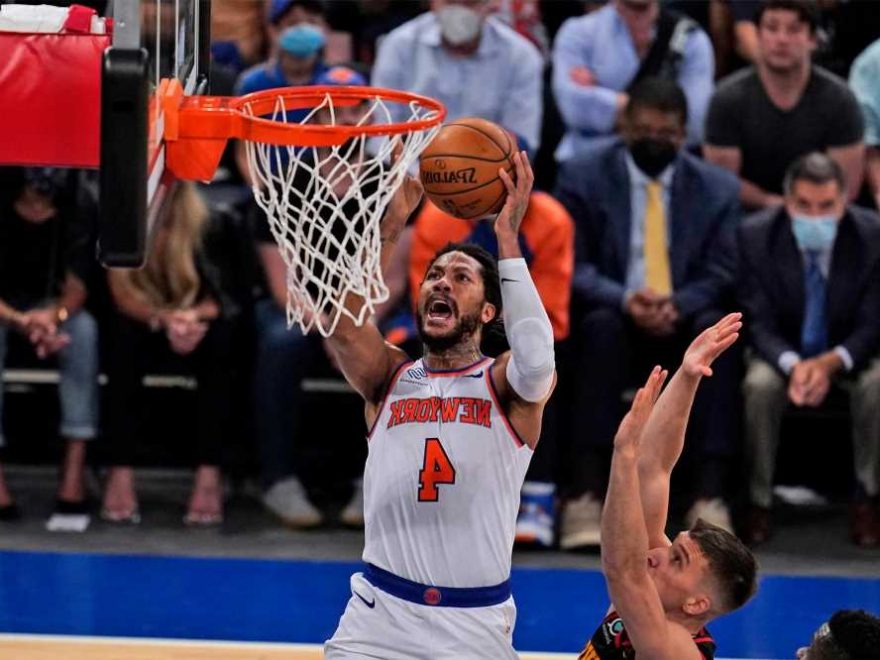 Tom Thibodeau needs to be better

They got everything they could have expected from Derrick Rose in the playoff opener, precisely what he has given them all season, and that has to be comforting for the Knicks. The problem is, they might need even more.

On a night when Julius Randle was bad, Reggie Bullock was worse and RJ Barrett was ordinary, Rose was the second-best player on the court for the Knicks in their 107-105 Game 1 loss to the Hawks on Sunday. Alec Burks came off the bench to pump in 27 points and, without him, there would not have been a need for Trae Young heroics in the closing moments. Rose was right there, as well and as usual, with an ultra-solid 17 points. He had trouble staying in front of Young — who doesn’t? — but he was a calming presence and a heavy contributor on a team filled with players lacking in postseason résumés.

“I’ve been around him a long time, so he has a lot of playoff experience,” Knicks coach Tom Thibodeau said Tuesday after practice. “He has a lot of overall experience, he’s been through a lot of different situations. He’s overcome a lot of adversity. So I think along with that comes great wisdom. I think the players appreciate his leadership. He’s team first, and he’s willing to sacrifice and always puts the team first. He’s great for his teammates. He plays for his teammates.”

Rose averaged 26.8 minutes per game in the regular season, but Thibodeau rode the 32-year-old as long as he could, inserting him into the game just 4:15 into the first quarter, replacing struggling starting point guard Elfrid Payton — possibly as soon as Wednesday night an erstwhile starting point guard. Rose barely took a seat after that, staying on the floor for 38 minutes. He made 8 of 16 shots and had five assists but also committed five turnovers, with the heavy workload perhaps taking a toll.

Still, Rose did score on a floater with 9.8 seconds remaining that pulled the Knicks even at 105 to nearly bring the Garden house down. Young then silenced the crowd.

“The first thing I saw in Game 1 is he’s being his normal self,” said Taj Gibson, a teammate of Rose with the Bulls and Timberwolves before teaming up again with the Knicks. “He plays strong, being a strong leader, being a point guard, being vocal. He’s been playing well. Our young guys are coming in playing extremely well, too. We had some good energy. I think Derrick is going to be special coming down the stretch.”

Rose in a comeback season finished third in the voting for the NBA Sixth Man of the Year award. Jordan Clarkson of the Jazz received 65 (out of 100) first-place votes and teammate Joe Ingles was second with 34 votes. Rose received the other first-place vote.

“He’s basically the guard that is finishing for them,” Hawks interim coach Nate McMillan said. “He’s coming off the bench but he plays a big part in that second unit and how they attack you.”

It remains to be seen how much more Thibodeau can ask from Rose. It might depend on how the kids respond.

The 20-year-old Barrett, playing in his first playoff game, when asked if there was some overexcitement from the younger Knicks early in the game, admitted, “Maybe a little bit.’’

“Definitely I think we’re settled in now and we’ll be fine,” Barrett said.

The Knicks cannot afford to get swept in their first two home games in this best-of-seven series. Rose has done plenty to get them this far, but more might be required.