Sharks coach John Morris says his depleted side's comeback win over Brisbane is one of the bravest performances he's been involved with at the club.

Cronulla looked down and out before a flurry of late points, headlined by a game-changing piece of brilliance from Ronaldo Mulitalo, delivered the injury-riddled Sharks a memorable victory over a Broncos side that looked as if they had finally regained form on the back of a vintage effort from Darius Boyd. 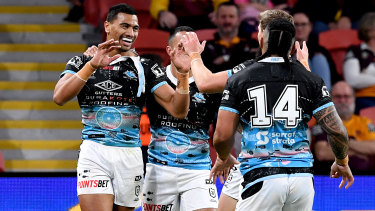 Ronaldo Mulitalo and his Sharks teammates celebrate during the win over the Broncos.Credit:Getty

Brisbane had been attacking the Sharks line and looked like scoring again before Dearden, under pressure from Graham, fumbled a short drop out near the 70 minute mark. A set later the Sharks were in at the other end, Brisbane didn't touch the ball again and the procession began.

This was a heartbreaker for Brisbane and especially Boyd, who played at fullback for the first time since round 16 last year. He tackled himself to a standstill and fired off four try assists. He was playing like it was 2010 but when the pressure was on late, Brisbane's defence fell apart.

Kotoni Staggs was strong and scored a double, while Payne Haas and captain Pat Carrigan worked tirelessly through the middle. In the end, it was to no avail and they remain a club in the midst of a deep depression.

Coach Anthony Seibold was as frustrated as he has been at any point of the season. All the improvement, of which there has been some over the past fortnight, matters little if they continue to lose.

But he remained defiant, saying he would not be walking away and would coach the club until told otherwise.

"I believe so. I certainly won’t be quitting. I don’t think quitting is an example this young group needs to see or wants to see. We’ve taken some big steps forward in the past two weeks but ultimately we lost both games and conceded a lot of points," Seibold said.

"Everyone can see tonight was a bit better performance. I won’t be quitting, that’s for sure."

Brisbane looked as if they would take a 14-12 half-time lead but it was debutant Jackson Ferris, who minutes earlier had been put on report for a shoulder charge on Herbie Farnworth, who finished off a classy move to give his side an 18-14 lead at the break.

Brisbane found some defensive spine at last at the start of the second half, defending four sets on their line before Boyd orchestrated the try at the other end to nudge the Broncos ahead 20-18. Soon after, he would chalk up try assist number four to give Staggs a deserved second.

Brisbane threatened to extend their lead until Dearden's spill. Katoa would then score in the opposite corner and Shaun Johnson's clutch sideline conversion had Cronulla trailing by two with eight minutes remaining.

Then Mulitalo would deliver a piece of magic with his pinpoint kick to give the Sharks a sniff, before Braden Hamlin-Uele finished off strongly to lift the Sharks from the canvas once and for all.

Cronulla move to fifth on the ladder but the impressive Jackson Ferris left the field late in the piece with a knee injury, with no update available immediately after the match.

Sports news, results and expert commentary delivered straight to your inbox each weekday. Sign up here.