Koroisau is back in NSW camp for the first time since being slugged with a two-game ban and $50,000 in combined NRL and NSWRL fines for bringing a woman into the Blues’ team hotel the night before Origin II last season.

The 29-year-old made his NSW debut in the following game, with his breach of strict Covid-19 protocols only revealed after the series.

At the time, Blues figures painted a bleak picture for the chances of Koroisau ever appearing in sky blue again, with a NSWRL statement declaring the board “will need to be convinced he has earned the right to be once again trusted to uphold all of the standards, protocols and values of NSWRL.”

But coach Brad Fittler told The Herald on Monday that Koroisau has proved himself both privately and publicly, not least in putting the off-field drama aside to help lead Penrith’s premiership charge and impressive start to 2022.

“It was cleared up last year,” Fittler said. “He’s paid a big price for that one. State of Origin is still about what you do on the field. We do push a hard line I think with their behaviour, because we represent so many people. It’s about being a role model. 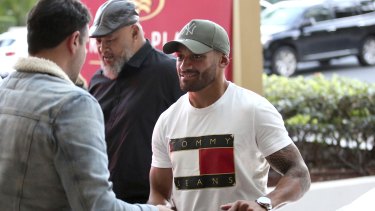 Api Koroisau returned to NSW camp for the first time since his bubble breach last year.Credit:Nine

“I think Api’s shown that in how he went back out there, he hasn’t been distracted, he’s won a grand final and been [Penrith’s] best player every week. It’s hard to ask for much more from a coaching point of view.”

Koroisau himself thought his Origin tally would never move beyond the 22 minutes he played off the bench in last year’s dead rubber, given the NSWRL’s reaction.

He said he and Fittler had already discussed the matter since entering camp on Sunday, with Koroisau to act as Damien Cook’s understudy throughout the week before a planned club return for Penrith’s Friday night clash with Canterbury.

“We’ve addressed it here already. It’s just one of those things where Freddy’s shown faith in me to bring me back in. He’s asked me to do a job and I’m just grateful for the opportunity and I’ll be doing it for him.”

NSWRL chief Dave Trodden backed Fittler and selector Greg Alexander’s judgement on Koroisau’s return, with the latter’s feedback as a Panthers board member putting the state governing body at ease.

“From the board’s point of view, Api accepted his punishment last year without complaint and he exhibited a significant amount of contrition,” Trodden said.

“Freddy and Brad are closest to those issues, and they’re employed to make recommendations on them. We’re well and truly prepared to back their judgement on it.”

Stream the NRL Premiership 2022 live and free on 9Now.