Tokyo: Seven-time world champion Stephanie Gilmore is out of the hunt for an Olympic surfing medal with a shock loss to South African Bianca Buitendag.

The Australian star took to the water in the opening heat of round three on Monday at Tsurigasaki beach and got off to a promising start.

She crashed out of the women’s competition, losing to rank outsider Bianca Buitendag of South Africa in their last 16 heat early on Monday morning. 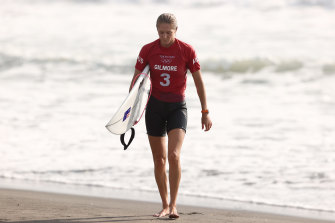 A deflated Stephanie Gilmore exits the surf after losing her heat and being eliminated from competition. Credit:Getty Images

Though the waves were bigger and more powerful than those on offer during Sunday’s opening session, choosing which one to ride proved difficult and Gilmore, who posted the best scores on the opening day, came up short in her selections as Buitendag swept to victory.

Judged on the combined scores from their two best waves, surfers in head-to-head heats are given priority when choosing which ones to ride.

When Gilmore passed up her chance on a promising wave Buitendag grabbed the opportunity, using it to post a score of 7.10 that proved pivotal.

“I looked at that wave and I was like, it doesn’t look that good, so I let her have it and she turned it into a seven, so that was the most frustrating thing to me – like, man, I should have just taken that wave,” Gilmore, 33, explained.

Few expected Buitendag to have any chance at all against the decorated Australian, but the lack of expectations allowed her to perform at her best as she won by a score of 13.93 to 10.00.

“It was very hard (to pick the right waves), but I knew I was up against Steph, who is the best women’s surfer in the world so I knew I had to be on the best waves, otherwise I stood no chance.”

Knowing that Gilmore could pull out a winning run at any time, the closing stages of the half-hour heat were tough for Buitendag.

“It’s nerve-wracking. I know she can get a 10 [score] at any given moment, so that was probably the longest three minutes of my life!” Buitendag said.

With bigger swells in the ocean and higher onshore winds, local Olympic volunteers had to remove some parasols and tents to stop them blowing away.

The competition continues with 32 athletes in total taking part in Monday’s knockout competition. 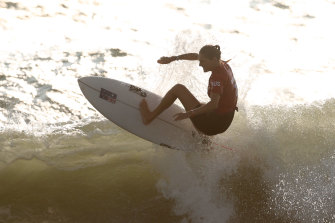 But 27-year-old Buitendag, who no longer competes on the World Surf League, nailed two consecutive wave scores of 6.83 and then 7.10 to storm past Gilmore.

That left Gilmore needing 7.76 to regain the lead and while she had 14 minutes up her sleeve, couldn’t find the winning waves with the final margin 13.93 to 10.0.

Gilmore was in great touch in her opening heat, posting the highest score of the women’s competition, but couldn’t replicate that form a day later.

After the heat she said she felt great: “Really fired up. I was kind of anxious to get started because it’s been over a year longer than we expected to be here in Japan. So, I feel like the energy has been building.”

Buitendag was ranked as high as world No.4 in 2014 but hasn’t had full-time status since 2016 and secured Olympic qualification through the 2019 ISA World Surfing Games.

“I was 12 years old when I watched Cathy Freeman win the gold medal,” Gilmore said before the competition began.

“I thought she was like a real-life superhero. So I thought, ‘Oh, man, I want to do that’. I always had a dream of going to the Olympics, but I thought it was gonna be like javelin or discus, or something.”