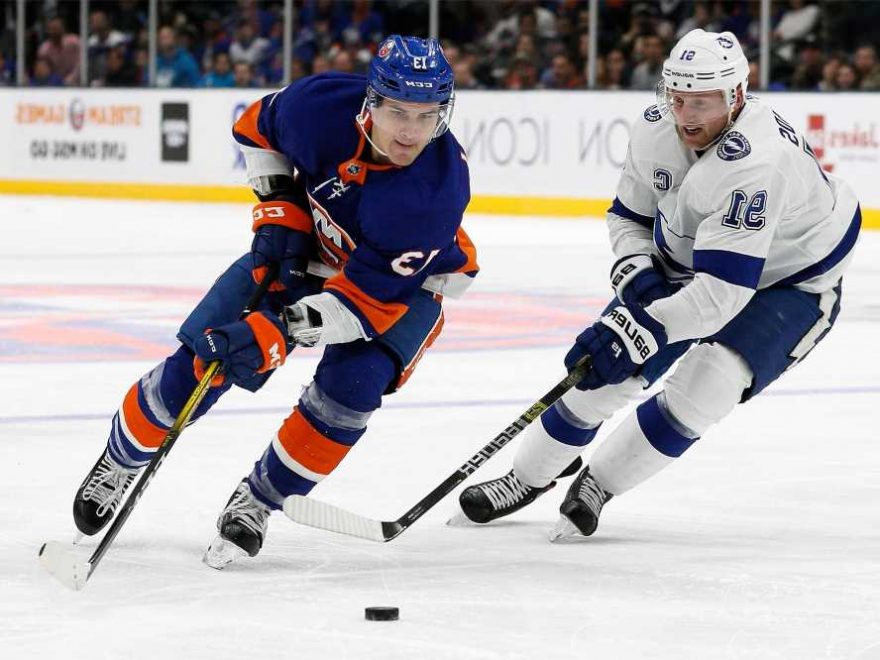 Where Islanders get confidence from in Lightning rematch

Defenseman’s solid playoffs could spell end of his Islanders tenure

The Islanders and Lightning meet again, this time during another season unlike any other. Their Stanley Cup semifinals series, which begins Sunday in Tampa, Fla., will be a rematch of the playoff battle in the Edmonton bubble last September, in which the Lightning defeated the Islanders in six games on the way to their first Stanley Cup title in 16 years. Head coach Barry Trotz memorably said at the start of this season that he’d have visions of that loss to Tampa Bay on his deathbed, but now he and the Islanders have earned an opportunity to rewrite the script.

“I think we feel like we still have some unfinished business,” Josh Bailey said stoically after the Islanders’ series-clinching win over the Bruins in Game 6 Wednesday night.

Let’s not forget, the Lightning soundly defeated the Bruins in five games in Round 2 last postseason, which gave them ample time to rest up as the Islanders were forced into a Game 7 by the Flyers. The Isles had just one day in between Game 7 against Philadelphia and Game 1 against the Lightning to travel to Edmonton.

If we’re piling on the excuses, fourth-line center Casey Cizikas at the time was ruled out for the remainder of the postseason after Game 2 due to a detached retina. They also were without top-pair defenseman Adam Pelech, who played through a broken wrist in the Isles’ overtime win in Game 5, in their season-ending Game 6 loss.

This time around, the Islanders are bringing reinforcements. Trade deadline acquisition Travis Zajac has already had to fill in for rookie sharpshooter Oliver Wahlstrom. Barring any major injuries, depth shouldn’t be a deciding factor for the Islanders.

The Post’s Mollie Walker takes a look at how the teams matchup.

Trotz may feel that Semyon Varlamov was snubbed by not being a finalist for the Vezina Trophy, but he acknowledged that the three finalists were more than deserving of the top goalie award. And one of those three was the Lightning’s Andrei Vasilevskiy.

Vasilevskiy was remarkable during the regular season, proving to be one of the Lightning’s most valuable players as he faced an average of nearly 30 shots a game. He led the NHL in wins (31) and garnered a .925 save percentage in 42 starts out of 56 games.

This postseason, Vasilevskiy is leading the league in saves (352), has allowed the second-fewest goals (25) and has posted a 2.24 goals-against average.

The Islanders are the first team to have one goalie record all four wins in one series and another record all four wins in the next since the Canadiens did it in 1987 with Patrick Roy and Brian Hayward. Though Varlamov has seemingly rebounded from his shaky performances in Games 2 and 3 of the first-round series against the Penguins, which prompted Trotz to turn to rookie Ilya Sorokin, Varmalov allowed a few questionable goals to the Bruins.

The Islanders averaged the second-fewest goals against per game with 2.23 during the regular season, while the Lighting weren’t too far behind with 2.59. Compared to the rest of the Islanders’ opponents this postseason, the Lightning should have the most equally defensively savvy squad.

Victor Hedman, Tampa Bay’s No. 1 defenseman, is a Norris Trophy finalist and has been one of the top defenders in the league in recent seasons. Further down the left-hand side is former Rangers captain Ryan McDonagh, who plays a good chunk of minutes, similar to Hedman.

The Islanders’ D contributes far more on offense than the Lightning’s defense does. Plus, the Islanders’ top defensive pair of Adam Pelech and Ryan Pulock have survived two of the best top lines in the NHL from the Penguins and Bruins. They’ve been skating against elite scorers all postseason and have continuously risen to the occasion.

Defense is the Islanders’ bread-and-butter, and that shouldn’t change this upcoming series.

Similar to the Islanders, the Lightning are a well-balanced four-line team. Tampa Bay, however, undoubtedly brings more star power, with a scoring threat on each line. The Lightning have Nikita Kucherov, Alex Killorn, Yanni Gourde and Pat Maroon — and also Brayden Point, Steven Stamkos and Blake Coleman.

The Islanders’ Mathew Barzal has just started finding the back of the net, while players like Brock Nelson, Kyle Palmieri and Josh Bailey continue to do so. After facing the high-scoring Penguins and Bruins, the Islanders will likely need even more to outscore the Lightning.

While the Islanders’ power play got hot during their second-round series against the Bruins, their usually top-notch penalty kill was picked apart by Boston. They gave up seven power-play goals to the Bruins. And if Boston was a lofty task, the Lightning will be an even more difficult challenge.

The Lightning has scored on 15 of their 36 man-advantage opportunities this postseason, which amounts to a league-leading 41.7 percentage. They average 3.27 power-plays per game, which is also the best in the NHL among teams that are still active.

Jon Cooper may be the reigning Stanley Cup-winning head coach, but Barry Trotz also knows what it takes to win a championship series. He did it with the Capitals just three years ago.

Trotz has made sure the Islanders have kept their eyes on the prize this entire postseason, while also encouraging them to enjoy each victory. His demeanor is something the players look to, and his determination is contagious.

The Islanders have waited all season to take that next step from the point at which their playoff run ended last year, and it’s pretty poetic that they’ll get a chance to do it against the Lightning.

But Tampa Bay is a loaded team with star power that rivals both squads the Islanders had to defeat to get back to this point. It will take a top-tier effort every game for the Islanders to combat the Lightning.