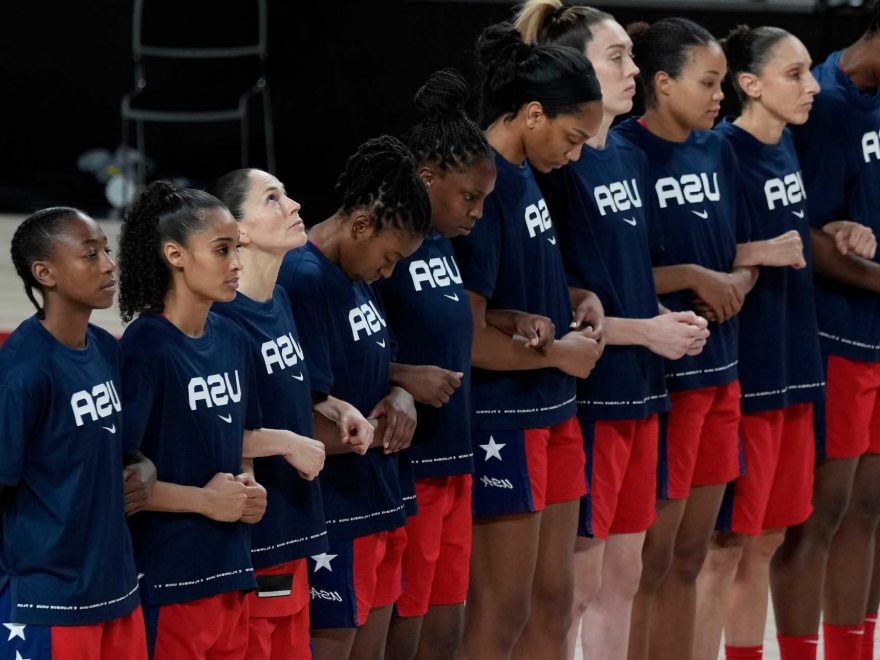 NFL's 'black' and 'white' anthems will only promote divisiveness

MLB finally gets one right

I would be remiss if I didn’t begin, today, by expressing the nation’s gratitude to the women’s U.S. Olympic basketball team for its generous decision to pretend it doesn’t mind representing the United States during the playing of our national anthem.

That’s right, the team, composed of WNBA professionals who during their season assiduously avoided being on or near the court during the anthem to protest whatever personal or political gripes they have with the United States and their citizenship, decided to take these Games off.

At least for now they have declared, through captain Sue Bird, that they will cut us all a break to appear as if they’re minimally willing to gather on the court to represent the United States on a world stage during the anthem (even if standing while looking down, away from the American flag), in defiance of their conviction that America is unworthy of them.

For that, we should be grateful. After all, most of us have never walked in their slave-wage-made, swoosh-conspicuous Nikes and clothing ensembles, products of Red China, which incarcerates those who advocate democracy, including free speech and the right to protest, at the risk of disappearing.

It’s tough for me to identify with their woke activism, given that I didn’t have the opportunity to play ball in exchange for a free college education. Heck, for 10 years I had to pay off my college loan in monthly mailings to make good on my educational debt. Money once earned, well spent.

It must be hard for many of us to appreciate all they’ve been through. Still, they’ll now fabricate token pride in representing America in Tokyo. What heroic sacrifice!

They’re gracious enough to announce that they’re going to do us all a favor. They’re not going to remind an international audience that the U.S. is a rotten country.

The men’s Olympic basketball team, one NBC and its affiliated networks remind us to unconditionally back as a matter of patriotic obligation, is another tough ask.

This was predetermined with the naming as head coach of U.S. Air Force veteran Gregg Popovich, a needlessly nasty, know-it-all recalcitrant whose divisive, intemperate views of America as systemically racist are so selective as to be, at best, half-blind, as its head coach.

We couldn’t come up with an Olympic coach who actually takes pride in being an American?

The women’s Olympic soccer team, as a solidified group — no dissidents heard, seen and perhaps allowed — remains inextricably attached to its knee-takings during our anthem. We’re told such largest-stage anti-American protests now include pro-capitalist demonstrations in that they’re partially designed to advocate pay equal to that of the men’s national soccer team.

But how does that explain or excuse the team’s obnoxious, even vulgar behavior, including the taunting of opponents and their fans, and gleefully running up the score — behaving like bullies — in mismatches, as seen throughout the last women’s World Cup?

Who among them was denied a full college scholarship to play soccer? Who among them had to sweat tuition, room, board, clothing, a loan?

Not even one member of the contingent prefers to stand for our anthem? Or did she have to capitulate to mob rule?

There’s nothing like seeing athletes covered in Nike swooshes and clothing complaining that America is no damned good.

Now, as the national team’s popularity plummets by its own repugnant devices, they demand more money? Brilliant strategy.

Where NBC once exploited its exclusive Olympic rights to push its other goods, including its obedient news anchors, these Olympics have additionally been exploited to sell NBC’s new Peacock streaming network. Thus, some larger-attraction events in which the U.S. was expected to succeed can be seen live only if one pays the peacock.

As for the Simone Biles saga and the pressure she could no longer withstand, NBC’s “Today” show co-host Hoda Kotb said, “There are only a couple of athletes to know what it feels like to be on the front page of every paper, every magazine, in every commercial, in every ad, the world watching you. You are defining the Olympic Games.”

She forgot something. No media entity was a greater offender, and over the longest time, in placing such pressure on Biles than NBC, including “Today,” which relentlessly shills for every Olympics it buys.

It was NBC that recklessly sold Simone Biles, especially to female viewers, as the greatest of American hopes, ignoring her past mental fragility to present her as the face and form of these Olympics, a lock to win both more gold and renew her hold on our hearts.

As reader John Genchur put it, judging from watching NBC, even before these Games began, “I was completely surprised to learn there were other members of Team USA besides Simone Biles.”

Then, NBC reported that the pressure was too great. After all, she’s only human. Imagine that.

Ignoring obvious on the diamond

Sometimes, as in a lot of times, I figure that those who know better say the opposite — or just take a pass — hoping we don’t know any better.

In the first inning of the Yankees-Boston game Saturday on YES, Brett Gardner, a left-handed hitter batting .193, on a 1-2 count hit a 98 mph pitch to the third-base side, beating it out for a hit away from the shift.

Paul O’Neill explained why: “Brett Gardner still runs well and Nathan Eovaldi throws hard. So what do you do? You slap it the other way.”

No chance that Gardner merely swung late at a 98 mph pitch, happy to make 1-2 pitch contact? If he could do as O’Neill said he just did, why was he hitting .193? Why does he so often strike out or ground out trying to pull the ball deep, thus into the shift?

Sunday, he mocked the “quality start” stat — six innings, no more than three earned runs — as “laughable.” Agreed. That’s a 4.50 ERA “quality start,” the kind of stat that could only be the offspring of analytics.

Yet, moments later, Cone recited a list of analytic pitching stats (kinds of pitches thrown, how often and how successful) that ignored dozens of significant pitcher versus batter and game circumstances — as if that data held genuine, applicable enlightenment.

Then there are the Mets’ radio and TV announcers, Gary Cohen, Howie Rose, Wayne Randazzo, Ron Darling and Keith Hernandez, who watch “Humble Pete” Alonso excessively celebrate himself (on Sunday, home plate through the dugout, he couldn’t get over himself) after hitting home runs.

Unless all five approve of such unbridled public immodesty, all are stuck with pretending to love what they logically don’t. Would any teach the kids in their lives to play that way? If not, why not?

That brings us to reader Len Geller, who asks if Alonso prefers to watch “CNFN or MSFNBC.”