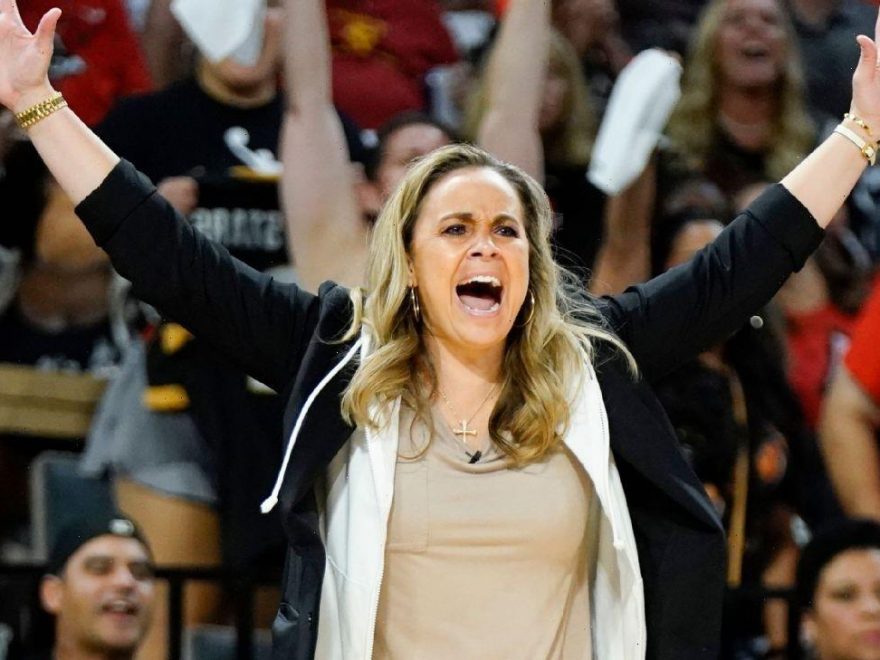 LAS VEGAS — Generally, Las Vegas Aces coach Becky Hammon is not a screamer. She will get her point across, for sure, but if she can do it in the measured, even vocal tones she’s known for, that’s what she prefers.

But sometimes circumstances — in this case Game 1 of the best-of-five WNBA Finals — call for a different approach. The Aces won a Finals game for the first time in franchise history, topping the Connecticut Sun 67-64 here Sunday, and they did it with a second half fueled by a halftime torching from their coach.

“Oh, I was lit,” Hammon said of her talk in the locker room with the No. 1 seed Aces. “Because everything we had talked about, we didn’t do any of it. And true to form, they just step up and do it then.

“I don’t even yell in my real life. But when you feel so strongly about how you have to play a certain way … and you don’t execute it, it’s frustrating. But at the end of the day, they know it. They are smart. They get it.”

The Aces got another dynamic-duo performance from season MVP A’ja Wilson and Chelsea Gray, who has made a case thus far as the top WNBA player in the postseason. Wilson had 24 points, 11 rebounds and four blocked shots, while Gray had 21 points and three assists.

Gray also drew a late charge; her offense isn’t the only thing that has stolen the show in the WNBA playoffs. Hammon called it the play of the afternoon.

Gray and Wilson were asked to paraphrase what Hammon said to them at halftime, but both declined.

“We have children watching,” Gray joked, and Wilson added, “You mean you didn’t hear?”

“She was just on us to play our style defensively,” Gray continued. “We were letting them get offensive rebounds, easy scores, turning over the ball. That’s the edited version. I can’t give you everything.”

Hammon summed it up like this: The Aces were not winning the points in the paint and rebounding battles, nor making the hustle points, nor making it tough for the Sun to get transition and second-chance points.

“You can go down the list — we didn’t do any of them,” Hammon said. “Until the second half.”

Credit also goes to Connecticut, the No. 3 seed that knocked out defending champion Chicago in a five-game semifinals series. The Sun have the 2021 MVP in Jonquel Jones, along with one of the most relentless players in the league in Alyssa Thomas. Both are strong, determined forwards.

“Messy” has become the buzzword around the Sun this WNBA postseason because of their ability to take other teams away from what they do best, using their physicality to help do that. But the Sun aren’t some version of the Philadelphia Flyers’ Broad Street Bullies of the 1970s, who used rough play to overcome talent deficits against other teams. The Sun have plenty of their own talent. But in facing two very good offenses back-to-back in the Sky and the Aces, Connecticut has been hoping to wear them down with physicality.

For the most part, it worked last series against Chicago. But no one has really been able to wear out the Aces yet this season, even though they’re not a deep team.

That said, the Sun players didn’t seem disappointed with how they played Sunday, short of not getting the win.

“I mean, after this game, we have to have a lot of confidence,” said Thomas, who led the Sun with 19 points, 11 rebounds and five assists. “This is a three-point game, and we had a chance to tie.

“There are some things we can clean up. Of course, we can make more shots, but overall we played a hard game.”

Both teams had star players who struggled from the field in shooting 1-of-9, so they kind of canceled each other out. The Sun’s DeWanna Bonner had three points, while the Aces’ Kelsey Plum had six. Bonner’s last miss came on her effort to tie the game in the closing seconds.

“It was an ugly game,” Plum said. “As a competitor, I want to help my team win, and that’s one of the ways I’ve done it all season. So I just know it’s going to turn, so I’ve got to stay with it.”

Hammon, though, pointed out that even an offensively uncharacteristic Plum was still a contributor in other ways. And Aces forward Dearica Hamby, who started most of this season before being sidelined by a knee injury in August, has been working her way back and had an impact Sunday in her nearly 11 minutes on court for Las Vegas.

“I thought Plum’s defense down the stretch really sparked us — she played hard,” Hammon said. “Her shot wasn’t falling and she found other ways to impact the game. At the end of the day, that’s what you have to have, that kind of mentality.

“Dearica, same thing. Didn’t get a sniff in the first half and comes out and completely changes the aspect of the game [in the second half]. That’s a pro, first of all, but just being ready to go. Her mentality is more of a physical [play] mentality. That’s what we needed, so that’s what we told them.”