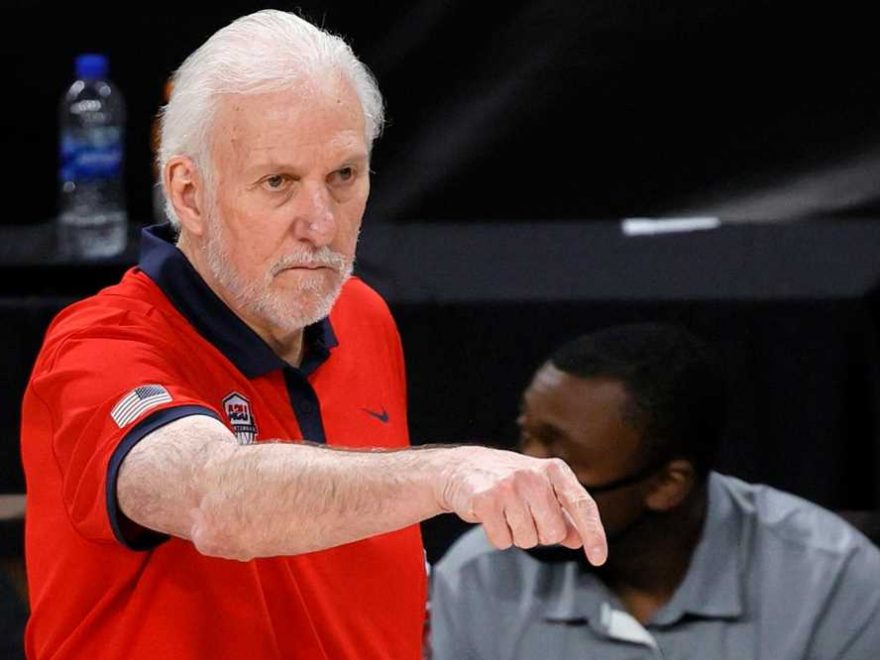 Surfers in Tokyo eye typhoon forecast — but say bring it on

Once upon a time, Gregg Popovich was angry that he lost the head coaching job for the 2008 Beijing Olympics to Mike Krzyzewski, and angrier over the way Team USA’s overlord, Jerry Colangelo, portrayed his failed candidacy in the media.

“I said I just didn’t feel it from Pop, and he took it personally,” Colangelo explained. “So our relationship widened even further.”

Popovich later made it clear to friends he wasn’t happy that Coach K re-upped for the 2012 Games in London, and again for 2016 in Rio de Janeiro, forcing the Spurs head coach, a five-time NBA champ, to wait three Olympic cycles for his big break. “I didn’t know this was going to be a lifetime appointment,” Popovich complained to one friend.

In the end, after Colangelo and his Beijing runner-up reached something of a peace accord, Popovich was finally awarded the job of bringing home the gold.

An Air Force Academy graduate who became an all-time NBA coaching great, Popovich absolutely deserved the nod. But now, of course, comes the hard part. As the Tokyo Olympics get underway in Japan, where the majority of citizens oppose the staging of the Summer Games amid a rising number of COVID-19 cases, nobody outside of the IOC is facing more pressure than the head coach of the United States men’s basketball team.

For starters, as much as Popovich believed Krzyzewski should’ve been a one-and-done, like most Olympic coaches before him (Pop wasn’t the only major American basketball figure who felt that way), Coach K went 3-for 3-in gold-medal pursuits, though he did benefit by having LeBron James and Kobe Bryant in Beijing and London.

He is the head coach of the 2021 U.S. team that lost an exhibition game to Nigeria, a nearly 30-point underdog, and another to Australia, before making the trip to Japan, where the Americans will open play Sunday morning in Saitama Prefecture, north of Tokyo, against a strong French team.

Yes, the world has been closing the basketball gap on the U.S. since the 1992 Dream Team helped spread the game’s gospel around the globe. And yes, Popovich has some pretty damn good excuses available to him in the event he needs to lean on them over the next couple of weeks.

For one, James, Anthony Davis, Kawhi Leonard, Stephen Curry, James Harden and Kyrie Irving are among those not playing. For two, the pandemic pushed the NBA postseason into the third week of July, costing Popovich the kind of valuable pre-tournament time with players that Krzyzewski used to develop winning chemistry. (Jrue Holiday, Khris Middleton and Devin Booker just finished the NBA Finals on Tuesday.)

But there isn’t a head coach in the Olympic field who wouldn’t trade his roster for Popovich’s right now, with or without the practice reps. Popovich had Kevin Durant, Damian Lillard and Jayson Tatum for the recent exhibition losses. If those three could ever form a super team, it would be immediately favored to win an NBA title, not to mention Olympic gold.

Popovich can play the tough guy when asked about his team’s performance, or lack thereof, at a press conference, but he can’t escape the fact the Americans should win this tournament despite the obstacles in their way. He also can’t escape the potential consequences of defeat.

Krzyzewski was so devastated when he lost to Greece in the semis of the 2006 world championships (it wasn’t even the Olympics), he wanted to end his career on the spot. In his recent retirement press conference at Duke, Krzyzewski called that moment “the worst day of my life in coaching.” He never lost another game as Team USA’s coach.

At 72, Popovich might get only one crack at this. He can go down as another Larry Brown, the only coach to lose an Olympic tournament with NBA players. Or he can join Krzyzewski, Rudy Tomjanovich, Lenny Wilkens and Chuck Daly as leaders who figured out a way to get their professional stars to the house.

France has its own cast of NBA players, and enough talent to provide an opening test that won’t be the last the U.S. faces. Popovich more than earned the right to confront this challenge, but his risk-reward ratio is alarming.

In case you’re keeping score at home, no American in Japan has more to lose than Gregg Popovich does.