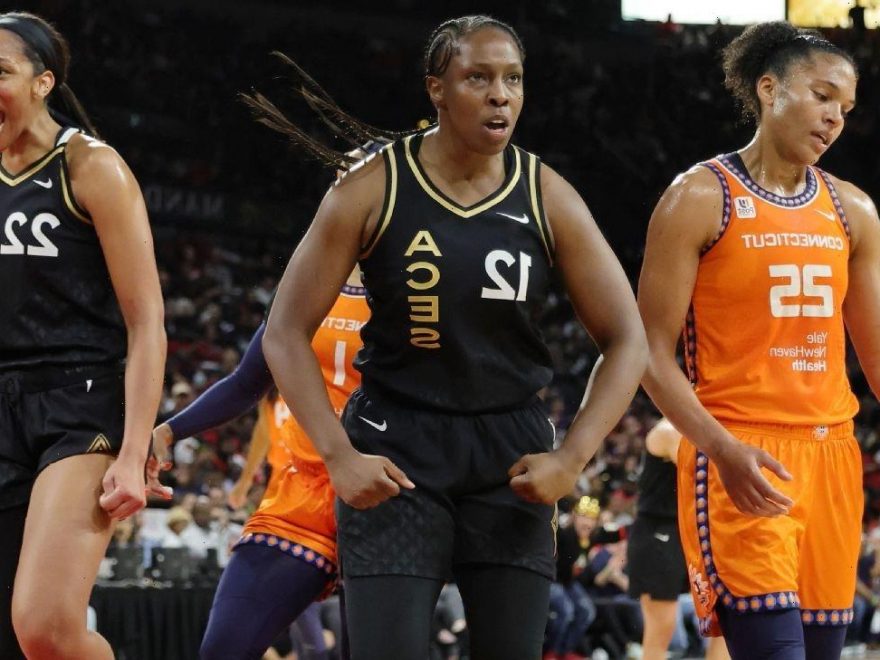 LAS VEGAS — How on fire has Chelsea Gray been during the 2022 WNBA playoffs? Teammate A’ja Wilson is the league’s MVP, yet even she says sometimes her best move on court is to get out of Gray’s way.

The 5-foot-11 guard has averaged 23.3 points, 7.1 assists and 3.9 rebounds while shooting 60.5% from the field in eight playoff games. The Aces enter Game 3 on Thursday (9 p.m. ET, ESPN) in Connecticut looking to complete a sweep of the best-of-five WNBA Finals. Gray’s stretch of success is something most players don’t even daydream about.

“She makes big plays,” teammate Kelsey Plum said. “She wants the ball in big moments. You feel safe when she has the ball.”

If you’re the opponent, it feels very dangerous. Gray, who turns 30 in October, is playing with the unshakeable confidence of a veteran at her peak. She is 18-of-27 (66.7%) on contested shots in the WNBA Finals — all other players combined are shooting 36% on contested shots — and has five 20-point, five-assist games this postseason, one shy of the all-time record, according to ESPN Stats & Information research. Gray’s overall 60.5% field goal percentage ranks fourth all-time of any player in a single WNBA postseason (minimum 100 attempts).

And last year, Gray made her Olympic debut and helped the U.S. women win gold at the Tokyo Games.

But Gray’s road here was rocky, especially given how her WNBA career started. “It was tough,” she said. “A couple of the hardest years.”

Eight years ago, Gray was the No. 11 pick in the 2014 WNBA draft, going that low because of concerns about her knee, not her talent. A fractured right kneecap had ended her senior year and college career at Duke in January 2014, four months before the draft. Gray had dislocated the same kneecap the previous February and had missed the 2013 postseason.

She didn’t play in the 2014 WNBA season, during which time she really took stock of her life and her basketball career.

“When basketball gets taken away from you, what do you do outside of that?” Gray said. “One thing is to find purpose in other things; what else can make me happy and fulfilled in different ways.

“My circle got a little smaller. I started digging deep on what I actually wanted my next few years to look like. I always tell people there is a plan, a map for you. And if you don’t see somebody doing it, just create your own. I feel like I’ve done that.”

In Gray’s rookie season in 2015, she was a reserve with the Connecticut Sun, the team she is facing now for the 2022 WNBA title. She averaged 6.9 points for the Sun, who went 15-19 and missed the playoffs.

That winter, then-Los Angeles Sparks coach Brian Agler went to Spain, where Gray was playing. He watched her and thought she could help his 2016 Sparks, who had post players Candace Parker, Nneka Ogwumike and Jantel Lavender, but needed a youthful boost at guard. On draft day 2016, the Sparks selected forward Jonquel Jones and then traded her to Connecticut for Gray.

The deal worked out well for both teams. Jones has since led the Sun to the WNBA Finals twice, in 2019 and this year, and was MVP in 2021. Gray went to the WNBA Finals twice with Los Angeles, winning in 2016, and is now making her third Finals appearance. This time, it’s with Las Vegas, where she signed as a free agent in 2021.

Agler recalled a moment late in the 2016 season when Gray had a four-game stretch where she had played single-digit minutes, followed by a game where she didn’t play at all. He later texted her to not read anything into it because the team definitely would need her the rest of the way.

“Her response was, ‘I’m just glad we won; don’t worry about it. I’ll be ready for the next one,'” Agler said. “That’s just how she is, such a team player and such a leader.”

Sure enough, Gray scored 20 points in the Sparks’ next game two days later and played double-digit minutes in every game the rest of the season as Los Angeles went on to win the WNBA championship.

In all, Gray played five years with the Sparks. A native Californian who grew up a fan of the Sacramento Monarchs and their point guard Ticha Penicheiro, it was difficult for Gray to think about leaving the Sparks. But Las Vegas wasn’t far away, and the Aces put on a full-court press to sign her as a free agent.

“It wasn’t just one thing,” Gray said of her decision to join the Aces. “It was how the organization was from top to bottom, including the conversation I had with [team owner] Mark Davis. And the team’s personnel.

“A’ja was the one I had a relationship with from USA Basketball, and then when I came to visit here, it just felt natural.”

Last season, Gray helped the Aces reach the semifinals, where they took the Phoenix Mercury to five games but lost. Las Vegas was left distraught, but it made the Aces all the more determined for 2022.

Gray said her 2016 WNBA championship experience helps to a degree in pursuit of this year’s title, but it was also a long time ago in sports terms.

“The game has changed from 2016 to now, like there are so many more 3s going up,” Gray said. “But you remember how hard it is to get here. By the playoffs, it really becomes a laser focus for me and I don’t respond to much else, even to my closest people. They know; I become a little bit of a hermit.”

On the court, she is a marquee attraction, and her shot-making has been a highlight of the WNBA postseason. Gray — who was left off July’s All-Star rosters but named MVP of the Commissioner’s Cup championship game two weeks later — shot 49.1% from the field and 34.0% on 3-pointers in the regular season, but has increased those numbers to 60.5% and 52.0% (26 of 50) in the playoffs.

“What makes her so special is her ability to make contested shots,” Sun coach Curt Miller said. “This league is filled with incredible players that make open shots. What separates Chelsea is she makes as many contested shots as anyone. Chelsea is elite at it, against a variety of players guarding her, in her face.”

Two things help make it possible: Gray doesn’t need much space, and she has a high release on her jump shot. Gray is able to lean back and shoot with the ball over her head, making it very difficult to contest.

Even her teammates sometimes find themselves marveling at the shots she makes, especially at clutch moments. Away from basketball, they love her sense of humor and her wide-ranging musical taste. For Wilson, the connection with Gray as teammates and friends has been a joy these past two years.

“I never met someone I was watching from afar, and then when we got to USA (Basketball), it felt like we were just reading each other’s minds,” Wilson said of first playing with Gray in a U.S. national team camp. “I was like, ‘I need her as a teammate.’

“We’re always on the same page. And she kind of helps me when I don’t know how to verbalize things. Chelsea puts it out there. I think we just bounce off each other.”

They also have the same competitive drive, which the Aces have benefited from immensely.

“That killer instinct and just the will to win, it brings us together,” Wilson said. “We need that connection. It’s a beautiful thing.”

Becky Hammon has called Gray her surrogate on court; the two immediately connected when the coach took over the Aces this season. Hammon went through two serious knee injuries during her WNBA career, and can relate to how hard it was for Gray to start her WNBA career sidelined by injury.

“But it builds a toughness in you that you’ll need down the road,” Hammon said. “It’s devastating when you’re an athlete, but then you really only have two choices. You either don’t get better, or you work your ass off to get better. We’ve seen what Chelsea did.”