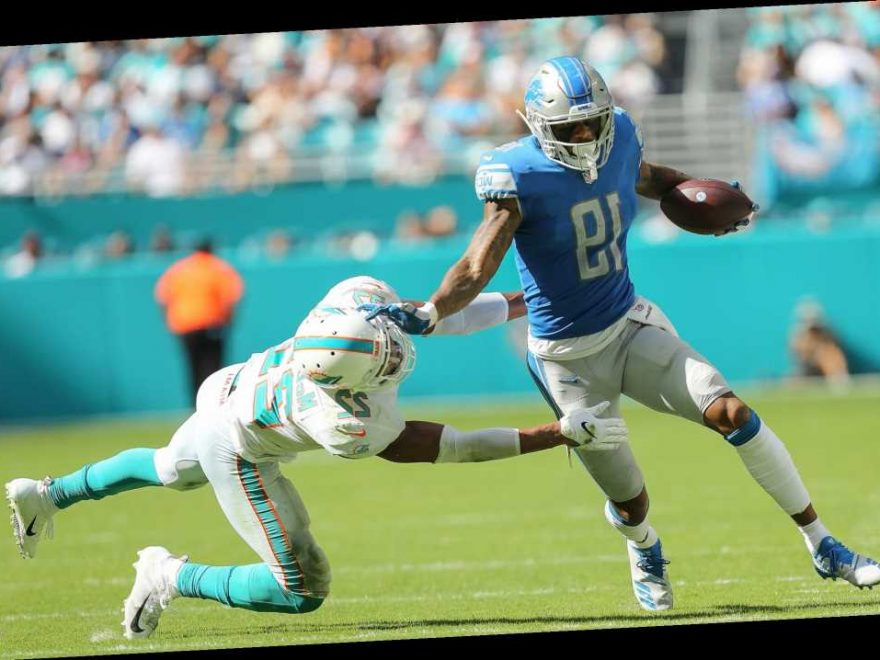 The questions Giants need answers to before signing stud receiver

It is Happy Golladay Season for the Giants.

They grabbed a big prize Saturday in free agency, landing Kenny Golladay, considered the top wide receiver on the open market. It is a move that instantly upgrades their entire offense and gives quarterback Daniel Jones the tall, long-armed target missing from the attack the first two years of his NFL career.

The Giants did not fool around here.

They gave Golladay a four-year deal worth $72 million, with $40 million in guaranteed money, according to a source. The $18 million annual average is the highest for a wide receiver this year in free agency.

Golladay arrived at the Giants’ facility Thursday afternoon for a visit that included dinner and extended into Friday evening, with Golladay meeting head coach Joe Judge, members of the offensive staff and also general manager Dave Gettleman.  The Giants wanted to get Golladay in their building, check him out physically and medically and also figure out if he would be a culture fit for a franchise that, with Judge calling the shots, is not blinded by talent alone.

The meeting served to assuage any concerns the Giants had with Golladay and then the two sides went to work trying to get a deal done.  Golladay stayed in the area and a contract was hammered out on Saturday.

The 6-foot-4 Golladay averaged 16.8 yards per catch in his career.  He specializes at hauling in what is thrown his way, as his 53 contested catches since 2018 ranks second in the NFL.  He has two 1,000-yard receiving seasons in his four years, all with the Lions.  In 2019, Golladay led the league with 11 touchdown catches.  In an injury-filled 2020 season, he had 20 receptions for 338 yards.

In his four-year career, Golladay in 47 games has 183 receptions for 3,068 yards and 21 touchdowns.  At 27, he is the same age Plaxico Burress was when the Giants signed him prior to the 2005 season.  The Giants hope Golladay can make an impact on the field and help Jones similar to the way Burress’ long reach helped in Eli Manning’s development.

Golladay joins a receiving corps that features Sterling Shepard in the slot and Darius Slayton as an outside threat.  Add in Saquon Barkley, returning from knee surgery — he played in only two games last season – and Evan Engram playing in a contract year and suddenly, the Giants can fill the field with playmakers on offense.

This addition means the Giants do not need to feel pressure to take an offensive playmaker early in the upcoming NFL draft.  They can locate a player at a different position — they need pass rushers and cornerbacks and also an offensive lineman — they might view as a better prospect and a greater need than the wide receiver that might be available to them with the No. 11 overall pick.

So, why did Golladay not get scooped up in the first few days of free agency?

There was no gold rush for wide receivers.  Golladay was said to be looking for $20 million per year and that was simply not available this year for anyone at his position.  Two prominent receivers, JuJu Smith-Schuster and Will Fuller, opted for one-year deals ($8 million for Schuster to stay with the Steelers, $10.6 million for Fuller to sign with the Dolphins.  The contract with the highest annual average for a receiver went to Nelson Agholor, who signed a two-year, $26 million deal with the free-spending Patriots.  Corey Davis averaged $12.5 million on a three-year deal with the Jets.

Teams had questions about Golladay’s health and also about his desire to get back onto the field last season. He played in only five games in 2020, missing two games with a hamstring issue and nine other games with a hip flexor injury.  This is why the Giants on Friday dent Golladay to the Hospital for Special Surgery to get checked out.

There were also concerns about social media posts and how he fits into a team structure.  Last October, he posted a picture on Instagram and the caption “This s–t gone cost you!’’  It seemed to be Golladay lashing out at the Lions for not giving him the money he wanted in a new contract.  Not long after that, he “liked’’ an Instagram post that announced the firing of head coach Matt Patricia.

Golladay, before meeting with the Giants, visited with the Bears.  There was a report the Bengals offered him a one-year contract and another report the Bears did the same thing.  Golladay decided the Giants were his best bet.