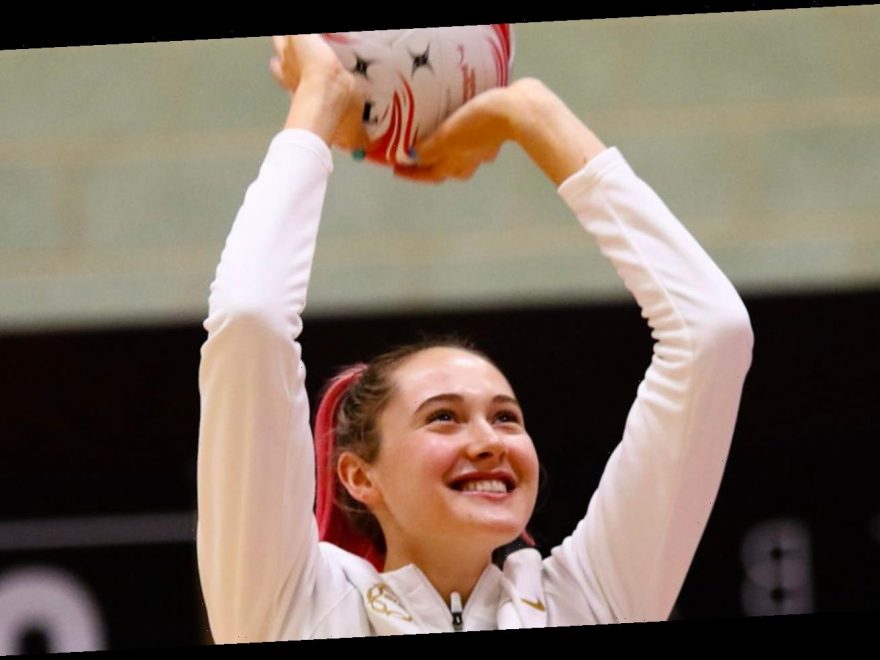 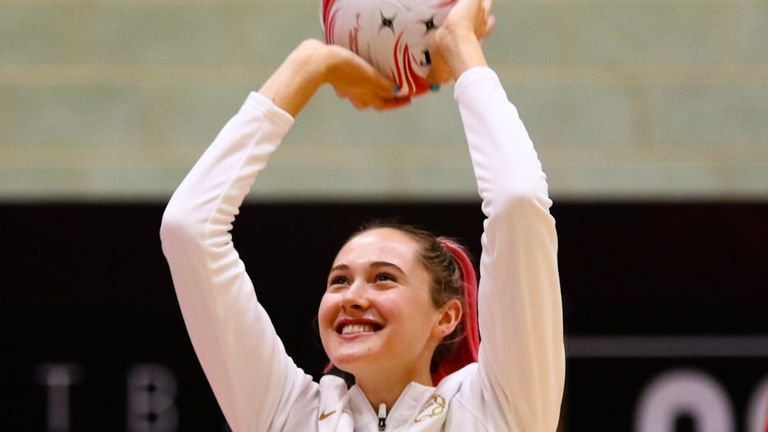 So much has happened since my last diary, you may want to grab a cuppa for this one, but before I dive in, I just want to say that I really hope you’ve all been keeping as safe and well as possible.

We’re still in really strange times so keep on talking to people around you, do what you can to stay active and also, hopefully, you’ll be able to enjoy all of the live netball that’s coming up too.

So, what’s been happening since my last post? Well, I was so lucky to be able to go out to New Zealand for a month on tour. I found it so exciting not only being back with the Roses but also knowing that I would be going back out to New Zealand again to play this season with the Southern Steel.

I actually got to meet my new coach and some of my Steel team-mates, which was so amazing to actually speak face to face and not just through a screen!

New Zealand was such a cool place and very chill. It was amazing, and yet slightly weird, to be somewhere that’s kind of ‘normal’ in these current times. Once we were out of our two-week quarantine after many COVID tests, we didn’t need to wear masks anywhere or have to be socially distanced from other people, it was a bit surreal in a way.

Here, you always go through the same checklist before leaving the house now; phone, keys, wallet, mask, hand sanitiser and when you were there that wasn’t a thing. It was weird, but in a really good way. 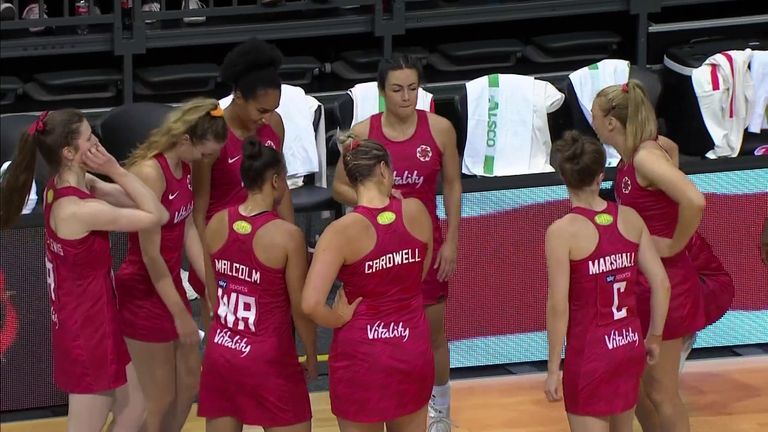 What were the highlights of the tour? Well, everyone had a run out against the world champions and we took a lot of positives and learnings from our time there.

Serena’s 100th cap was amazing, her play was on fire; what a moment for her and a total honour to say I played with her in that game.

Personally, I really enjoyed having proper match play and some awesome competition again. It had been such a long time and I just thoroughly enjoyed playing with lots of different combinations. It was a really positive tour, I loved it.

The Kiwis are phenomenal players. Sulu (Fitzpatrick) at the back had an amazing series. It was difficult working out how to play against her and a good challenge, which I really loved!

I love playing against different styles, for example New Zealand play completely differently to say South Africa or Uganda. I really enjoy thinking about what you can do against different teams and working out how to change my play to get the best against my opponent.

Obviously, the Kiwis’ have their zonal play, and it’s great to face that in person because we do so much analysis on it and have plenty of tips and tricks up our sleeve – which I obviously can’t tell you because I’d get into big trouble if I did – so to meet it head-on was so good, especially with the Commonwealth Games around the corner. You think that four years is a long cycle but it’s really not!

Once we’d come back from New Zealand, there was a little bit of down time which I spent at home with my family and fur babies; I did lots of cooking, dog walks, running and home training.

Also, Kat Ratnapala has been awesome letting me be a training partner with Saracens Mavericks until I leave for New Zealand. I’ve really got stuck into it and felt so privileged to be able to actually get back in the gym and on-court training with the girls. 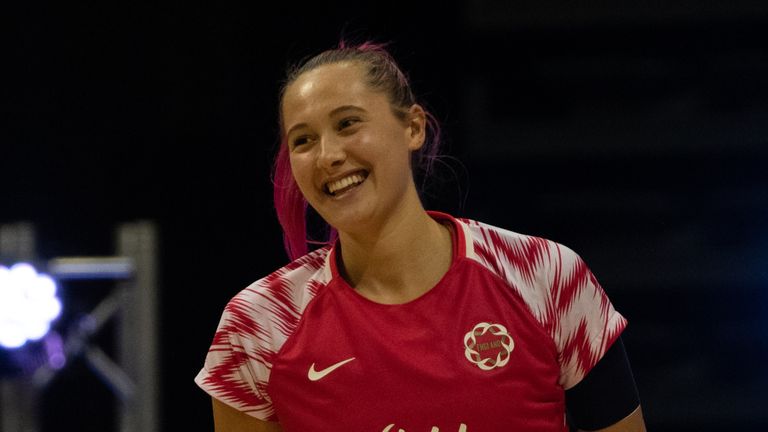 At the end of the year, we had a couple of England camps and because of COVID, they were completely different to what we’re used to.

We were tested regularly and the only time we were able to all be together was on court, other times you had to be in your room, masks worn everywhere, everything sanitized and you’d have all your meals delivered to your bedroom door.

Everything was in place to try and keep everyone as safe as possible – we’d do anything to be able to play netball, so we took it all in our stride.

We did loads of ZOOMs from our rooms to keep in touch outside of training and we were able to go for a daily walk with one other person in masks, so I can now say that I am very aware of how big Loughborough Uni’s campus is and I pretty much know where most things are now, which is a good thing!

Sometimes we’d all log onto ZOOM and have a cheeky little ZOOM party, or if we were eating dinner, we’d link onto a video chat and have a good laugh together. There was room for quiet time too though, it was a really good balance.

We’re a really close-knit team so it really does feel like a family. It’s really nice to just be able to talk to anyone and have a laugh, but also if you need to be serious you can. Everyone understands everyone’s uniqueness and we just get on so well as a Roses squad. 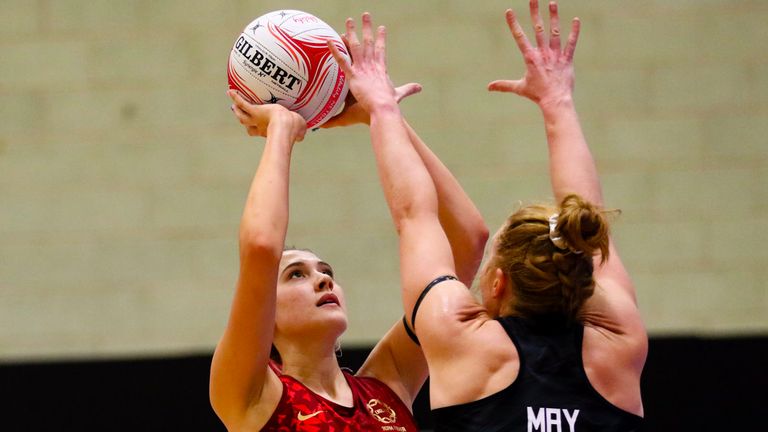 Early January, we had the Jamaica series scheduled in but unfortunately, due to COVID, this wasn’t possible. With tons of hard work behind the scenes, England netball announced the Vitality Legends Series, which would enable us to get some much-missed competitive match play.

So, we were all back in pre-tour camp under the same conditions as before, however, this time a lot of the girls had exams and loads of revision to do, so we all supported each other.

On court, we got the three wins which felt amazing because we were facing a team of quality players and we really didn’t know what to expect. We knew how great they were as individuals and then when they came together, I remember looking at Jo Trip and Sam May after their first few minutes and thinking that they looked like they’d played together for years!

The series was really special, not just being able to be on a home court, but also for another big reason – the best dress ever! We had our ‘agents of change’ on our dress, so the names of the people who have been so influential for us in our careers on our hearts.

That was just such an incredible touch and it felt so, so good. I had my dad’s name on my dress and I felt such an immense sense of pride going out there knowing that a little bit of him was with me. It was the same for all of the girls and when we all got our dresses, we were all a little bit emotional.

@GeorginaFisher4 thanks my beautiful G, but you did all the hard work yourself. Me, and of course Mumma have the easy bit “Loving you” and yet again you given me a reason to well up. https://t.co/rgoFJXhSYI

I didn’t actually tell my dad that his name was going to be on my dress! It came out on Twitter, and everyone who knows my Dad knows he loves Twitter, but he’d not fully taken in that bit of the announcement when he’d first looked at it. He’d only half-read it, so he went home and told my mum that they were going do this amazing thing with the names on players’ dresses.

She nodded, knowing what I’d done, smiled back at him and then told him that I’d put his name on my dress. He teared up, this larger than life grown man had a little tear because he was so chuffed and proud, that really made me so happy.

It was so lovely, and it meant everything. Everyone said that it was their favourite dress and I completely agree. I felt totally amazing in it. People don’t always see the journey that players take to get on that court, but my family know what it’s taken and how important they’ve been.

We will never forget Mike & always celebrate the impact he had on our lives @OldhamNetball @thundernetball. Playing for Mike with my sister @AshleyHallUK was the best time of my life. Smiling at all the great memories & his famous one liners! I’ll wear this with pride #legend pic.twitter.com/lZlLo9aRMA

It was the same for all of the girls, some were recognising previous netball coaches or other people who played a huge part in their own journeys. It meant so much and was an amazing opportunity to be able to show that person your gratitude.

So what now? I’m just getting some bits and bobs sorted visa-wise, it’s been a little bit hectic with that side of things, so much paperwork and it’s not easy!

The plan is to go out to New Zealand in early March ready for the ANZ Premiership season starting towards the end of April. Steel have given me a programme which I’m following, and I can’t wait to get with my team-mates and experience netball in New Zealand.

It’s something I’ve always, always wanted to do, and I can’t wait to get stuck in. I’m so excited to submerge myself into that lifestyle; I’ve never lived outside of Hertfordshire and now I’m going across the other side of the world to play the sport I love! How crazy is that! They always say go big or go home… so I’m going big!!

Anyway, that’s all from me for now… keep staying safe and enjoy the netball that’s coming, I’m so looking forward to the Vitality Superleague starting this weekend, even if it will be strange being a spectator. Take care and we’ll catch up soon!