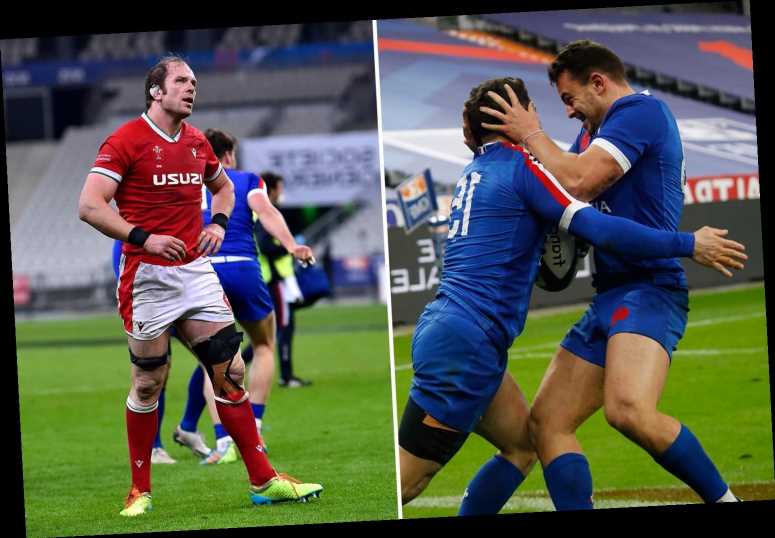 WALES were cruelly denied the Grand Slam after France score a winning try two minutes into stoppage time after a bonkers, incident-packed battle in Paris.

It finished with 13 Welsh players trying to hold out against 14-man France, as Toby Faletau and Liam Williams were both shown yellow cards after France lock Paul Willemse was sent off for eye-gouging. 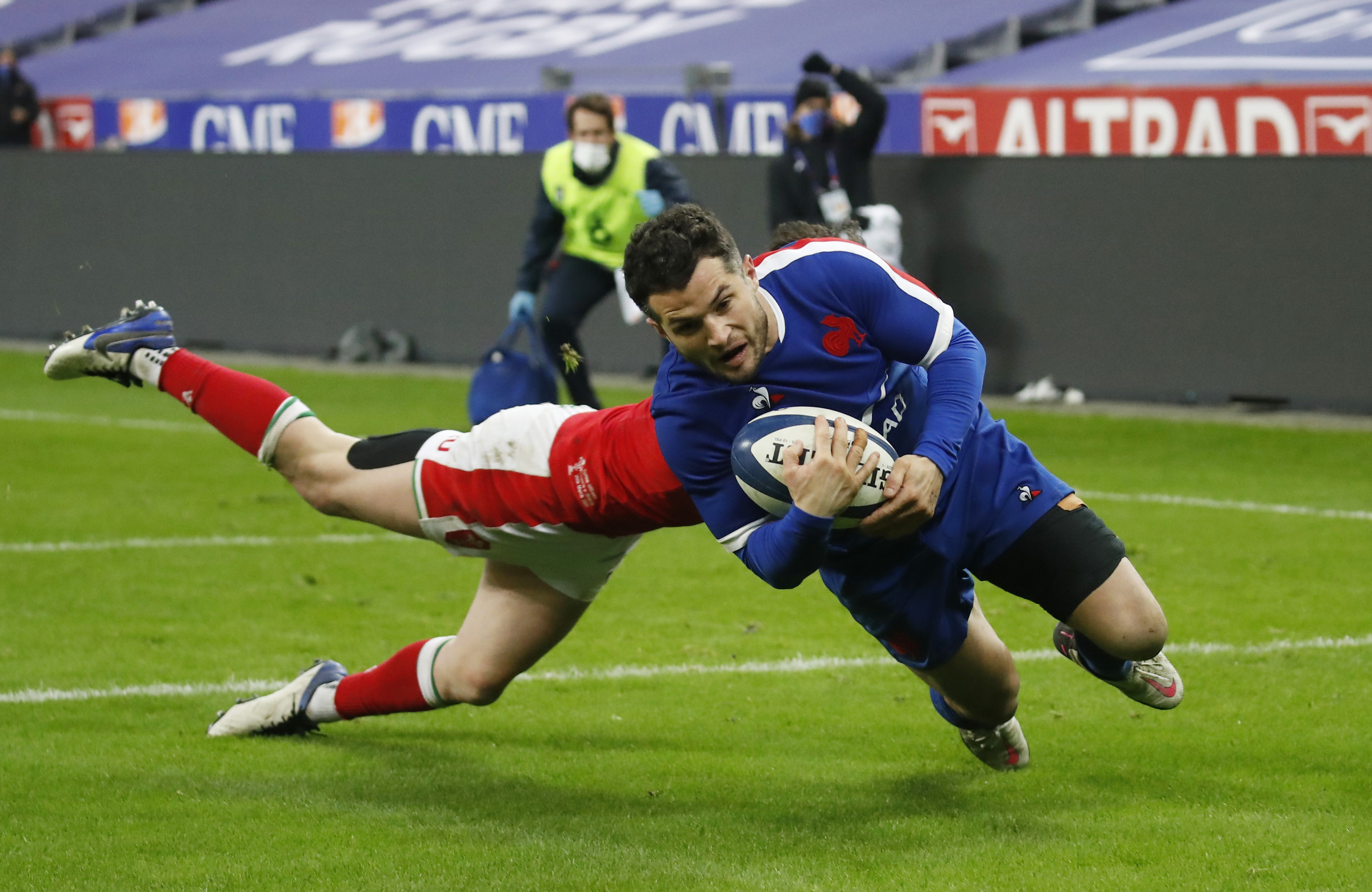 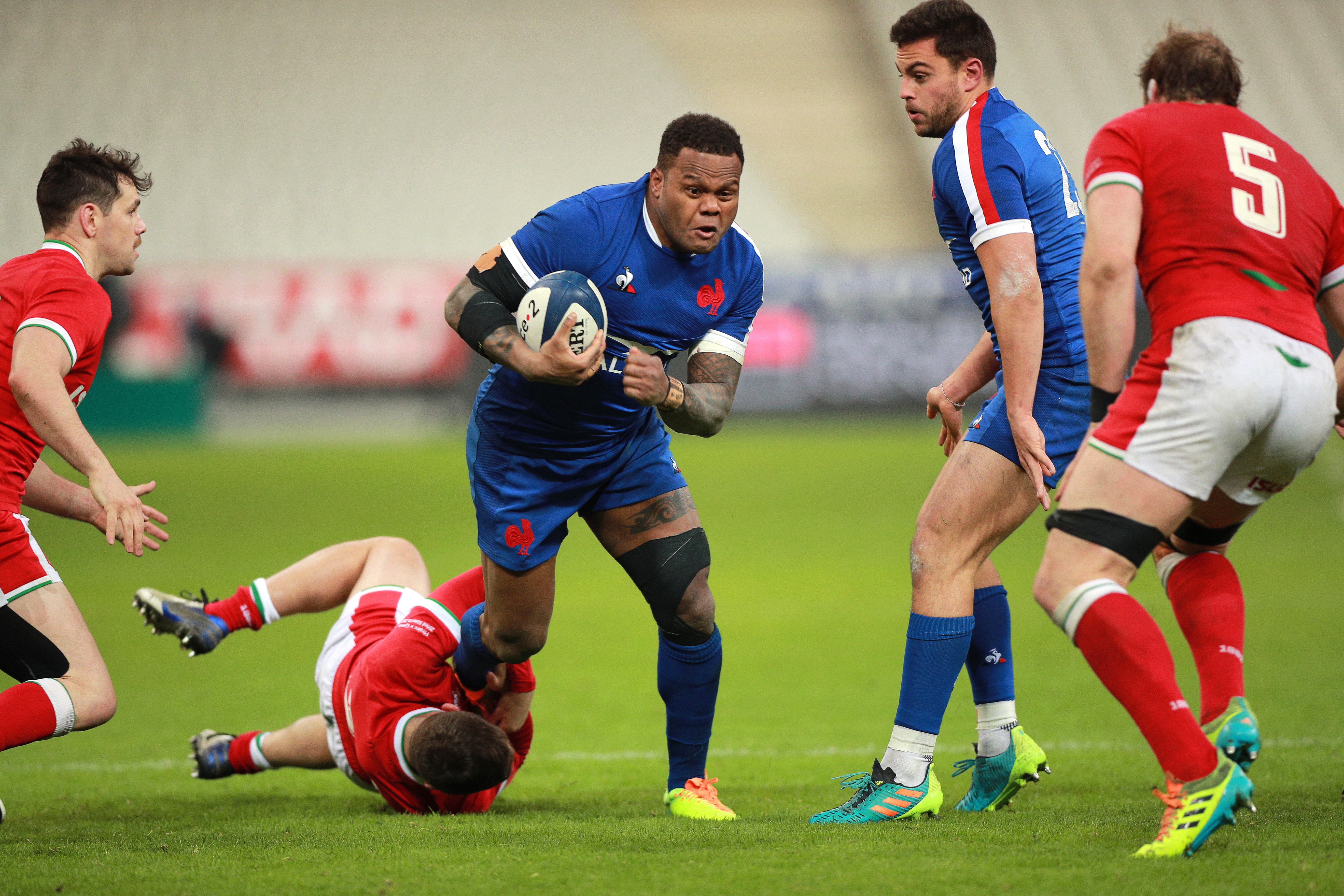 Wales looked home and dry when Willemse was sent off on 68 minutes, with Wayne Pivac’s team recovering from the shock of conceding two tires in the first 15 minutes to power into a ten point lead.

But France suddenly started playing after becoming the third team to have a man sent off against Wales, and Faletau and Williams were both sin-binned as the pressure was ramped up.

French skipper Chalres Ollivon  set up a grandstand finiosh by scoring France’s third try –and Dulin raced over wide out with the clock deep into the red to break Wesh hearts.

It was a crazy end to a crazy game, full of brilliant, breathless rugby from start to fi finish.

Dulin’s try also gave France a four try bonus point – and if they repeat the feat against Scotland on Friday, they will also deny Wales the Championship title.

The frantic, frenzied, action never let up from the opening minutes

Wales did not need reminding of how dangerous Antoine Dupont can be, but it was the scrum half’s sniping run that set up the first score after just six minutes.

Josh Adams took him high, and from the resulting lineout there was no stopping  big lock Romain Taofifenua from a couple of yards out.

Matthieu Jaklibert converted, but far from knocking the stuffing out of Wales, that early setback sparked a furious response.

Wales attacked from first phase, with Rees-Zammit injecting pace and Gareth Davies ploughed over the line – only to be wrapped up by France skipper Charles Ollivon, who somehow managed to prevent the Dragons scrum half grounding the ball.

It was a short-lived reprieve for the home team. 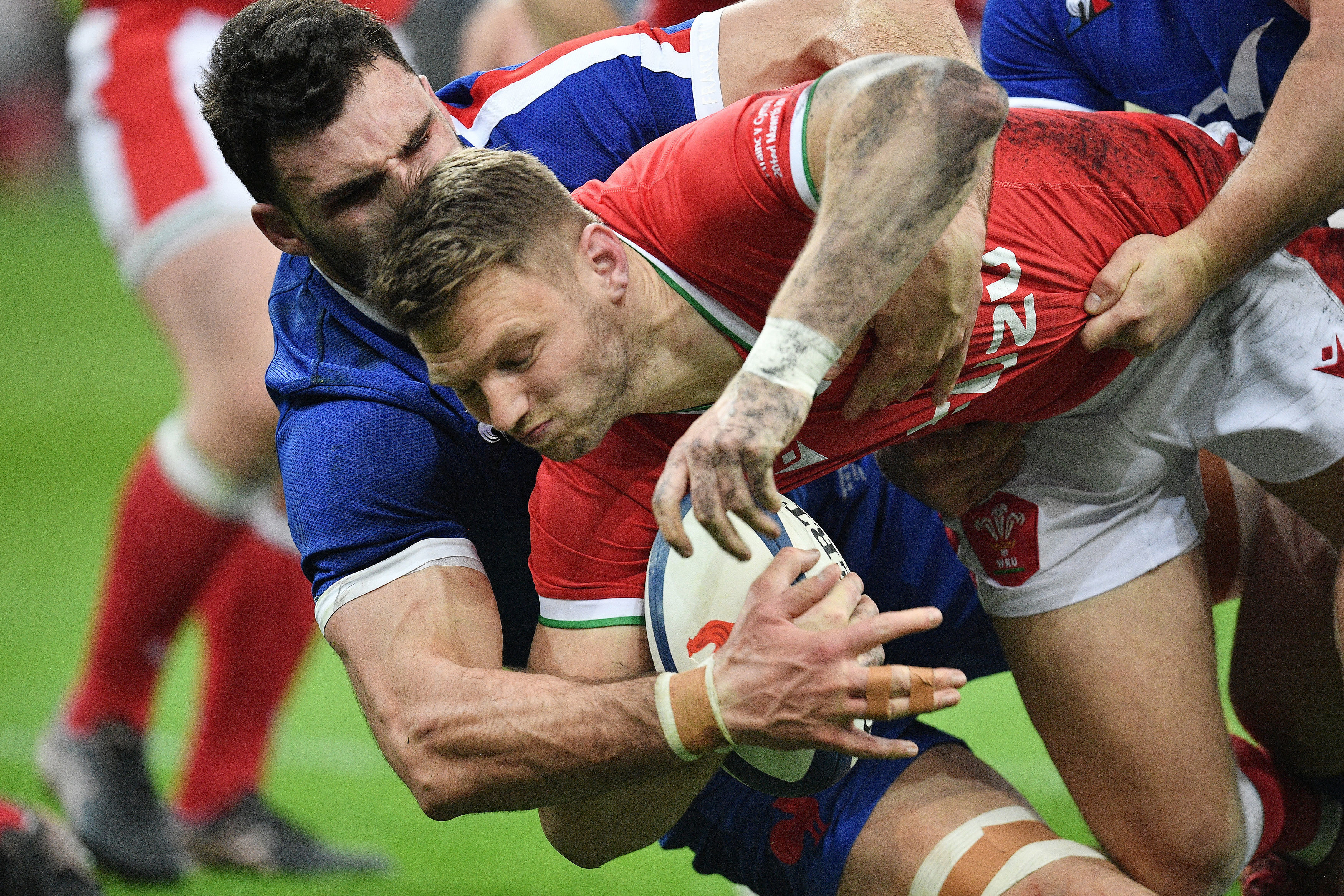 The Welsh forwards hammered away at the line, and with the French expecting another pick and go, Davies hurled the ball to half back partner Biggar, and he crashed over.

Biggar added the extras, and the frantic early pace continued with Brice Dulin nudging a clever kick over the top, allowing Jalibert to gather and send Dupont over for another converted try.

Back came Wales, and they went through 14 phases before Josh Navidi ploughed through two tacklers to score.

That made it four converted tries in the first 18 minutes, and after a brief lull Wales were ahead for the first time when Biggar banged over a penalty to make it 17-14.

With Jalibert off for a concussion check, his replacement, Romain Ntmack took over the goal-kicking duties, and levelled the scores with a 30th minute penalty.

But Wales had clearly knocked the swagger out of the home team, and that impression when Ntamack gratefully kicked the ball dead to end a high octane first half.

Former England captain Martin Johnson, on duty as a ‘neutral’ pundit alongside former Wales stars Sam Warburton and Jamie Roberts, also sensed France were relieved to be level at the break.

He said: “I thought France would be too strong at home, but Wales have finished the half in the ascendancy. The game is there for them to win.”

Wales certainly started the second half on top, with Toby Faletau bursting clear from the back of a scrum, setting up the position for Biggar to kick Wales back into the lead.

And it got even better for the Dragons as flanker Justin Tipuric put a clever kick behind the French defence, and Tomos Williams flipped the ball up for Liam Williams to dive over. 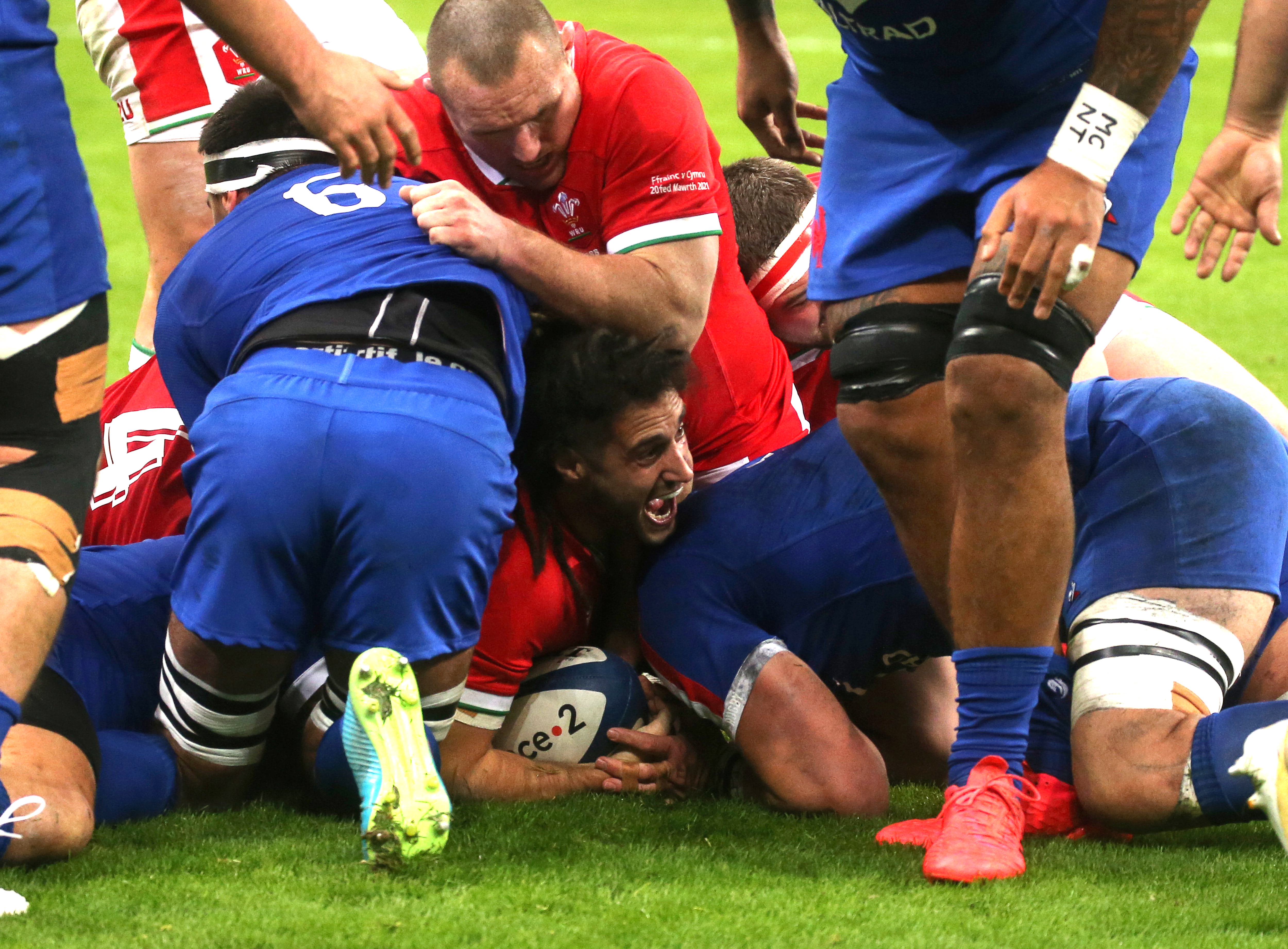 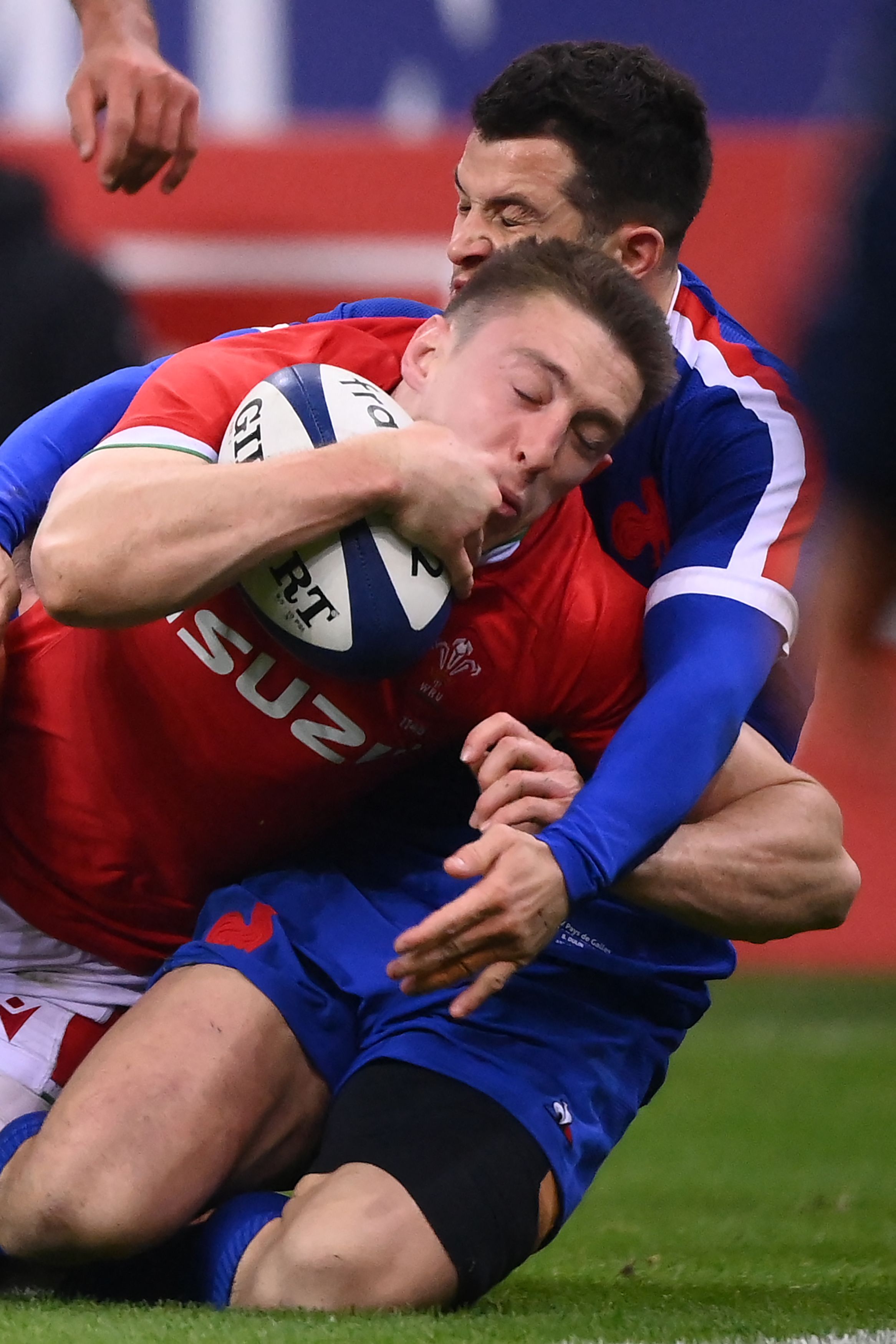 There was an agonising wait as the officials checked for a possible knock on by the replacement scrum half, and whether this team-mate had actually got the ball down with three Frenchman draped around him .

Both decisions went in Wales’ favour, and with Biggar converting they suddenly had a healthy ten point cushion.

Ntamack shaved three points of the deficit with another penalty, but Wales were ten clear again when Biggar replied with apenlty of his own.

Louis Rees-Zammit, Dulin, and Ollivon all had ‘tries’ disallowed during the incredible finish, and it was France who found a way to win against all the odds.