American swimmer Michael Andrew has been vocal about his refusal to have a vaccine before the Tokyo Games. Now, as the reality of the COVID situation at the Olympics starts to hit, former US swimmers are calling him out for putting the health of the powerhouse Team USA squad in peril.

Andrew is a curious figure in the sport at the best of times. Driven by his coach and father Peter, he began racing professionally at just 14 and had a pool purpose-built in his backyard. He will swim three events (200m individual medley, 100m breaststroke, 50m freestyle) in Tokyo plus a selection of relays.

But it was his admission about not being vaccinated that has caused the most division ahead of the Olympics for the Americans. The 22-year-old told journalists at the Team USA media day before the Games that it was because he was concerned about an interruption in training.

“I’m not vaccinated,” Andrew said. “My reason behind it is, for one, it was kind of a last moment, I didn’t want to put anything in my body that I didn’t know how I would potentially react to.

“As an athlete on the elite level, everything you do is very calculated and understood. For me, in the training cycle, especially leading up to trials, I didn’t want to risk any days out. There were periods where you take a vaccine, you have to deal with some days off.”

Around 90 per cent of the US Olympic team has been vaccinated, meaning Andrew is an outlier, while his protestations about missing training days always seemed tenuous. On the other side of the Pacific, the Australian team had their second Pfizer shot delayed for Olympic trials, having it administered the day after the team had been finalised. 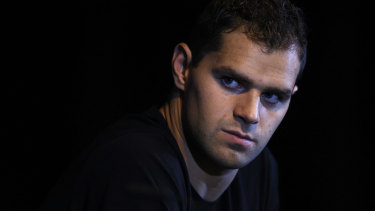 Michael Andrew is banking on immunity, having already contracted the virus.Credit:Getty

Prominent USA Today columnist Christine Brennan has already admonished Andrew for his disregard for his teammates and the seeming braggadocio with which he spoke of his vaccine choice. Andrew says part of his logic was that he had already been infected with COVID and therefore had a natural immunity.

“He sounded proud as he spoke, proud of his selfish, foolish ways. Proud to be a hindrance to his teammates, a worry to all. Proud to be doing whatever the heck he wants, no matter how it affects anyone else,” Brennan wrote.

She’s not alone in condemning Andrew, even if Tokyo organisers and the IOC never made it compulsory for athletes to be vaccinated to compete. With four positive cases in the Village already and the supposed invincibility of its anti-viral procedures already punctured, Andrew’s stance has started to attract more criticism.

Leading the way was Rio backstroke gold medallist Maya DiRado, who posted a lengthy thread on Twitter questioning his motives and the impact it could have on those around him in what is usually an incredibly close-knit USA squad.

“That Michael would make a decision that puts even a bit of risk on his teammates for his own perceived well-being frustrates me,” DiRado wrote. “Are we protecting the vulnerable? Are we helping to stop the pandemic that is continuing to wrench loved ones from their families in both our home country and the country that’s hosting us? Michael does have the right to do anything – but not everything is beneficial.”

Another American gold medal winner from Rio, Anthony Ervin, fired back to suggest that Andrew has immunity against COVID given he has already been infected. But US medical experts have already recommended vaccinations for former patients given the rise of new variants of the disease.