James Anderson took his 598th Test wicket – but three dropped catches and Azhar Ali’s century delayed the seamer’s push for history and England’s bid for victory in the final Test at The Ageas Bowl.

Anderson moved to within two wickets of becoming the first fast bowler to 600 scalps in Test matches – and would already have reached the landmark but for three fluffed chances late on day three.

Rory Burns and Zak Crawley shelled opportunities at slip in the same over, while Stuart Broad grassed at mid-on, before Anderson (5-56) nicked off Naseem Shah to complete his 29th Test five-for and dismiss Pakistan for 273 with half an hour remaining.

Joe Root enforced the follow-on, with Pakistan 310 runs in arrears and the fact the forecast for day five in Southampton is grim, but no further play was possible due to bad light, leaving Anderson still waiting to join the 600 club, a group that so far only features spinners Muttiah Muralitharan (800), Shane Warne (708) and Anil Kumble (619).

Anderson dismissed Asad Shafiq (5) with his sixth ball of a rain-interrupted morning to leave Pakistan 30-4 in their first innings – the seamer having removed Shan Masood (4), Abid Ali (1) and Babar Azam (11) on Saturday evening.

But visiting captain Azhar’s superbly-compiled 17th Test hundred held up up the hosts as Pakistan replied to England’s monstrous 583-8 declared and he opted to go straight back in – before the umpires stepped in.

Azhar’s first notable score of the series came on a flattish pitch but he still had to contend with some hostile, 90mph bowling from Jofra Archer, who also rattled Mohammad Rizwan (53) on the grille with a bouncer. 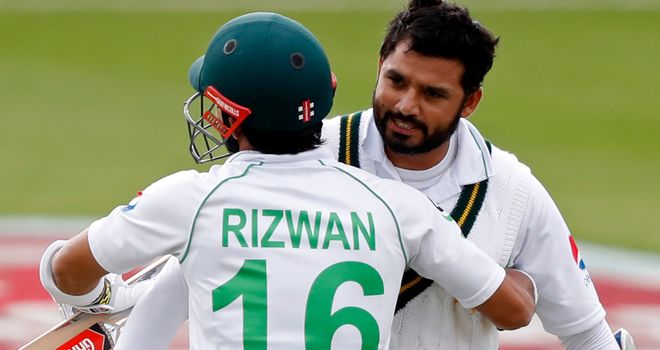 Azhar and Rizwan combined for a sixth-wicket stand of 138 before England rallied in the evening – Jos Buttler taking two outstanding diving catches down the leg-side, with his one-handed grab to remove Shaheen Afridi an absolute peach.

England will still feel confident of picking up the 10 wickets they need to wrap up a 2-0 series win but may need to do so on day four with rain set to hit on Tuesday. 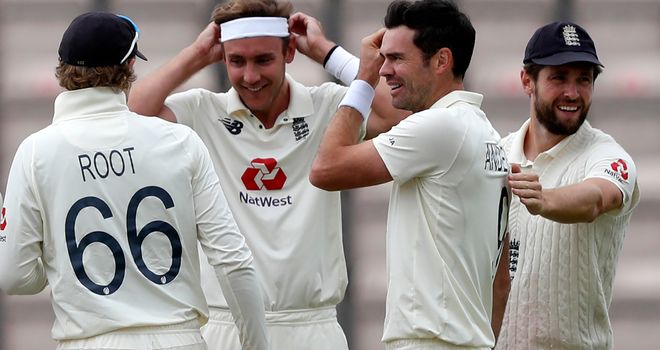 Anderson is two wickets away from 600

Anderson’s burst on the evening of day two had reduced Azhar’s side to 24-3 and when Shafiq prodded the paceman to Joe Root at slip moments before day three’s initial rain break, England looked poised to run through the line-up.

Azhar, though, found a decent ally in Fawad Alam (21), who managed his first Test runs in over a decade during a fifth-wicket stand of 45, and an excellent one in Rizwan, who tonked Dom Bess over mid-off for a fifty-sealing six.

Archer’s venomous spell after lunch – which had been taken at 12.30pm after a second bout of rain – failed to yield a wicket, while England lost their final review during it looking for Azhar caught behind on 21. 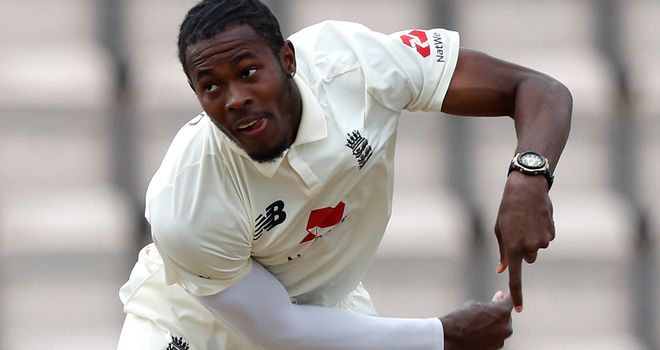 Archer’s devilish short ball grazed the batsman’s shoulder and not, as England hoped, his glove, leaving the hosts out of DRS options, having burned one last evening and another in the opening session on day three.

Fawad fell for 21, however, with off-spinner Bess – bowling for the first time since the first Test after going unused in the second – finding the edge with sharp turn and bounce as Pakistan sunk to 75-5.

Rizwan was subjected to an lbw appeal from Broad on seven, while he edged Anderson shy of Buttler on nine before he was clonked on the grille by Archer on 13 as England pushed hard for a sixth wicket.

But the sparky wicketkeeper-batsman rode out the tricky spell and provided a fine foil to Azhar, who accrued many of his runs behind square by playing late and also became the fifth man from Pakistan to pass 6,000 Test runs. 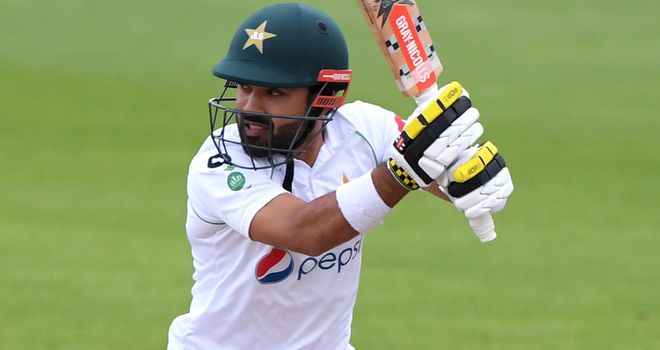 The 35-year-old old raised his bat towards the dressing room after that milestone and then again when he completed a 205-ball ton – his second in England, third against them, and ninth outside of Pakistan and the UAE – by driving Bess through the covers.

Root was the happier captain when Chris Woakes – who was rather out of sorts on the day – had Rizwan caught by Buttler with the new ball and Broad banished Yasir Shah (20) and Shaheen (2) with the new one. 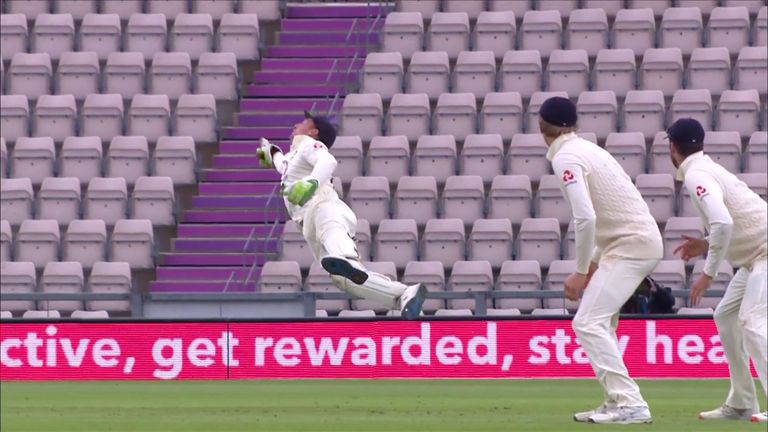 Root played his part at slip with a sharp grab above his head to get rid of Yasir but it was nothing compared to Buttler’s Superman leap to his right to snaffle Shaheen one handed as the tailender fenced down the leg-side.

Burns, Crawley and Broad suffered severe cases of butterfingers, much to Anderson’s dismay, even though Broad ran out Mohammad Abbas (1) with a direct hit as he retrieved the ball he had spilled at mid-on seconds earlier.

Anderson finally completed his five-wicket haul but must wait for history.

Watch day four of the third and final #raisethebat Test between England and Pakistan live on Sky Sports Cricket from 10.30am on Monday.