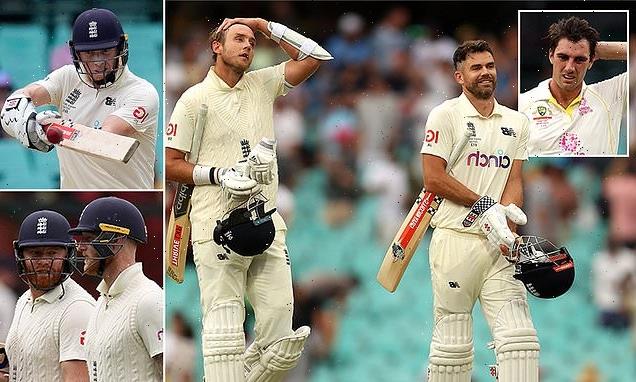 Whitewash AVOIDED! England cling on to a dramatic fourth Test draw against Australia in the FINAL over as last-wicket partnership of James Anderson and Stuart Broad survive in Sydney

England have avoided the possibility of a whitewash after a gutsy last-day rearguard earned them an unlikely draw at the SCG.

There were 64 balls to go on the final evening when England’s ninth-wicket pair, Jack Leach and Stuart Broad, joined forces. With Jonny Bairstow having fallen to Scott Boland for 41, the Australians looked set to take a 4-0 lead to Tasmania, keeping alive the prospect of a third 5-0 Ashes home win out of five.

The natural light was fading now, and a crowd of more than 11,500 growing increasingly hoarse as the balls, and the overs, ticked down. In the dugout, England’s players could hardly look.

With three overs to go, umpires Paul Reiffel and Rod Tucker told Pat Cummins it was too dark to use his fast bowlers. And so, with Nathan Lyon having just completed his 21st of the innings, the ball was chucked to Steve Smith, whose leg-breaks had not brought him a Test wicket in over five years.

To his sixth delivery, Leach pushed forward. To England’s horror, the ball caught the edge – and flew to David Warner at slip. It was a heart-breaking way to end 77 minutes of resistance. Australia fancied their chances once more.

Broad came within inches of edging the third ball of Lyon’s next over, but stoically played out a maiden, leaving Smith with six balls at Jimmy Anderson. The first was deflected just short of one of the four fielders in the leg trap, as memories went back to Headingley 2014, when Anderson fell to the penultimate ball of the Test to hand victory to Sri Lanka. 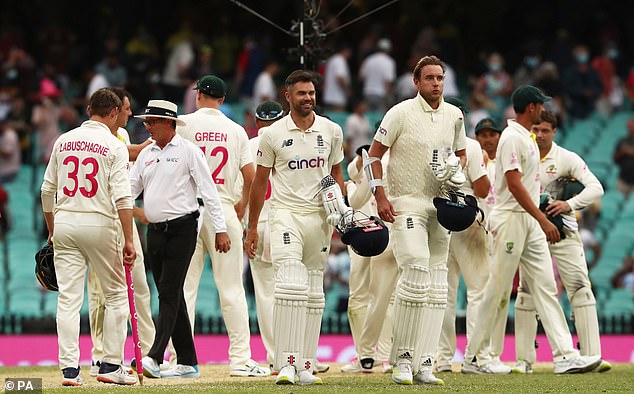 With three overs to go, umpires Paul Reiffel and Rod Tucker told Australia’s Pat Cummins that it was too dark to use his fast bowlers, as England held out for the tense draw in the final over

Anderson, though, might have preferred a different analogy: Cardiff 2009, when he and Monty Panesar dead-batted England to a famous draw.

Now, the rest of the over passed without incident, and England could breathe again. They have restored at least a little pride, leaving a small but loyal band of Barmies in the Victor Trumper Stand to sing their hosannas.

Despite their various injury problems Hobart no longer seems quite the drag it might have been had Australia cleaned up. Had they not delayed their declaration on the fourth evening, they might very well have done.

Several hours earlier, England’s hopes of saving the Test had got off to a predictably shaky start, when Haseeb Hameed was caught behind off Boland for nine in the ninth over of the final morning.

It was Hameed’s sixth successive single-figure dismissal in a row, a sequence that has done nothing to diminish the argument that England dropped the wrong opener after the second Test at Adelaide.

Hameed is staying so deep in his crease, and failing so regularly to move his feet, that the bog-standard good-length ball outside off stump feels as if it might remove him at any minute. He now averages 24 in Tests, and looks utterly bereft of ideas.

Dawid Malan was next to go, his series of diminishing returns continuing as he missed a flat-footed cut at Lyon and was bowled for four. Since the second of his two eighties, at Adelaide, he has made 41 runs in five innings. 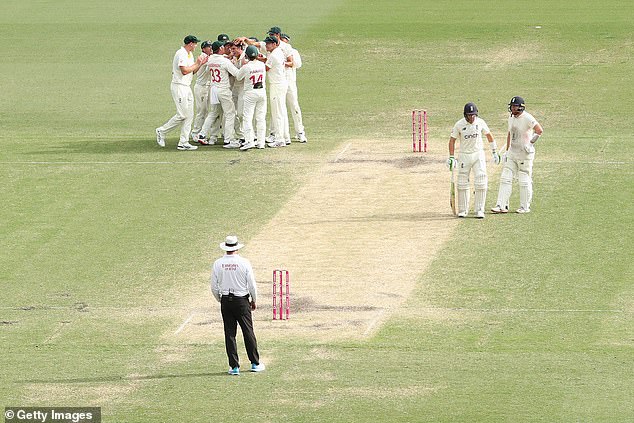 All the while, Zak Crawley was batting like a man reborn. Having said before the game he had every confidence of scoring a hundred – a suggestion that raised several pairs of eyebrows – he appeared to be on course, thanks to a series of well-organised drives and clumping pulls.

Here, at last, was the uncluttered talent who had scored 267 against Pakistan. And how, one wondered, had he averaged only 11 in the meantime?

But, after purring to 77 out of a total of 96, he was pinned by a superb yorker from Cameron Green. With lunch still an hour away, England were back in the mire.

For 25 overs either side of lunch, Joe Root and Ben Stokes, still nursing a sore left side, held firm. Stokes survived a sharp chance to Marcus Harris at short leg in the penultimate over of the morning session, then pulled Mitchell Starc for six after the break. As in the first innings, any exertion brought a grimace, and England will be left with the tricky decision of whether to play him as a batsman at Hobart.

Rain had delayed the resumption after lunch, knocking seven overs off the allocation England would need to survive. Soon, they knew they would have to do so without Root, who pushed forward at the relentless Boland and feathered a catch to Alex Carey for 24, ending a stand of 60 and leaving England 156 for four. 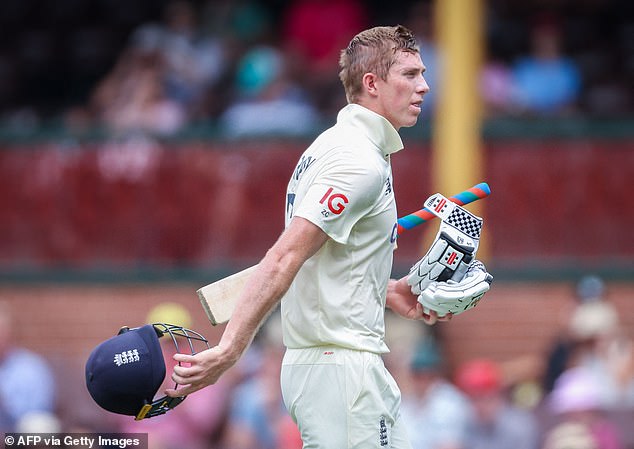 Zak Crawley was batting like a man reborn as he raced out to 77, having predicted a hundred 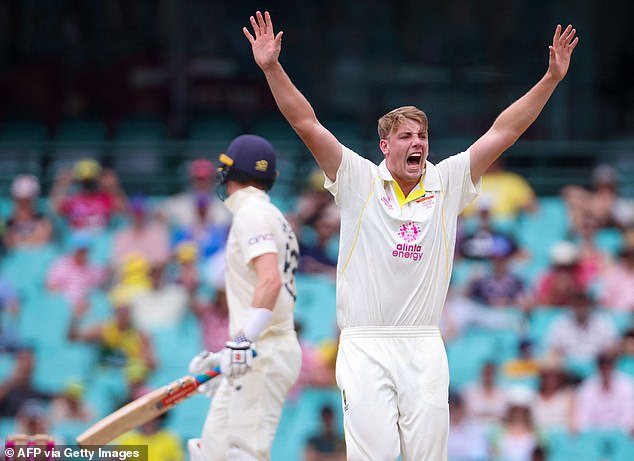 Stokes and Bairstow, England’s first-innings centurion, now ate up 16 more overs, with Stokes advancing to his second fifty of the game with a drive for four wide of mid-on off Cummins.

But the ball after lofting Lyon down the ground for four, he was unable to resist a fiddle outside off stump, and provided catching practice to Smith at slip. With Stokes gone for 60, England were 193 for five.

Bairstow was getting stuck in once more, and Jos Buttler – possibly playing his final Test innings, with his finger injury set to rule him out at Hobart – kept him company for 10 overs.

Australia, though, now had possession of the second new ball, and – with 18 overs to go and five wickets still needed – Cummins made exemplary use. First he swung one in to the pads of Buttler, whose bat became tangled up with his boot, offering the ball an inviting passage on to his pads.

Perhaps distracted by the flurry, umpire Paul Reiffel said not out, but the review said otherwise – Buttler was plumb in front. Two balls later, he found more booming swing, zeroing in on Mark Wood’s boot. As Wood collapsed to the ground, Reiffel upheld the shout. England’s review proved futile: 218 for seven. 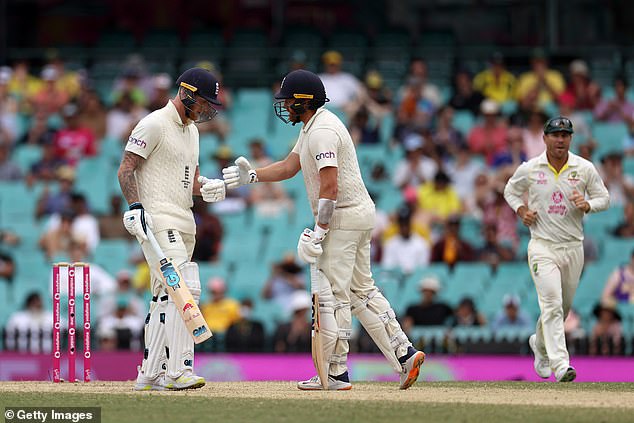 It all seemed down to Bairstow.

Next over, Smith missed a tough chance at second slip off Starc – Australia’s sixth drop of the match. But, with just 11 overs left, they were celebrating again, as Bairstow was caught at silly point by Labuschagne via a thick edge on to his pad.

Scores of 113 and 41 in this Test have prolonged his career, though his participation in the series finale in Tasmania may depend on what the medics have to say about his injured thumb.

His dismissal left Leach and Broad needing to survive 64 balls for the draw. Leach took them most of the way – and Broad, with the help of his old buddy Anderson, finished the job.