Elise Christie, the triple world champion speed skater, has discussed her experiences of self-harming in the hope that she can help others come out the other side and turn things around.

The Olympian sat down with Rob Jones for a powerful Check In interview and spoke openly and honestly about her mental health and her darkest moments.

Christie says she is talking for the benefit of others; she wants people to hear her background and experiences so they can see that there is a positive pathway forwards.

“It’s been challenging since PyeongChang [in 2018], but I’ve definitely come out the other side of it now, in every way,” says Christie.

The world is a tough place, especially when you’re trying to do something incredible. Unfortunately not everyone who works hard succeeds right away, and just because you give it your all it doesn’t mean that your dreams will come true. But it doesn’t mean you shouldn’t try. #1 pic.twitter.com/aNTxNoIuUF

“Not just in terms of my sport but as a person. I do feel like my attitude towards this next Games, and the way I build into it, is going to be very different to the past.”

As an elite performer, Christie’s life is played out in public. It’s something she’s had to get used to, and it’s framed the resilience that she needs not only to compete in a tough sport and to deal with the inevitable fallout on social media but to make her stronger as a person.

When Christie talks about “coming out the other side”, she is referring to moving away from an experience of self-harming.

“It took for me to get really bad to change things around. I never wanted that, and I don’t want that for other people.

“When it happened, I wasn’t really myself. I just, kind of had, like a bit of an out-of-body experience going through motions,” she said of the moment which was her lowest.

“I did it [self-harmed] and then I remember 30 seconds or a minute later, just thinking that I didn’t want to die and waking up thinking, ‘what the heck?’

“I just want to stop as many people as possible getting to that point, because I think there’s a very big difference between being suicidal and being a self-harmer,” Christie said.

“A very big difference. I think that some people who self-harm get to the point of nearly being as bad as that, because they just take it too far.

“I, at no point, wanted to die. I just felt like I was worthless and there was no point in me being here. I almost felt more, like I wanted to run away and just get away from everything.”

Christie’s route to that point stemmed, largely, from her experiences at the Winter Olympic Games. Crashes and disqualifications at Sochi 2014 resulted in the speed skater receiving death threats and horrific online abuse.

“After only a year of starting to win medals, I’d had a crash and I was getting death threats,” Christie said. “It was a massive shock. I would say that’s what started the real mental health problems.

“There probably were aspects that fed in from childhood too. I was quite a shy and anxious child, but I never would say that I was depressed at all. I was always happy and bubbly around people that I knew well. It really changed after Sochi.

“It just brought it back, I’d got away from bullying, and then there I was getting bullied again.

“This time it felt worse because it felt like the whole world was doing it; to get death threats when you’re not expecting to get any attention, is just such a shock.”

Within the bubble of the Olympic village, Christie stayed off social media and tried to put it to one side, something that wasn’t easy to do once she returned home.

“It got so bad that I didn’t want to leave the house in case someone tried to kill me,” she says. “When I was in social environments, I couldn’t speak. I couldn’t even listen to what people were saying because I was focused on trying to calm myself down.

“I completely changed in that way, and I’ve never really fully got back to how social I used to be.”

To the social media hypocrites that think they’re not affecting anyone, to the people that judge without knowing the whole story. To the people who are only sorry now because it’s too late. Let this be a lesson. Be entitled to your opinion on a situation yes, but stop acting like you understand something fully that you weren’t a part of. Stop destroying one another. I too experienced this years ago and recently in very different ways, lives are lost everyday to suicide, please think more, love more, don’t become someone’s tipping point. #carolineflack #RIP

To the social media hypocrites that think they’re not affecting anyone, to the people that judge without knowing the whole story. To the people who are only sorry now because it’s too late. Let this be a lesson. Be entitled to your opinion on a situation yes, but stop acting like you understand something fully that you weren’t a part of. Stop destroying one another. I too experienced this years ago and recently in very different ways, lives are lost everyday to suicide, please think more, love more, don’t become someone’s tipping point. #carolineflack #RIP

Despite the experiences in Sochi, Christie’s drive to achieve in her sport meant that she fixed her sights on PyeongChang 2018.

She tackled the 500m, 1000m and 1500m again. Alas, with the margins being so tight in short-track speed skating, history repeated itself with crashes and a disqualification. On top of that, a nasty ankle injury meant she had to take to the ice in significant pain.

“I remember thinking, ‘it’s not going to happen again is it? It can’t, surely not?’ I told myself to stop thinking like that: ‘it’s just a bit of bad luck’. Then it did.

“The first reaction to it [losing an Olympic dream again] was numbness. I didn’t want to think about it. At that point, there was so much media attention with things I was dealing with as well, I just dealt with that.

“Then, when everything settled down and I started self-harming because I couldn’t feel anything almost. I needed to feel something.” 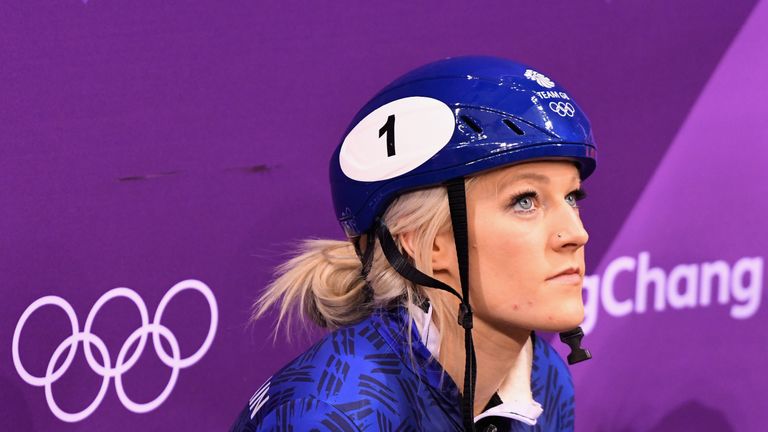 Christie does not shy away from sharing more about why she turned to self-harming. Again, she confronts it to try and help others to understand and help those around them, or help themselves.

“I’d heard about people doing this to themselves before and I couldn’t understand why they’d done it.

“Most of my self-harming happened when I was off medication [for depression], most of it. A couple of times not, but most of it happened off medication. If you get the help that you need, there are ways to avoid it happening. 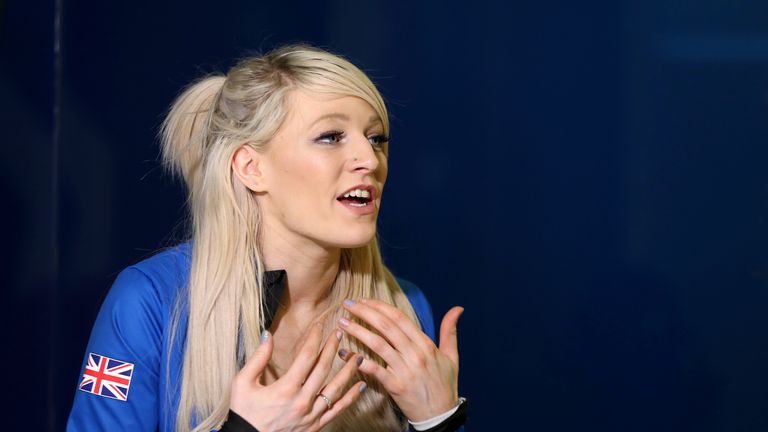 You get into a habit of using it as a way out, but I have found other things to do instead. I’ll go to sleep, eat some nice food, cook or I’ll clean, a lot of people say that they do a lot of cleaning.

“Once you find the right medication and the right person to speak to, and you understand why you feel the way that you do and how to manage that, the likelihood of it [self-harming] crossing your mind is slim.

“If someone sets me off now, then I know it’s not the right thing to do because it’s not going to fix the long-term problem.”

Not only has Christie learnt to deal with something as difficult as self-harming, she’s also learnt not to link her own self-worth to her skating.

“I think a lot of people have this, where their self-value comes from something of theirs, as simple as their hair or a car.

“They base everything on this one thing that’s still going okay in their life. For me the problem was, when I did have a bad day skating, I knew that it was going to set me off.

“I was sitting at a competition knowing that I knew it had to go well because if it didn’t, my self-value would be gone. That was difficult.

Interviewing for cowboy builders with @SkySports ….
In all seriousness, interviewing to share tips on how to cope when feeling low, and telling a little bit of my story, with some insight to what to expect from my coming autobiography 💥
.
.
.
.
.#takecareofyourmind pic.twitter.com/TQbBuGKkw7

“Last year I got sick and injured and I didn’t have skating to value myself on. I realised that I couldn’t just base my self-value around skating, just because I’m good at it.

“Life isn’t just about skating. That’s not because I’m not a dedicated athlete, it is about that medal and skating, but if I have a bad training session now I’m not going to come home and feel rubbish all day anymore.

“I’m now choosing to take my medication regularly and not come off of it and try and be the hero who got through it.

“I’m choosing to approach skating differently again, in the way that I used to. Enjoying it, writing down challenging goals and being proactive and the athlete that I want to be.”

The athlete Christie is, and wants to be, is one that’s going to be on the start line at her third consecutive Olympics in 2022. Despite everything she’s experienced at previous competitions, her sights are fixed on Beijing and she’s going to do it her way.

“Before, I was scared of challenges. Even though I was physically feeling good, I was so scared about feeling bad in myself.

“From September 2021 onward, I will not be on my own social media at all. That’s very different. I will not be looking at responses on there.

“One of my biggest ambitions about this Olympics is to show that, despite everything that happened, I still went out there andtried once more because there was no reason for me not to.

“There have been a lot of reasons that have made it hard but there’s no reason that I shouldn’t be there. It wouldn’t be right to show the example of giving up.

“I’m really ready for the next year-and-a-half and I believe that I can still go out and do this.