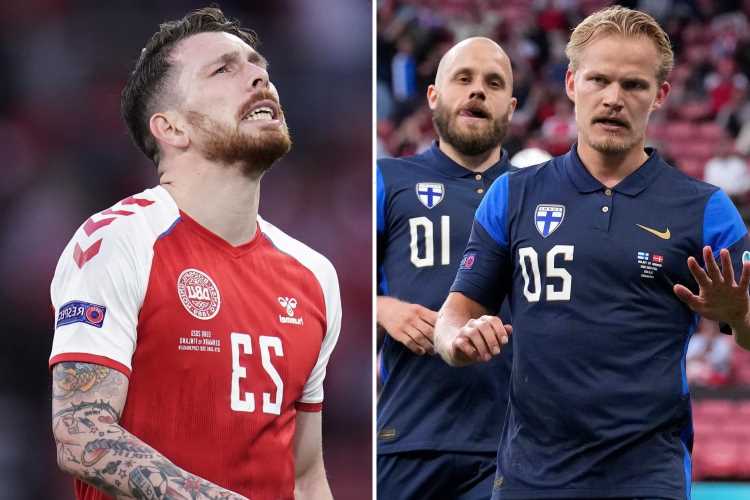 IN the end, Finland won the game — not that anybody really cared.

The result that mattered most was delivered in the emergency unit of Copenhagen’s Rigshospitalet. Christian Eriksen was alive. 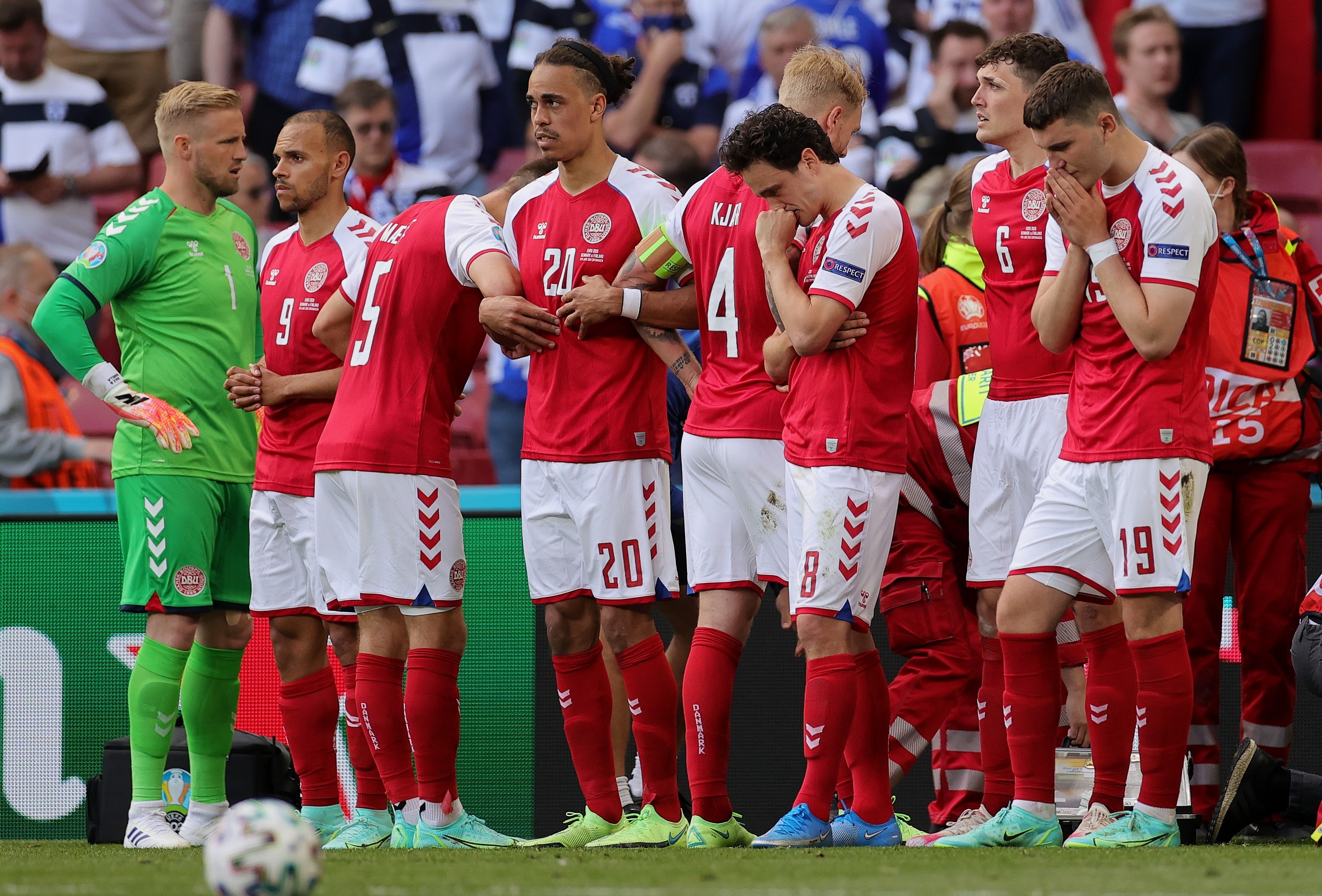 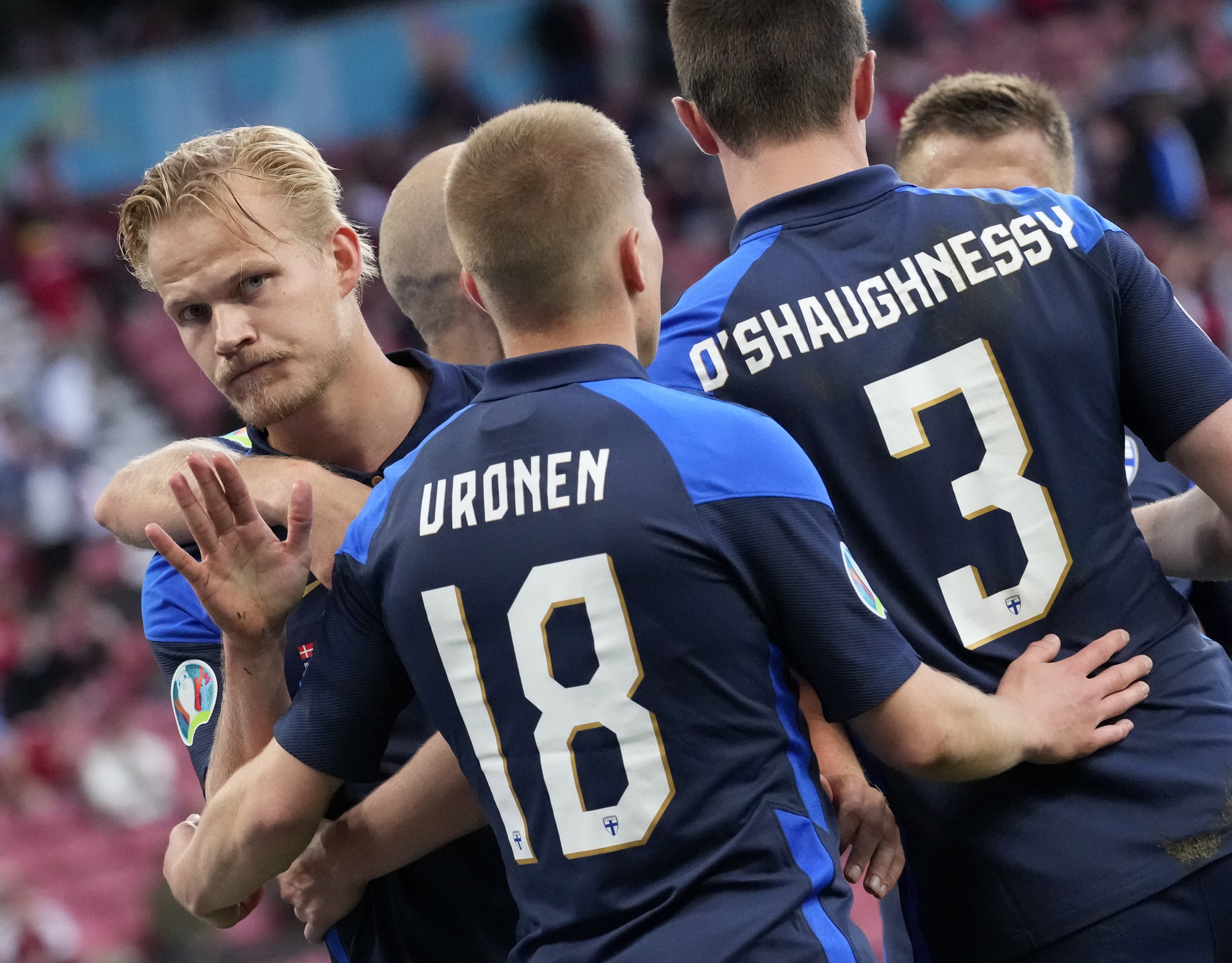 Cajoled into returning to the pitch by their talisman, Denmark summoned up reserves of character to play on having been plunged into the depths of despair little over 90 minutes before.

That Eriksen was fit enough to FaceTime his team-mates from his hospital bed to tell them to finish the match is remarkable.

For when the Inter Milan star tumbled to the ground with no one next to him three minutes before the break, everyone in the Parken Stadium in Copenhagen and millions watching around the world feared the very worst.

But then perhaps no one should really have doubted the character of the Danes to play on,  considering the heroic actions of their captain Simon Kjaer in the seconds after Eriksen had fallen to the grass.

Ref Anthony Taylor knew something was up and immediately, commendably urged the medics on to the pitch.

But Kjaer was not waiting around and his swift actions may well have saved the life of his team-mate.

The 32-year-old AC Milan defender dashed from his position and pushed aside other players to immediately place Eriksen into the recovery position, clearly unconscious.

Kjaer realised what was going on and worked to stop the 29-year-old from swallowing his tongue and then took the life-saving decision to start giving CPR on his stricken friend. 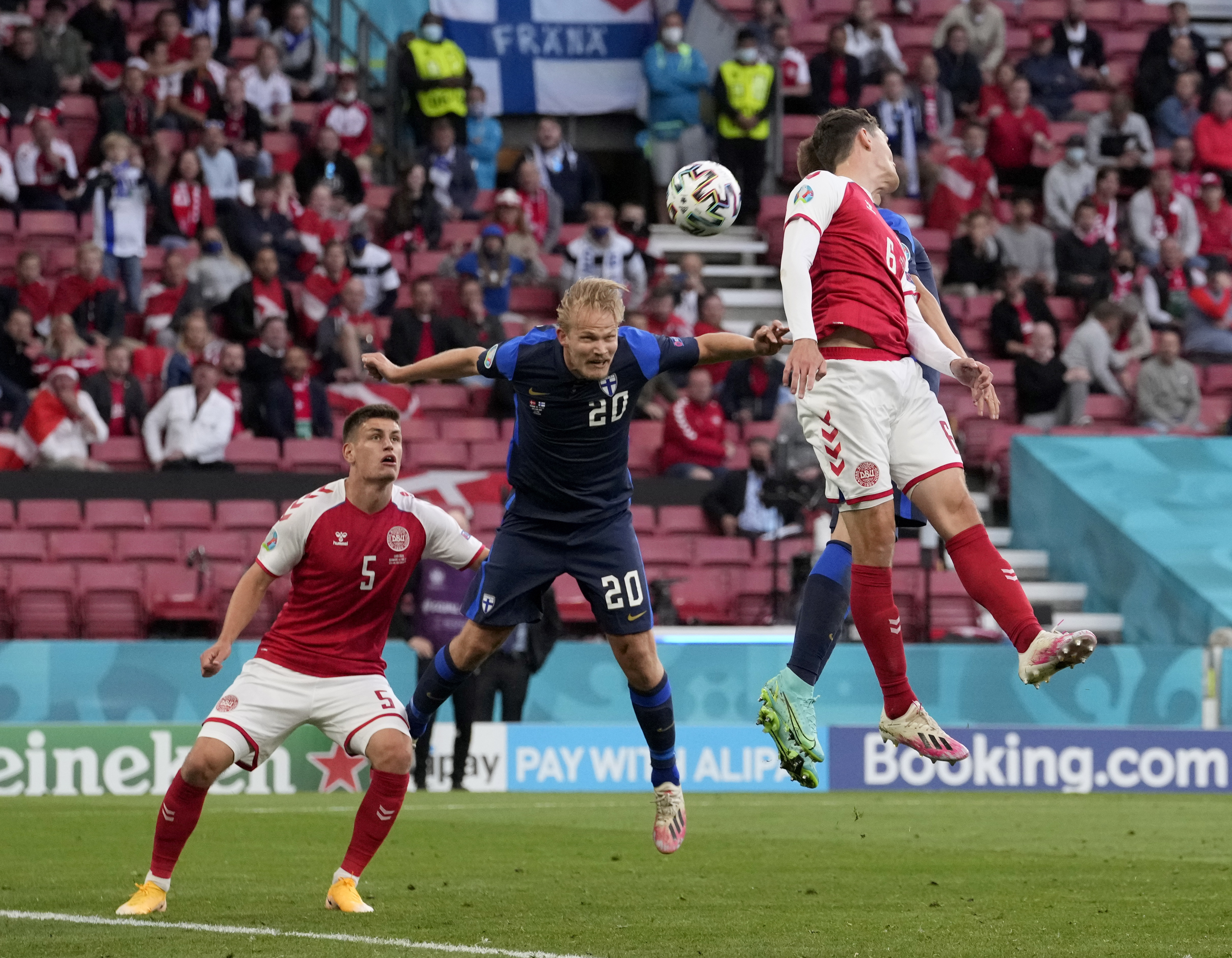 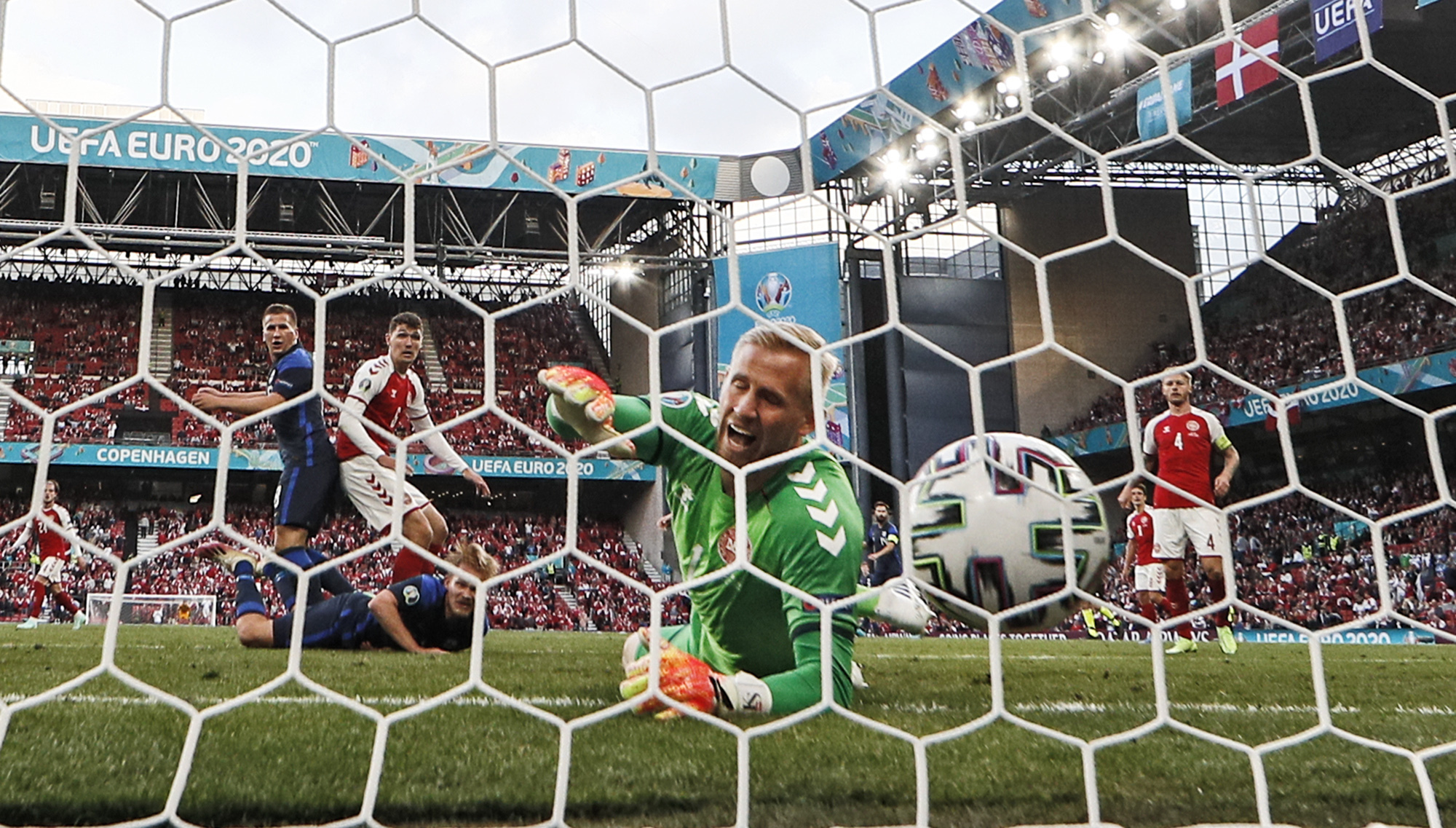 As the magnitude of what was unfolding began to hit home, players and fans burst into tears as they watched a footballer in a desperate battle for survival right in front of them.

Step forward Kjaer again, ordering the Danish team to form a ring around their team-mate to give him privacy in those frantic minutes when medics were using a defibrillator to shock his heart back into action.

Denmark’s response was remarkable as the players did their best for their pal, striker Martin Braithwaite saying prayers desperate for a successful outcome.

Midfielder Thomas Delaney was in tears while other team-mates covered their faces with their hands or their shirts.

And waiting on the opposite touchline, the Finland players were equally distressed.

The Finland players and match officials returned to the dressing rooms 11 minutes after Eriksen collapsed, while the Denmark players remained on the pitch as fabric screens were held up around the player and the medics treating him.

Kjaer and the ever impressive Kasper Schmeichel then raced across the pitch to console Eriksen’s distraught wife Sabrina as she raced down from her seat, sporting a shirt with her husband’s name on the back.

Schmeichel, and especially Kjaer, were magnificent. Calm, composed, decisive. What leaders are made of.

Even so, as Eriksen was carried away covered by flags for privacy, there was surely no way this match would be played to a conclusion.

At that stage the signs had not looked good — and around the world, the seriousness of the situation was starting to hit home.

In London, the England squad watched on in panic on their phones as the team coach made its way to their hotel in West London before today’s game against Croatia.

The FA had only just updated the media on plans for their pre-match press conference due to be held at 6.30pm.

Within five minutes, that had been cancelled as rightly, all thoughts turned to the health of a player many in the Three Lions squad know so well. 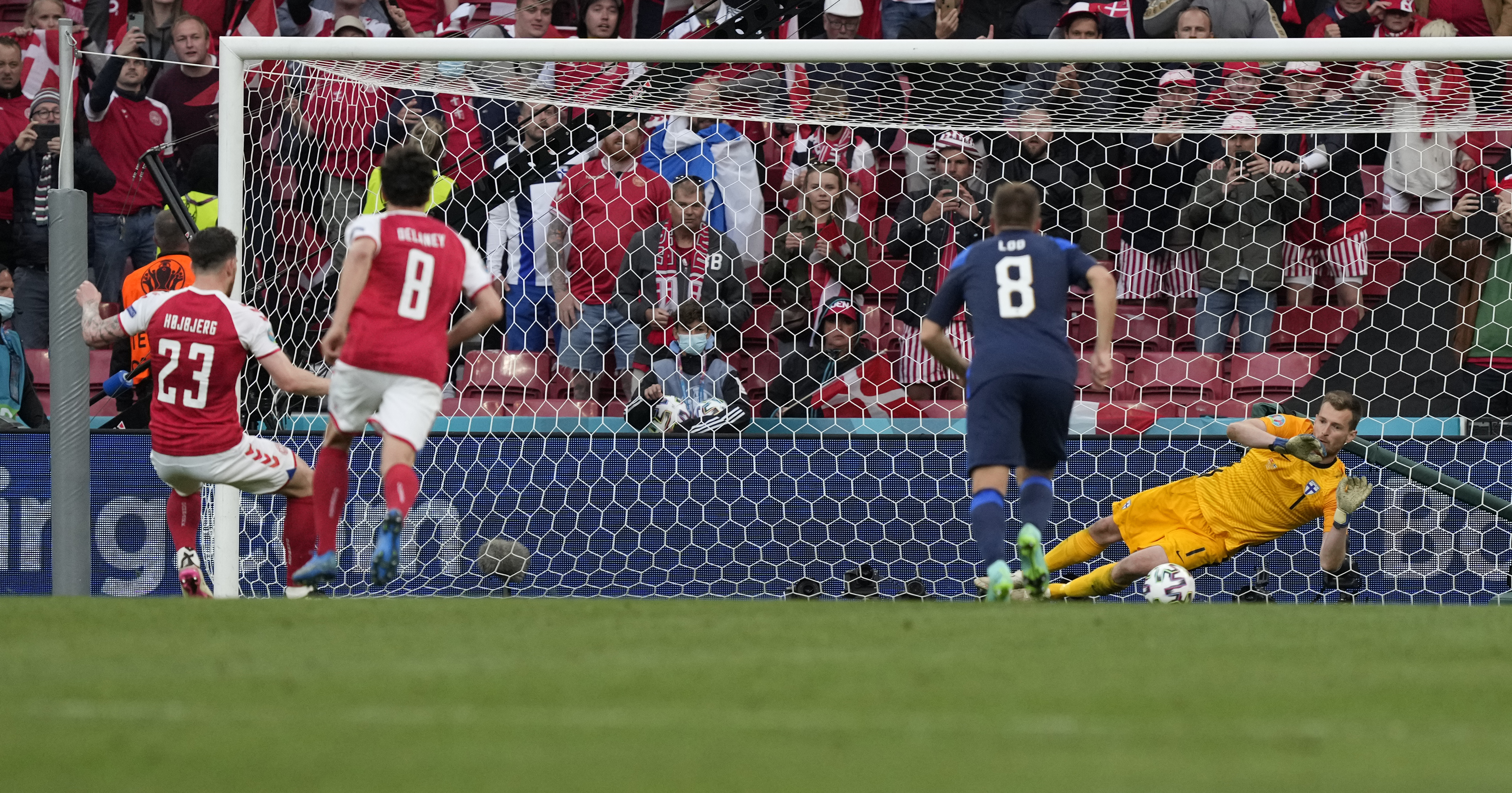 Then right as your stomach churned in the deepest fear and despair, came fleeting hope.

A single photo suddenly appeared online, apparently showing the player awake and breathing as he was leaving the field.

Behind the scenes, officials and players of both teams began to receive word that Eriksen was on the road to recovery — though it was too early to get carried away.

But with Sabrina and Eriksen’s father Thomas joining him at hospital, the news suddenly emerged that he was stabilised and indeed the prognosis was a positive one.

Then came the FaceTime call to the delight of his team-mates, instructing them to finish the match.

Together with the Finnish players the decision was taken. Game on.

In a spine-tingling moment, rival supporters united as the Finnish fans chanted “Christian” and the Danes followed up with “Eriksen”.

Opposition players cuddled each other just before the restart and English ref Taylor blew to resume the game.

Unsurprisingly, the final four minutes of the first half were flat. And though something of a competitive match developed after the break, there was still a shadow cast over events.

And perhaps what went before contributed to Schmeichel’s tame attempt to stop Joel Pohjanpalo’s header slipping through his grasp as Finland scored the winner on 59 minutes.

And just as cruel was seeing Tottenham’s Pierre-Emile Hojbjerg’s poor penalty saved with 18 minutes left, given those duties would have been left to Eriksen in normal circumstances.

Who could blame them?

A football game was played, points were won. But no one really cared.