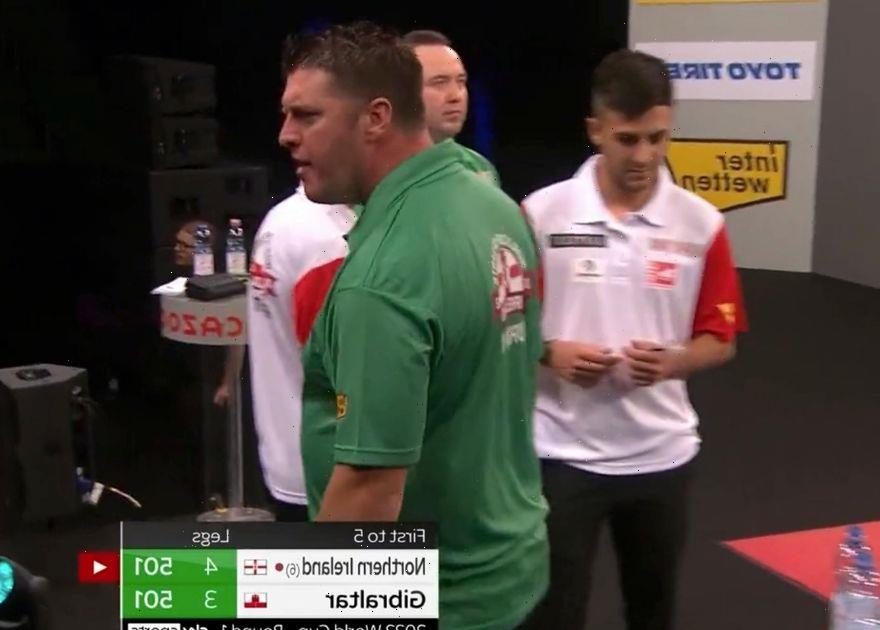 Daryl Gurney hit back at a raucous German crowd after Northern Ireland’s edgy victory over minnows Gibraltar at the World Cup of Darts in Germany.

The team of Gurney and Brendan Dolan were big favourites against the young Gibraltar duo of Justin Hewitt and Craig Galliano, who did their best to whip up the Frankfurt crowd and they certainly sided with the underdogs. At times, that support went too far as Gurney had to delay throwing due to screams from the crowd.

That clearly angered Gurney, but he seemed to use it as motivation and the Irish eventually progressed to round two with a 5-3 victory. After the final dart had been thrown by Dolan, Gurney celebrated angrily on the stage, roaring at the fans who had been taunting him. He also saved a kiss for referee Russ Bray, who had tried to restore order during the match.

Afterwards, a pumped-up Gurney admitted he was finding it difficult not to swear during his post-match interview with Sky Sports.

“I’ve been telling everyone, me and him are going to win it,” he declared. “Everybody going for Gibraltar, I’m trying not to curse right now.

“Brendan never gives himself justice, it takes two to make a team. Who took out the first two legs? It takes two men to win this tournament. I’ve got one of the best gentlemen, one of the best darts players in the world, if I can back him up we’re going to be hard to stick.”

Who are you tipping for the World Cup of Darts? Have your say in the comments section below.

“That man's been dedicated longer than I have. I’ve been doing it 24 years, you’ve been doing what, 144 years? But listen, if you offered me a singles tournament or the World Cup, I’d choose it with Brendan all day.”

Wales (Gerwyn Price and Jonny Clayton) are also through to round two, which takes place on Saturday, after seeing off a spirited challenge from the Philippines. England (Michael Smith and James Wade) begin their campaign against the Czech Republic on Friday.