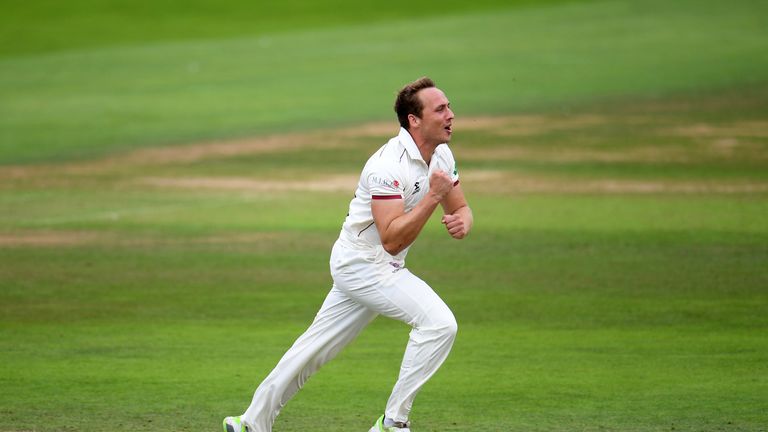 Josh Davey’s five-wicket haul led Somerset to a crushing 298-run victory over Yorkshire to propel them to the top the Specsavers County Championship Division One table.

The visitors lost 6-56 – their second batting collapse of the match – which began when Roelof van der Merwe bowled Harry Brook (10) before before Dom Bess ran our Tim Bresnan for 17. Somerset vs Yorkshire scorecard

Davey then returned to the attack and took the final four wickets of Yorkshire’s innings, with Tom Kohler-Cadmore (11) edging the seamer to first slip and he trapped Keshav Mahraj lbw three balls later for a duck.

A fine caught-and-bowled saw the back of Will Fraine (5) and Duanne Olivier was only able to skew Davey to Bess’ hands running towards point with Yorkshire ended on 127 all out as Ben Coad was unable to bat through sickness.

Somerset had set Yorkshire an unlikely target of 426 to win the match earlier in the day as Lewis Gregory’s 39 and Van der Merwe’s brisk 30 helped them to finish on 329 all out.

In Division Two, Lancashire were promoted back to the top flight courtesy of an innings-and-45-run success over Derbyshire at Old Trafford. Lancashire vs Derbyshire scorecard

Derbyshire were skittled for 129 as Tom Bailey, Glenn Maxwell and Matthew Parkinson took three wickets apiece, after Josh Bohannon’s 174 and 51 from captain Dane Vilas lifted the Red Rose to 418.

Meanwhile, Division One title-chasers Essex are struggling to apply the pressure on Somerset against Warwickshire at Edgbaston, where Tom Westley kept them afloat with an unbeaten century. Warwickshire vs Essex scorecard

The right-hander’s 123 led his side to 278-6, still 239 runs behind, with Warwickshire needing a draw to secure safety and relegate Nottinghamshire to Division Two.

The visitors were all out for 259, having added 23 to their overnight total, to set Nottinghamshire 440 to win. But they were skittled for 212 despite a half-century from Ravichandran Ashwin, with Stevens taking 5-53 from 18.2 overs.

Part-time spinner Felix Organ bowled Hampshire to a 272-run triumph over Surrey at the Ageas Bowl. Hampshire vs Surrey scorecard

Brought into the attack after bad light forced home skipper James Vince into deploying slow bowling only, the 20-year-old hurried Surrey out for 151 with 5-25 in eight overs.

Hampshire had earlier set a victory target of 424 after Liam Dawson and Lewis McManus, with 88 and 61 respectively, had lifted their side to a second-innings 436. An exceptional 28-ball spell from Brydon Carse, in which he picked up 5-11, saw Durham pick up a nervy 44-run win over Middlesex at Lord’s as they hunt one of the final two Division Two promotion places. Middlesex vs Durham scorecard

The hosts resumed on 21-0 with a target of 196 but lost opener Nick Gubbins 16 balls into the day as he was caught in the slips off Carse before Chris Rushworth trapped Stevie Eskinazi lbw for a three-ball duck.

Captain Dawid Malan made just two before being trapped plumb in front by Ben Raine but opener Sam Robson and Max Holden steadies the ship with a 54-run fourth-wicket partnership.

However, Raine removed Holden lbw for nine and Robson then edged Rushworth behind for 65 before Carse strode to the fore.The 24-year-old began with a maiden and next over had George Scott caught behind for 14 before he bowled John Simpson (14), James Harris (0), Miguel Cummins (1) and Tim Muragth (8) as Middlesex collapsed to 151 all out.

Sussex are likely to be back in the mix after reducing Gloucestershire to 197-6 in their second innings at Bristol, a lead of just 27. Gloucestershire vs Sussex scorecard

Northamptonshire will resume on 22 without loss after Leicestershire managed only 189 second time around despite 60 from Colin Ackermann.