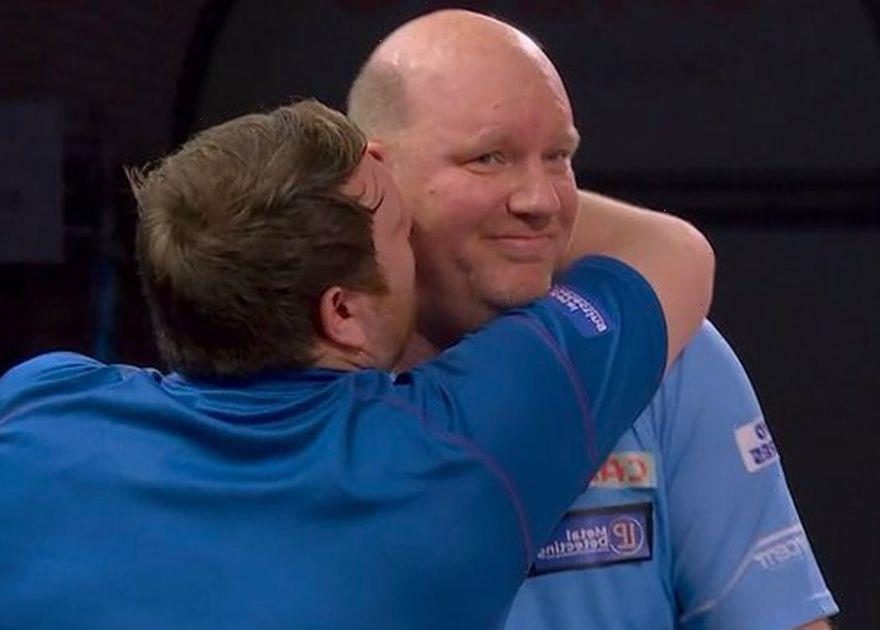 Vincent van der Voort secured a place in the third round, plus a rather uncomfortable hug with Cameron Menzies, with his victory over the Scot at the World Darts Championship.

Van der Voort averaged almost 105 to clinch the opening set in style, and after taking out a crucial 121 finish en route to a 2-0 lead, he took advantage of Menzies’ double trouble to seal a straight-sets win.

After the match, as usual, the players shook hands but Menzies, the partner of Fallon Sherrock, wanted more and appeared to plead with the Dutchman to give him a hug. Van der Voort reluctantly obliged but pulled away as soon as he could amid awkward scenes.

“Love how uncomfortable Vincent was getting hugged and kissed,” tweeted one fan. Another said: “Van Der Voort’s reaction to the hug will be one a meme I feel.”

Another fan pondered: “Never understand why darts players shake and hug at the end of the match, shake hands with the officials and then hug each other again and again.”

What do you think about Cameron Menzies' antics? Tell us in the comments section below.

Menzies’ antics on stage, berating himself and even hitting himself on the head, have attracted attention at the tournament.

One fan feels it may have been his undoing, saying: “Menzies is a character on stage, I do like him. But his temperament can really let him down. Van Der Voort was on a mission tonight, a total and utter demolition job from start to finish. Even though set 3 wasn’t great to watch!”

Addressing the hug, Van der Voort told reporters: “I gave him a hand, he wanted a hug, I said no, but he really wanted to. As friendly as I am, I gave him a little one.”