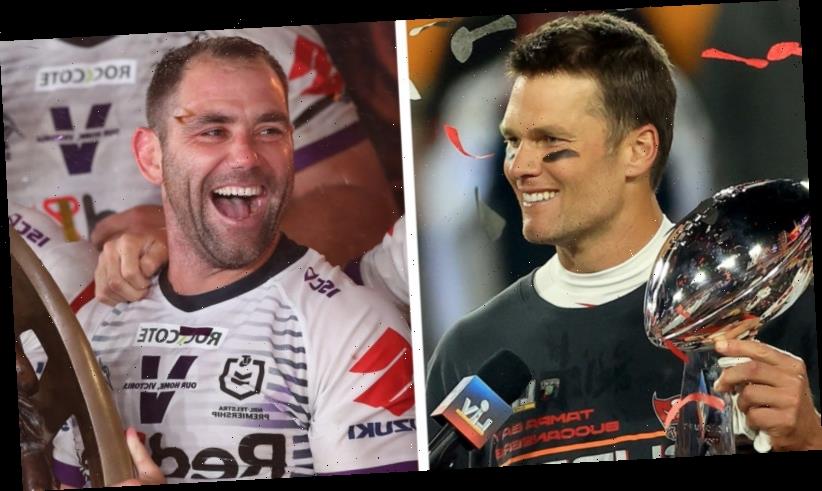 The comparisons between Cameron Smith and Tom Brady are obvious. Both have some claim to being GOATS, and both have broken records for longevity, with Smith now finally hanging up the boots at the age of 37, while Tom Brady is still going strong with the Super Bowl winners, the Tampa Bay Buccaneers at the age of 43, and will start next season aged 44. Both men had a couple of decades association with a particular coach whose fame and prestige grew in tandem – Smith with Craig Bellamy, and Brady with the Patriots’s Bill Belichick. 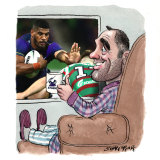 Despite Brady’s greatness there were always those who said it was built on Belichick’s genius as coach and that view held sway right up until this year when, in his first year with the Buccaneers they won the Super Bowl for the first time in two decades, while the Patriots with Belichick, but without Brady, barely won a toss.

And here is where I suspect Brady and Smith will part company.

For you had to see the Storm on Thursday evening against Souths to believe it. Even without Cameron Smith, in the first 25 minutes they looked like men against boys, as strong as ever. Yes, Souths came back, but it still looked very much like a Bellamy coached team: slick, fast, furious … and victorious. 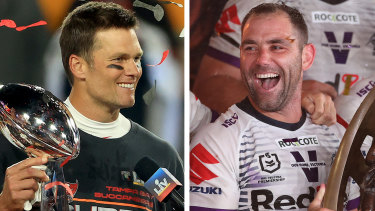 A work in process

See if you can spot the differences.

Here is Peter V’landys on the idea of providing an exception to the 18-year-old rule for Joseph Suaalii:

And here is V’landys on the idea of making Cameron Smith an Immortal, straight off the bat.

“I’ve never been a man for a process but in this instance you’ve got to follow the process. We had an advisory committee there last Friday with some of the most seasoned journalists and we discussed this Immortal and Hall of Fame … they believe we should follow that process … I can understand that so we probably will wait and just make sure the process is followed.”

Pens down. Who has spotted the difference?

It is this: on the comparatively trivial matter of just when Cameron Smith becomes an Immortal – now, or a few years from now – Mr V’landys recognises that the process must be followed.

But on the issue of a rule brought in specifically because of shocking problems that emerged when young league players were pushed too far, too fast, including five of them dying very young, it is: “We should not have blanket rules”.

Might I suggest that, in this instance, the priorities are wrong?

Bravo, rugby league. As revealed by Adam Pengilly in the Herald yesterday, from this season on, “any grassroots rugby league player diagnosed with concussion will be forced to sit on the sidelines the following week and need a clearance from a doctor before playing again under a major shake-up of the sport’s head injury protocols.”

It is a sign that the NRL is at last getting serious, but as ever the test will be what kind of a gap there is between the protocols, and what actually happens.

Which brings me to my point. Here is a quick word of advice I offer to all you NRL players directly, and it equally applies to AFL players and rugby union players, and indeed all those sports people for whom the risk of serious concussion is a part of your profession. Should some of you ever find it necessary to sue your sport for lack of care, you need to understand now, the legal power of what is called “contemporaneous notes,” – essentially notes taken of conversations at the time they were said.

Thus, if a coach or trainer says to you “Don’t tell anyone you were concussed, because we need you back out there/back next Saturday,” you need to write your account of that conversation as soon as possible after the event – even texting it to a friend. It will have much more value as evidence than merely your memory of what occurred, 20 years from now. Better still will be witnesses to the same conversation who can take their own contemporaneous notes. And don’t talk to me about being “a dobber”. This is serious, and there is nothing more serious than your brain health. Most importantly, if all administrators, coaches and official know that players are taking contemporaneous notes of conversations about concussions, the gap between protocol and practice will shrink to nothing. Your brain health will be more assured, and the football employers less likely to be sued to oblivion in 20 years time. Winner, winner, chicken dinner.

Where is Kamahl when you need him? For, why are people so unkind? The unlikely character of world champion surfer Kelly Slater weighed in on the Meghan/Harry/Oprah interview this week, taking surprisingly savage aim.

“I’d be mad too,” he said, “if I was James Hewitt’s unacknowledged, illegitimate kid, got essentially kidnapped and held hostage by the royal family, was forced to pretend that boring, square Prince Charles was my dad all those years, then they cut off my trust fund, and disapproved of my hot, American wife cause it didn’t fit into their ongoing inbreeding program. Did I miss anything?”

Not much. But, unaccustomed as I am to defend the royal mob, the whole James Hewitt thing is an unkind furphy, as Princess Diana didn’t take up with that cad, that bounder, that WEAK-CHINNED SCOUNDREL until two years after Harry was born. Got it? I am glad we have that sorted. Wars have been started over less.

Cold off the press

As if you didn’t know, at a match in Turin, the Portuguese soccer club Porto knocked the Italian club Juventus out of the Champions League this week … which I gather is a big deal. Strangely, however, the Zoom press-conference afterwards – for those interested in talking to Porto manager, Sergio Conceicao – did not go as planned.

Press officer: “OK. Good evening for all of you following us through Zoom. Any questions?”

Press officer: “For those of you following through Zoom, I would like you to pose your questions. I can’t see any requests now.”

Cameron Smith on hanging up the boots, does one more bit of wrestling for the road: “So I couldn’t ask for more than finishing with the club that I played with for my whole career. I was wrestling with the idea for quite some time and that’s why it took so long. I had to wrestle with that decision because that’s what made it most difficult.”

Former Prime Minister John Howard in a video released this week by Macquarie Uni on the subject of CTE in sport. “Sport is part of who we are as Australians – it’s part of our national ‘cement’. The concern about concussion is not borne out of hostility to sport. It’s actually borne out of a desire to make the playing of sport as safe as possible.” The likes of Nick Farr-Jones, Steve Roach, Jeff Fenech and Alan Jones also feature on the video being released by Macquarie Uni next Monday on day one of Brain Awareness week, before they host an online seminar on Tuesday on Family Impacts of Repetitive Brain Trauma.

Roger Federer on his (winning) return from injury: “It feels good to be back. I’m happy to be standing here regardless of if I won or lost. But obviously winning feels better.”

Bulldog Adam Elliott’s text to former team-mate Michael Lichaa on Valentine’s Day: “Let get magget.” They did, but it finished with Elliott kissing Lichaa’s fiancee, and that’s where the trouble started … Just another day, and night, in the wonderful world of the NRL.

Waratah Will Harrison may be a tad optimistic: “We have had a lot of players leave over the last couple of years but we feel we have the talent to be a championship-winning side.”

Jackson Hastings on why he wants to come back to the NRL: “I’d love to come back and change people’s perception of me, everyone knows what note I left on. I want people to know the real Jackson Hastings, not the person they saw four or five years ago.” Jackson? If it is any help, I don’t remember you, or the note you left on. But good luck.

Brendan Fevola on his gambling woes: “I was in Queensland and it was a Wednesday afternoon and I had a bookie so I had $2000 credit in my account and I was having a really good day. By 3am the next morning I was betting at Hong Kong, not knowing anything about the horses, just having a little bit of fun. I ended that morning $363,000 in front . . . So I rang the bookie the next day to try and get it out but when you’ve got a bookie you can’t get it out until the Monday. So Sunday night I was $20,000 down. So I lost $360,000 in three days.”

Serena Williams, in support of the Duchess of Sussex: “Meghan Markle, my selfless friend, lives her life – and leads by example – with empathy and compassion. She teaches me every day what it means to be truly noble. Her words illustrate the pain and cruelty she’s experienced. I know first hand the sexism and racism institutions and the media use to vilify women and people of colour to minimise us, to break us down and demonise us. We must recognise our obligation to decry malicious, unfounded gossip and tabloid journalism.”

Justin Langer on missing out on the World Test championship final due to being docked points for slow over rate: “It wasn’t until after the game that we realised our over rate was down … I spoke to Painey [skipper Tim Paine] and Dene Hills, our analyst, about it. I was a bit grumpy about it and I thought ‘imagine if this cost us the World Test Championship’.” From an enormous distance, this seems highly unprofessional? Whose gig was it to keep track? How did they blow it?

Team of the Week

Cameron Smith. Retires after 19 years and 430 NRL matches. As well as 42 State of Origin appearances and 56 Tests for Australia. The retirement announcement came in a very Smith way – about 36 hours before the opening whistle of the first match of the season.

Central Coast Mariners. Having quite the resurgence!

Novak Djokovic. Has now spent 311 weeks as world No.1, one more than Roger Federer.

Erling Braut Haaland. If you don’t know who the Norwegian wunderkind is – I know I don’t – you will when he becomes a household name, as I am reliably told he will.