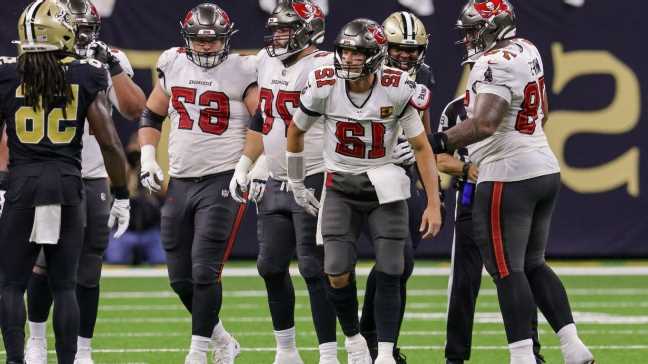 After an exciting Sunday of action, we have one more opportunity this week to wager on professional football. So which plays do our analysts like the most?

Tom Brady and the Buccaneers host Alvin Kamara and the Saints in a pivotal NFC South matchup. The Buccaneers enter Monday night as favorites to win this game and are also currently -430 to win the division. What are your thoughts on this matchup and the NFC South race?

Kezirian: I like the Saints to continue to give Tom Brady problems. The Bucs won the Week 2 meeting but it was a 3-3 game in the fourth quarter and the outcome came down to a couple plays. Prior to this season, the Saints had won all four regular season meetings, since Brady left New England. I like New Orleans and the points, and I also lean to the under. Dennis Allen has figured out a way to keep Brady in check. The proof is right in front of us with these results.

Schatz: At -430, it’s slightly too rich for me to take the Buccaneers to win the division, but I’ll happily take Tampa Bay -3.5 in this game. Tampa Bay has been better than its record and currently ranks 10th in DVOA. The defense is seventh and even the pass offense is still 10th. Tampa Bay’s big issues have been luck and the running game. Compare the Buccaneers to the Saints, who are 25th overall with an average defense and both a poor offense and special teams. Especially considering that offense is more predictive than defense, I’m going with Tampa Bay on Monday night.

Snellings: I’ll give the points and take the Bucs. Not because I have confidence in their current level of play…I don’t…but because the Saints insist on starting Andy Dalton. I like Dalton, and followed his early career closely, and it seems clear to me that a) he’s no longer in his prime, and b) even in his prime there was a ceiling on his capabilities. With Dalton firmly in the traveling backup stage of his career, for the Saints to keep starting him makes me feel like they aren’t serious about competing for the division So, I’m expecting the Bucs to win on Monday, and likely win the division as well…but at -430, I don’t see any profit in the division bet.

The Saints have found success limiting Brady in the past matchups between these two teams. Brady’s passing props for Monday night are 272.5 yards and 1.5 touchdowns. Do you see Brady having a big night against the Saints or will New Orleans slow him down once again?

Kezirian: I think the Bucs will continue to present problems for Brady. If I had to play his passing prop, I would take under 272.5. He’s amazing but the Saints have been a recent riddle he’s been unable to solve.

Schatz: I’m not sure this is the same New Orleans defense that has done such a good job holding back Brady in recent years. There are a lot of injuries. If I were a Saints fan I would be particularly worried about Marshon Lattimore, who has such a great history of slowing down Mike Evans, but also hasn’t played since Week 5. Without Lattimore, I think Tampa Bay can definitely throw on the Saints — and they’ll need to because that running game has been so problematic.

Snellings: Like Schatz, I don’t believe these are the same Saints. With that said, 272.5 is a fairly high number for Brady in a game that the Bucs should be playing from ahead. So, I’ll take the under on the yards, and stay away from the touchdown bet.

Rookie wide receiver Chris Olave has been one of the bright spots for New Orleans this season. He currently leads all Saints receivers with 56 receptions and 822 yards on 92 targets. Olave has the second-best odds to win Offensive Rookie of the Year (+550) and his receiving prop for Monday night is 56.5 yards. Do you see Olave having a big game against the Tampa Bay secondary, and can he pass Kenneth Walker III in the rookie race?

Walder: Yes, and yes. First, I’ll lean toward Olave getting over 60.5 yards here. My model is right in line with that number, but I still like the over because that’s not incorporating our receiver tracking metrics, where Olave shines. Seriously! He ranks sixth in overall score among all receivers and tight ends, trailing only A.J. Brown, Stefon Diggs, Tyreek Hill, Tyler Lockett and Justin Jefferson. That’s it. Get this man a quarterback! And that’s also why I think he’s a great value for OROY. He’s already three times the player Walker is and would easily be my vote if I had one. I’m surprised he’s not the favorite.

Snellings: I agree with Seth, and will go Olave over 56.5 receiving yards. He’s topped that mark in seven of the last nine games in which he’s finished the game, and was well on his way to that mark with 54 yards when he got injured in the 3rd quarter of what would’ve made it eight of nine. I also see Olave as clearly the best offensive player in this class this season, but the Seahawks could compete for the playoffs while the Saints look poised to stay home, so I can see why he’s not favored. But yes, I do believe he can pass Walker with a big finish down the stretch.

Is there anything else you like or are playing in this matchup?

Moody: Tom Brady under 271.5 passing yards. Brady has only averaged 245.5 passing yards per game against the Saints since he’s been under center for the Buccaneers with a completion percentage of 59.7%. This season, he has thrown for 271 or more passing yards in only six games. With 190.3 passing yards allowed per game over the last three games, the Saints’ defense has played well. New Orleans could also have Marshon Lattimore back for this game. The under is the best bet when it comes to Brady’s passing yards.