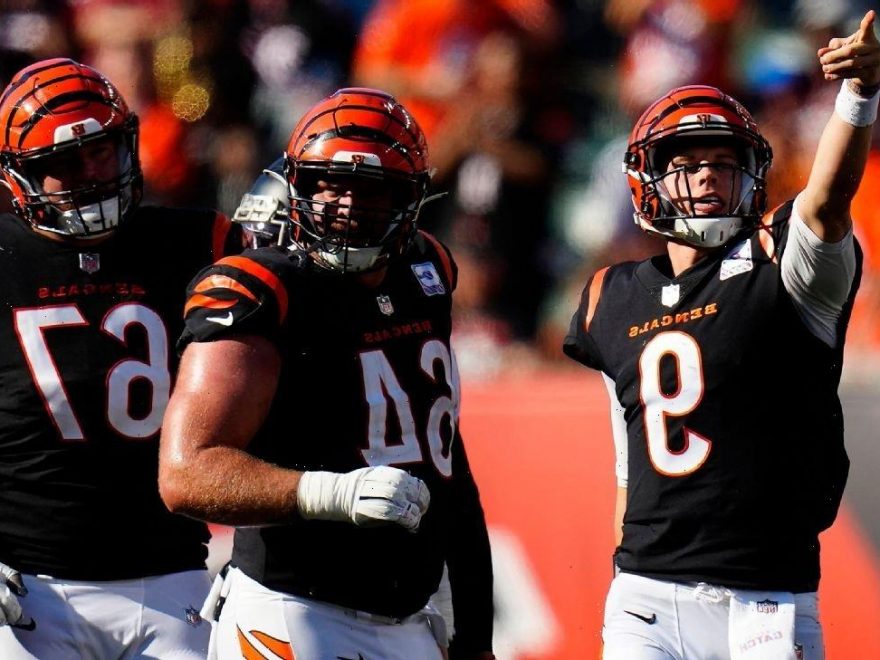 Week 8 of the NFL season wraps up Monday night with the Cleveland Browns hosting the Cincinnati Bengals (-3, 45) at FirstEnergy Stadium (ESPN, 8:15 ET).

After an exciting Sunday of action, we have one more opportunity to wager on professional football. So which plays do our analysts like the most?

The Bengals have won four of their past five games after starting 0-2. However, the Browns have won the last four games against Cincinnati — and seven of the past eight games. The Bengals will also be without star wide receiver Ja’Marr Chase who re-aggravated a hip injury last week. Who are you taking?

Schatz: My favorite play on this game is to go under 45. I think the line is pretty good, considering that the Bengals are the better team (sixth in overall DVOA with Cleveland ranked 15th) but are missing Chase. Their defense has been surprisingly strong this year (also sixth in DVOA), which is a big reason for going under. So is their pace, as the Bengals are one of the league’s slower teams on offense. I also have a hard time believing in Cleveland’s offense long term, since Jacoby Brissett currently has a career-high QBR (as a starter).

Walder: One of the changes we made to FPI this offseason is to allow to adjust for non-QB injuries. That’s crucial in this case, because the loss of Chase is significant to any Bengals forecast. But in this case, the model still favors the Bengals against the spread, even without their star wideout. FPI makes Cincinnati 5.6-point favorites, instead of the three they are laying at Caesars. These two teams have been similar offensively, ranking 8th and 9th in offensive efficiency. However, their defenses set them wildly apart as the Bengals have a top-10 defense, but Cleveland can’t stop anyone (and ranks 30th in defensive efficiency).

Snellings: I’ll take the Bengals and give the points. It’s tough, because this is a divisional matchup and the Browns have owned this series for the past couple of seasons. Still, even without Chase, Joe Burrow has settled into a zone of late and he still has two elite wideout options. Plus, the Bengals defense has been deadly this season, particularly in the second half. They should help to pull this game out.

Burrow is coming off his first career 400-yard passing game and his Monday night props are set at 266.5 passing yards and 1.5 passing TDs. Is Burrow due for another big game against a Browns defense allowing 26.6 points per game? Do you think he will finish the season with the most passing yards (+800)?

Schatz: Burrow is currently ranked third in passing yards, so I think +800 is a good value on him to win the passing yards title. The Bengals have one of the league’s hardest remaining schedules, but that’s primarily because of the offenses they have left to play, not the defenses. For this game, our projections at Football Outsiders come very close to that yardage total and a little over the touchdown total, but I don’t think the over 1.5 touchdowns is worth playing with the current odds (-151).

Moody: Even without Chase, Burrow should be able to have a good game. I’d bet the over on passing yards. In his career, Burrow has averaged 334.7 passing yards per game against the Browns. He may also finish this season with the most passing yards. The Bengals will not place Chase on IR, which suggests he will return at some point sooner than expected. Before the Week 10 bye, Cincinnati faces the Browns and Panthers, both very favorable matchups for Burrow. To close out the season, the Bengals face the Steelers, Titans, Chiefs, Browns, Buccaneers, Patriots, Bills and Ravens. Almost all of these matches are favorable to Burrow. I’d bet on him to win the passing yards title at those odds.

Chubb has been one of the lone bright spots for the Browns, and he currently leads the league in rushing yards (740). Chubb has rushed for more than 90 yards in four of his past five games. Do you see him going over his rushing prop (83.5 yards), or will game flow impact his numbers and lead the Browns to pass more on Monday night?

Moody: The running game is central to the Browns’ offensive identity, and I don’t see them shying away from it against the Bengals. There is a strong chance Chubb (5.9 YPA, 7th in the league) will go over 83.5 rushing yards. During his last five games, Chubb has averaged 17.4 rushing attempts per game. For his career, he has averaged 94.6 rushing yards per game against the Bengals. In this matchup, the Browns offensive line has the advantage, so Chubb should exceed 100 yards.

Snellings: I’ll also take Chubb to go over 83.5 yards. The Bengals’ best run stopper, DJ Reader, remains on the injured list. Linebacker Logan Wilson has returned to practice — and his return should help — but without Reader, it will be difficult to keep Chubb from gaining this prop.

What is your best bet for Monday night’s game?

Schatz: I like Brissett over 0.5 interceptions (-111). This Bengals defense really has been playing well and, if the Browns are down in this game late, Brissett will be pressing. Three of his five picks this year have come while the Browns were losing by one score in the fourth quarter.

Moody: I’m going with Tyler Boyd over 5.5 receptions (+136). Over the past four games, Burrow has a QBR of 133.2 when targeting Boyd. Boyd has caught 19-of-24 targets over that span. He’ll continue to play an active role in the Bengals’ passing game with Chase out. In fact, against the Browns, Boyd will probably see close to double-digit targets.

Fortenbaugh: My pick is Joe Mixon over 65.5 rushing yards. I think we’re getting a good price here based on two factors. First, Mixon is averaging just 57.8 rushing yards per game and has surpassed this number only twice in seven contests this season, so his prop is a bit suppressed in my opinion. Second, Cleveland’s run defense has been brutal this year, ranking 21st in opponent yards per rushing attempt (4.7) and 27th in Football Outsiders’ rushing DVOA metric. In the last three weeks alone, the Browns have allowed Gus Edwards to rush for 66 yards, Rhamondre Stevenson for 76 yards and Austin Ekeler for 173 yards.

Walder: This isn’t a model play, but also give me Boyd over 5.5 receptions (+136). Boyd actually ranks ninth among qualifying WR and TEs in Overall Score in our Receiving Tracking Metrics, including an Open Score of 75 (tied for 13th-best). That says to me Boyd’s 155-yard offensive explosion last week was no fluke. He’s legitimately playing very well. Take Chase out of the equation and I think Burrow will look Boyd’s way Monday night.

Snellings: Let’s try Hayden Hurst to go over both 3.5 receptions and 37.5 yards receiving. Hurst has quietly become a primary option for Burrow, with 18 receptions for 149 yards and two touchdowns in his last four games. He has grabbed six receptions for at least 48 yards in two of his last three games and, with Chase out, Burrow should look for Hurst even more than usual.