A positive drug test from the 2012 London Olympics is set to strip six Australian swimmers of their medals for the first time in history.

Dual Olympian Brenton Rickard, part of the men’s 4 x 100 metre medley team that won bronze at the Games, has tested positive to banned diuretic Furosemide in a re-screening of the sample he gave eight years ago. 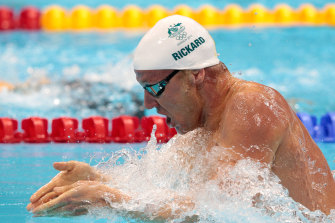 Brenton Rickard competes in one of the Olympic heats in London in 2012.Credit:Getty

The re-testing revealed traces of Furosemide, a masking agent, in what his lawyers say is an “exceedingly small concentration”.

Australia has never lost an Olympic medal through a drugs case.

Rickard, who says he is living his “worst nightmare”, emailed his teammates on Friday revealing the International Olympic Committee is seeking to disqualify his results from the London Games.

A devastated Rickard will fight the punishment in a Court of Arbitration for Sport hearing beginning on Monday in Lausanne, Switzerland on behalf of his teammates. He only swam the heat of the relay in London, not the final and says his fellow Dolphins should not be fall guys.

The result has emerged some eight years after the Olympics in question when Rickard’s sample – stored in a laboratory for that period – was re-screened. His A and B sample were consistent in the retesting.

The World Anti-Doping Agency extended the statute of limitations for violations from eight years to 10 years in 2015.

The 37-year-old former president of the Australian Swimmers Association is adamant he is innocent, and will argue that punishing his countrymen is disproportionate and unfair. 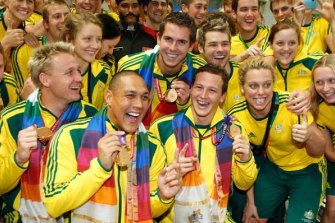 "Unfortunately for me though, I am not able to produce physical evidence eight years after the fact and the reality is that the precision of testing has become so good it has now exceeded the quality control measures for over-the-counter medications."

The court action was launched after the results of Rickard’s A and B re-screenings were consistent.

The Australian Olympic Committee is aware of the stunning case and proceedings.

"I am truly sorry to have to inform you of this shocking situation," Rickard wrote to his teammates.

"This outcome would be grossly unfair and disproportionate, particularly given I did not swim in the final. I also think it is not right for the Court of Arbitration for Sport to make a decision about this when you are not a party to the proceedings.

"I have always abhorred doping within the sport so you can imagine how sickened and horrified I am to find myself in this predicament. This is my worst nightmare."

Rickard, also a member of the national swim team’s leadership group until his retirement in 2013, helped Australia set the fourth fastest heat time in the Olympic relay on August 3, 2012.

The next day, after the interchange of two swimmers – Magnussen and Sprenger were brought in for the final instead of Rickard and D’Orsogna – Australia claimed bronze.

Should the IOC’s case be upheld, a quintet of British swimmers stand to win the bronze medals of the disqualified Australian swimmers, altering both Australian and British Olympic records and medal counts.