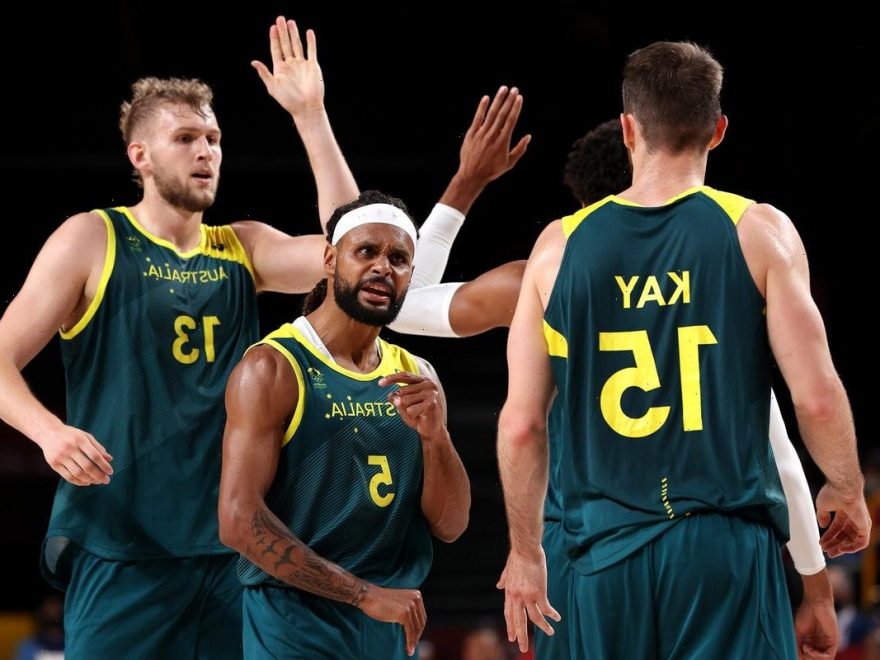 There were five minutes and 23 seconds remaining in the second quarter when Australia held a 15-point lead over the United States. The defending Olympic basketball champions had led for just 24 seconds in the first half, thanks solely down to Bam Adebayo’s tip-off at the beginning. As Team USA coach put it after the match, “they sliced us and diced us”.

Just 95 seconds into the third quarter, though, the lead had vanished. And by the conclusion of this men’s semi-final, it had more than flipped. At one point America’s domination swelled to 23, before settling down to 19 when the final buzzer sounded.

“We got to give credit to Australia,” said Kevin Durant, 23 points to his name, stretching further ahead as his country’s leading scorer in this competition. “They came out and hit us with a nice haymaker. But we was able to get back up and get that lead back.”

A final score of 97-78 confirmed Team USA as Olympic finalists in a campaign many feel has been too erratic. But they remain unbeaten, their slow burn over the last fortnight reflected in this, their best performance so far. They are on the cusp of going four-in-a-row for the first time since they strung together the first seven golds from basketball’s introduction in 1936 through to 1968.

“It’s rare that guys come in and do it four straight times,” says Durant, who has been around for the last two. “Especially after 2004.”

Then, in Athens, USA were nowhere to be seen at the final as Argentina triumphed over Italy. Ever since, a promise across the board was made to not take a gold medal for granted. The decision to throw in youngsters – eight of 2004’s 12 were 24 or under; six 22 or under – was scrapped. With the big guns back in the selection pool, they haven’t lost a match at the Olympics since. 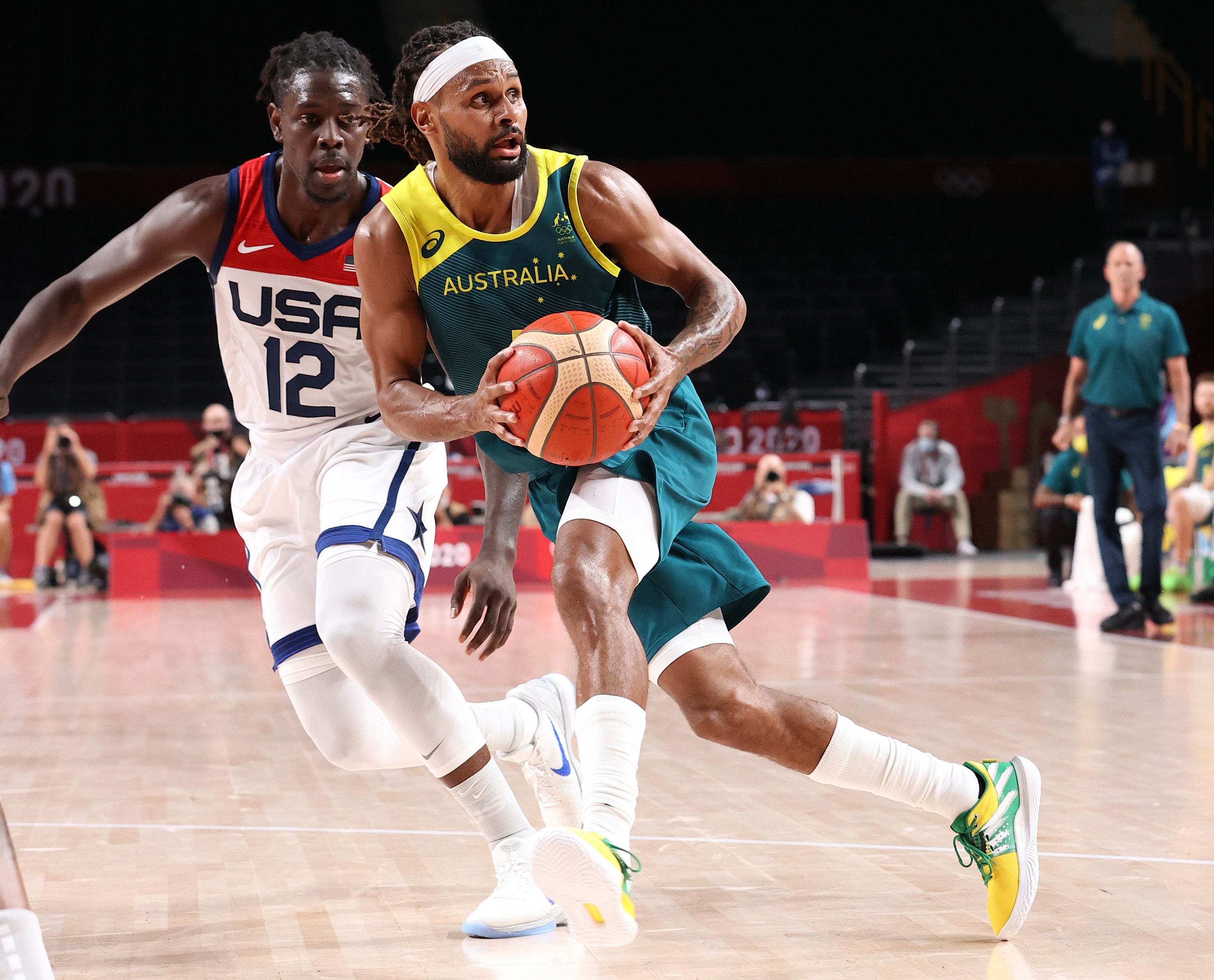 The bronze brought back from Athens pretty much worthless beyond being an inspiration to never see its like again. Even among fans. Carmelo Anthony gave his to a family member, who eventually sold it in 2014. Despite being the first modern basketball medal put up for auction, it only fetched just over £8,000.

Yet, as Australia dust themselves down after Thursday’s lunchtime defeat at the Saitama Super Arena, they will head into Saturday’s match playing for a bronze that will be priceless.

Having finished fourth in 1988, 1996, 2000 and 2016, 2021’s focus was no restricted to aiming for the last step on the podium. Gold was on the mind, reflected in a defensively robust and attacking efficient gameplan. The kind pundits in America were way of picking apart a team packed full of superstars but not enough system players. 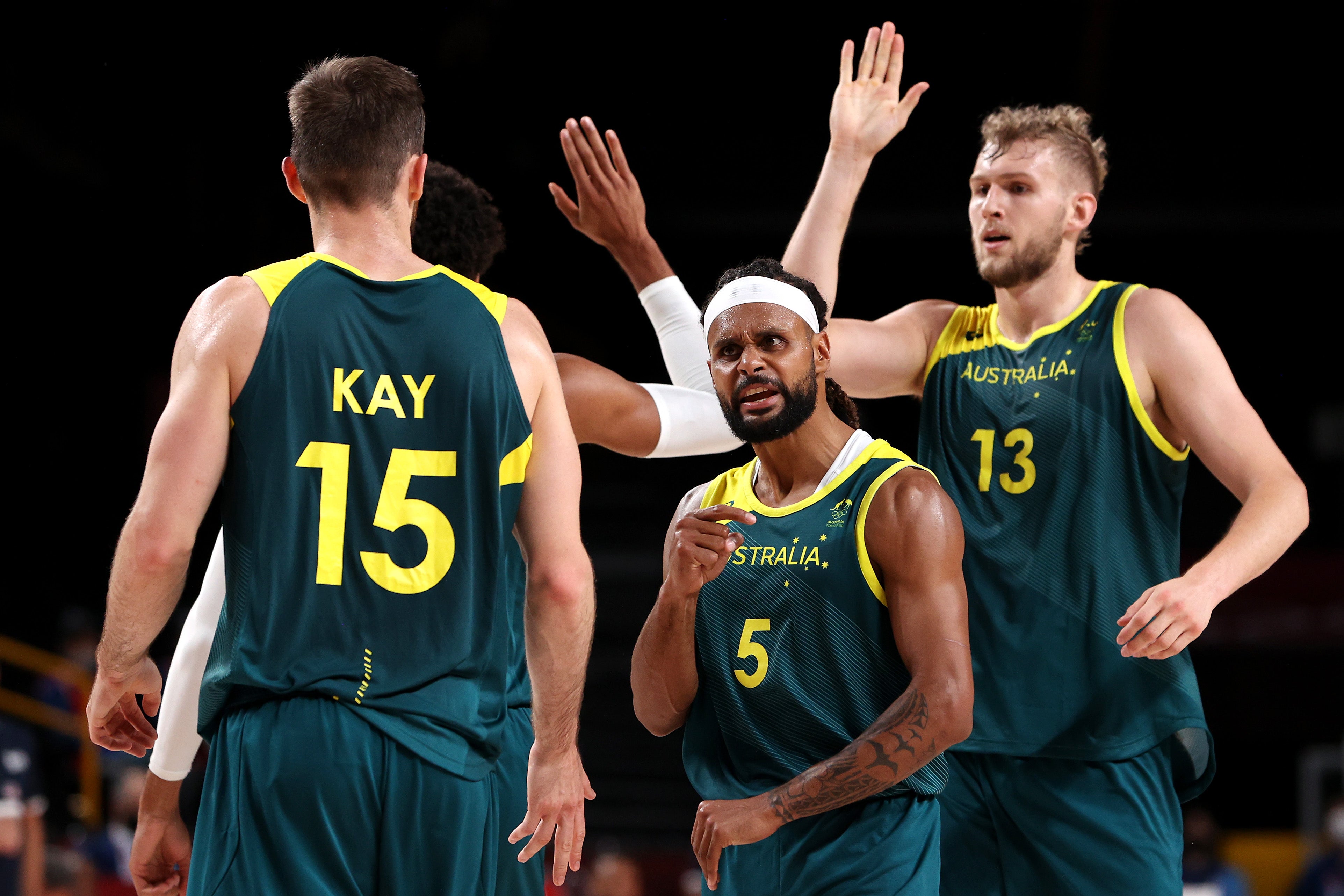 Those facilitators were at the core of Australia’s best work. Joe Ingles, of the Utah Jazz, took a hot-hand into this match, sinking two threes to start and directing the one-way traffic. Patty Mills, now of the Brooklyn Nets, stomped through the paint more than anyone on either side.

The problem, though, was sustaining this charge. The final minutes of the first-half saw the lead of 15 reduced to three into the break. And once out for the second-half, there was only going to be one winner. Durant did what Durant has been doing, but Devin Booker’s 20 points and Jrue Holiday’s eight assists and eight rebounds along with his 11 quashed Australian hopes of a guaranteed medal. Both Holiday and Booker were absent in Australia’s 91-83 victory in Las Vegas last month. 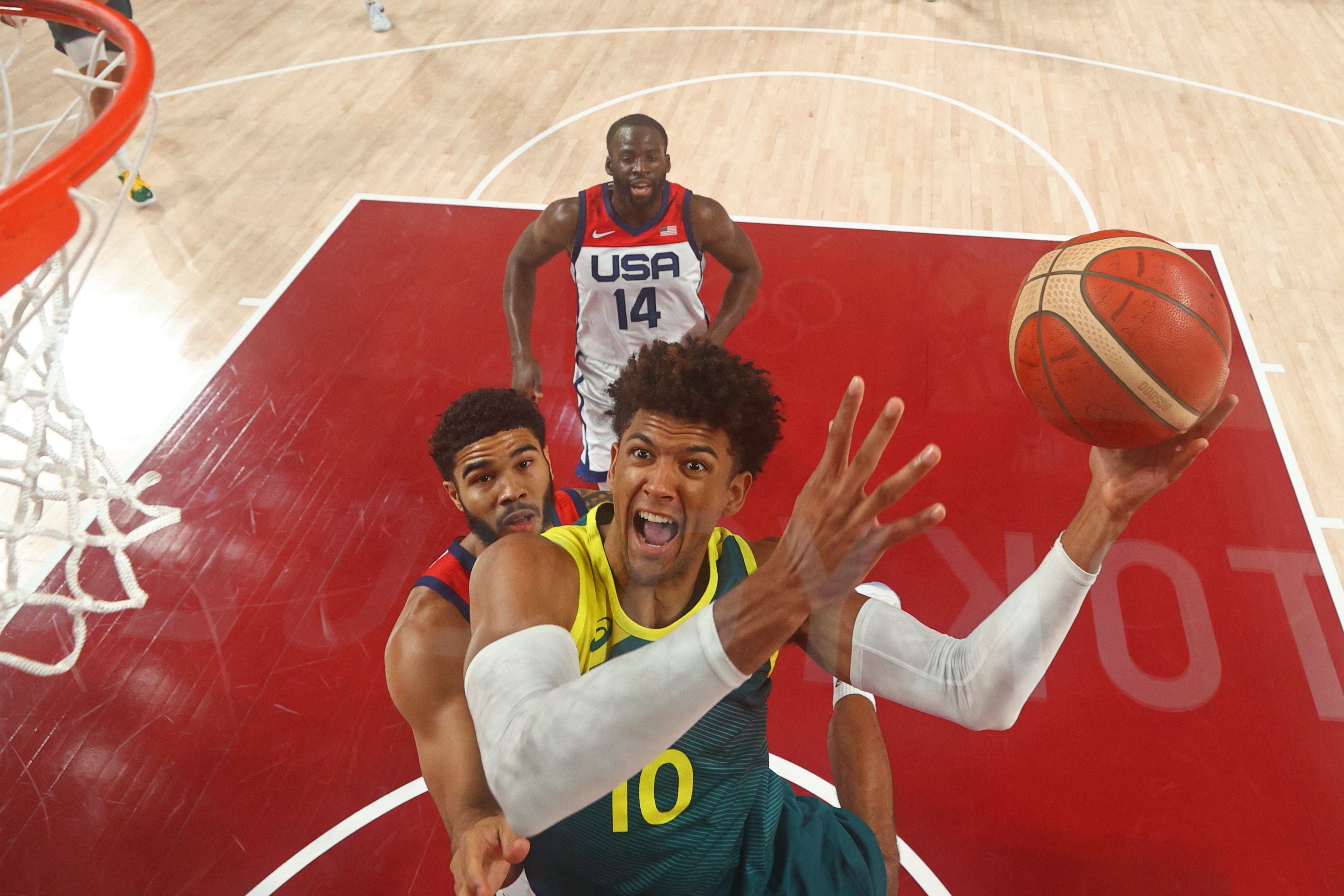 Matisse Thybulle goes to the basket past Jayson Tatum

“They kinda figured out what we were doing and tried to use it against us,” said a shellshocked Jock Landall in the mixed zone. “Defensively, trying to keep them in front is a tough gig. Once they’re out and running in transition, well, it’s fucking hard.”

There had been a lot of talk leading up to this game about America’s influence on the competition. It is a regular talking point at Olympics: how the NBA has lifted other nations to challenge the US, through globalisation within its own league.

That might sound a bit like Americans telling you America wins even when they don’t. But there is truth to it, and the relationship with Australia is part of that.

Six of Australia’s squad ply their trade in the NBA. Ben Simmons, their highest-profile representative from down under opted out of the Games after a tough finish to his season with the Philadelphia 76ers. This week, Landale became the seventh out here when he agreed a two-year-deal with the San Antonio Spurs.

The crossover of Australian and American basketball culture is deep. A 12- to 14-hour time difference means following the NBA is not as demanding a pursuit as it is for those in the United Kingdom. That interest is also supplemented by National Basketball League that experienced a huge uptick in attendance in the 2018/19 season, before the pandemic. 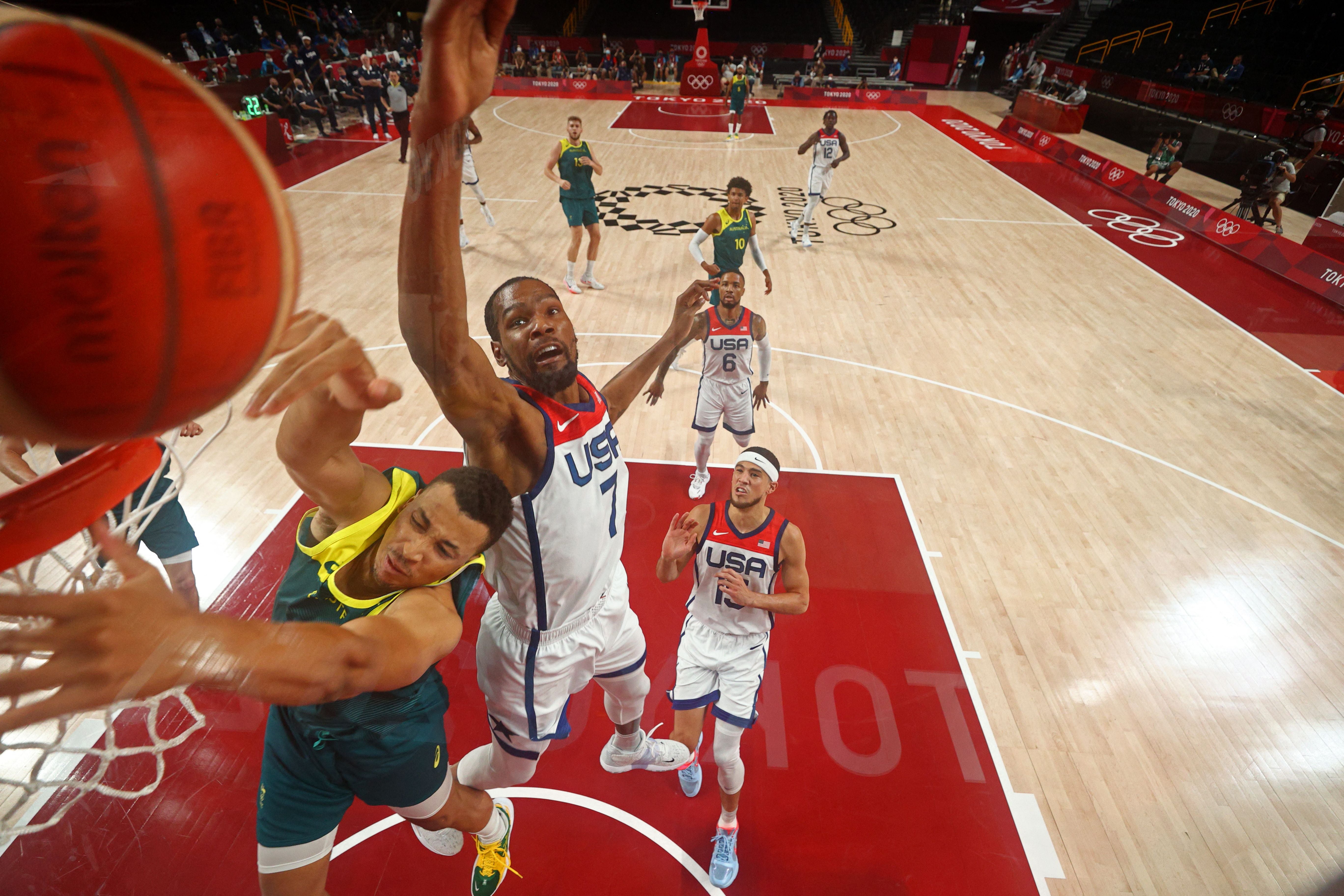 Dante Exum goes to the basket past Kevin Durant

Since being established in 1979, the NBL has housed many an American who could not quite make the great at home. The ability to make a living as enticing as the climate and quality of life.

One of those was Dave Simmons, father of Ben: a New Yorker who went unselected in the 1987 draft so moved to Melbourne in 1989 to play professionally. Ben grew up in the suburb of Fitzroy before moving to the US for high school.

The player exchange is now two-way. As well as Landale’s move to the Spurs, Keifer Sykes, a Chicago native, has been picked up by the Indiana Pacers after consistent performances for South East Melbourne Phoenix. The links, too, are more wide-ranging leading to a situation here where Brisbane Bullets’ Nathan Sobey was up against Milwaukee Bucks small forward Khris Middleton, who is an investor in the NBL club.

But this defeat and Saturday’s shot for bronze is nothing less than Australia have deserved for their consistency. To have finished fourth four times is to have missed opportunities to get any of those three medals four times. It has become a national obsession, in part because so many over the years – both on the court and behind the scenes, have been so deserving. Half of the 12-man squad were there for the gut-wrenching one-point defeat to Spain in 2016.

Head coach Brian Goorjian gets it. Born in California and moulded as a coach in Australia, he beamed pride at the performance but encouraged his charges to forget about the disappointment and instead entertain what lies ahead. “We’ve got something right now in front of us that has never happened in this country and let’s get excited about that.”

Landale, disconsolate, reiterated those sentiments, albeit with his own flourish of Australian: “There will be some guys hurting right now and it’s our job to pick them up and make sure they realise we’ve got one game in 48 hours time to f***ing make history.”

As the US go for their 24th win and Australia their first top-three finish, the desire will be no different, just the colour of the medal. And yet, there is no doubt bronze to Australia will matter more than gold to the United States.