Media playback is not supported on this device

Mikel Arteta said Arsenal’s season “is not good enough for this club” after defeat at Aston Villa confirmed their worst finish since 1995.

The Gunners can now finish no higher than eighth in the Premier League after Trezeguet’s strike gave Villa three massive points.

“It has to hurt and we have to suffer, it’s not good enough for this club,” Arteta said.

“We need to improve in many areas, the team and individually.”

Arsenal qualified for the Champions League every season for 20 years under former manager Arsene Wenger but now must beat Chelsea in the FA Cup final on 1 August to play in the Europa League next year.

They last played Champions League football in the 2016-17 season and will go into Sunday’s final league game against Watford at least nine points short of the top four.

They last failed to finish in the top six in 1994-95 – when caretaker manager Stewart Houston oversaw a 12th-placed finish after George Graham’s departure in February. 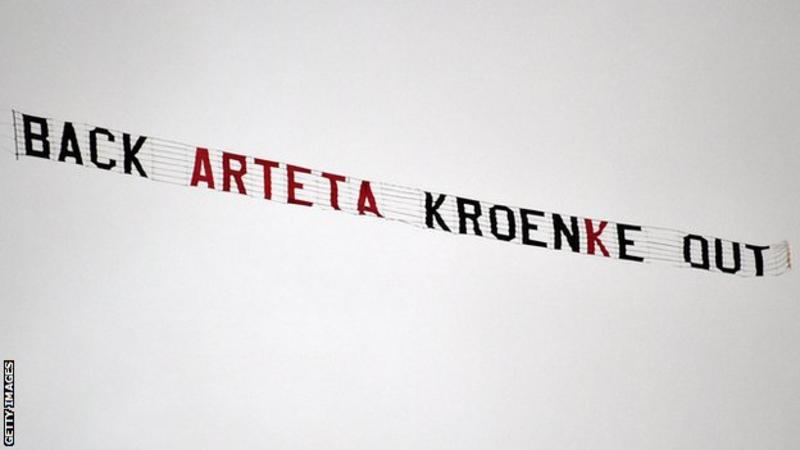 A plane flew a banner across Villa Park reading “Back Arteta Kroenke Out” as fans showed their opposition to owner Stan Kroenke during the defeat.

Arteta said: “The Kroenkes and the board and the sporting director, I have their full backing. I have that 100% – the fans have to believe what I’m saying.

“We are putting a strong plan together to do as much as we can in a short period and the league table doesn’t lie.

“The top teams in certain areas are better than us. We know the challenge, it’s really big and we’re excited for what we have ahead of us.”

Midfielder Granit Xhaka, who came on as a half-time substitute, blamed his side’s attitude for the defeat, which saw the Gunners fail to have a shot on target.

“In my opinion you can’t come here and play like this,” he said.

“It’s not good enough and you can’t play with this mentality. We could have got into the Europa League, but now we have to win the FA Cup and we have more pressure.

“But we will do everything to win the FA Cup now.”