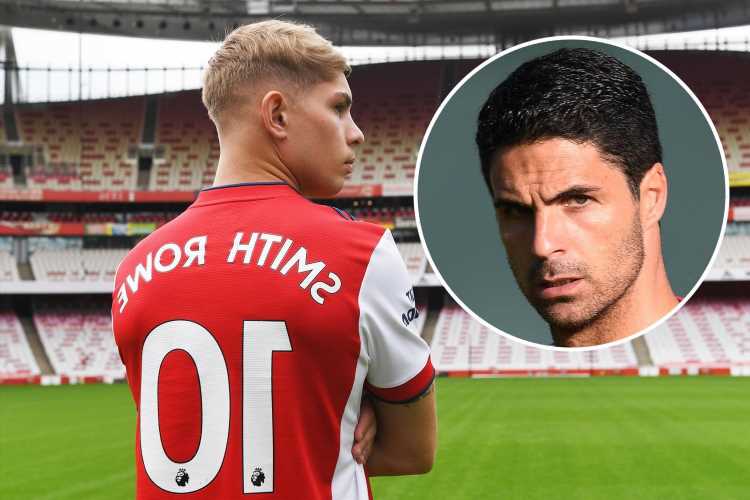 ARSENAL boss Mikel Arteta has explained his decision to give youngster Emile Smith Rowe the No10 shirt.

The 20-year-old will wear the iconic jersey this season after signing a new contract, with his manager praising his 'ambition and desire'.

The attacking midfielder has signed a new 'long-term' deal at the Emirates following months of speculation about his future.

Smith Rowe was linked with Aston Villa, with the Premier League side reportedly having two bids of £25million and £30m rejected.

Discussing the player's new contract on Instagram, Arteta said: "There's been lots of speculation from fans, but he'll wear the famous No10 shirt of course.

"He's told us that he's blown away by that but we know he can handle the pressure, don't we?

"He asked for [the No10 shirt], so that shows you the ambition and desire.

Emile is a player who represents the future of the club and this is why we have given him the No10 shirt.

"I prefer players who ask for more than maybe they can take but if they believe they can do it, don't put a limit on it.

"When he asked me and asked the club that he would like to get that, okay, let's go.

"We talked a little bit, we discussed it and he knows the consequences of that.

Arsenal captain Pierre-Emerick Aubameyang and striker Alexandre Lacazette both joked they wanted the No10 shirt on social media.

Dennis Bergkamp and Paul Merson are among the iconic players to wear the jersey for the Gunners in the Premier League era.

Mesut Ozil was the most recent recipient, with DEFENDER William Gallas famously wearing the No10 at the Emirates between 2006 and 2010.