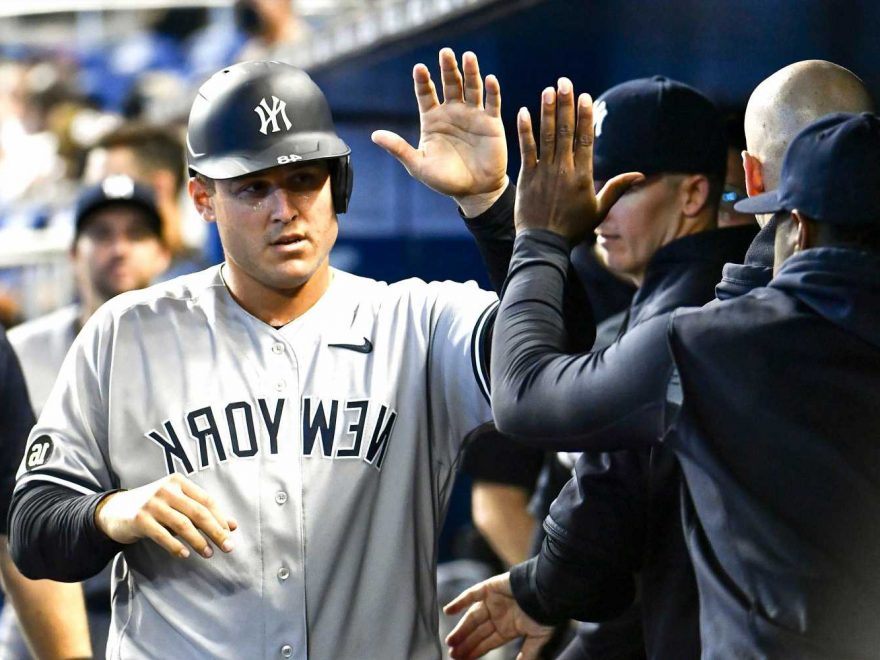 MIAMI — Anthony Rizzo hasn’t wasted any time making his mark on the Yankees.

He hit a monstrous home run in his debut on Friday to give the Yankees a lead and the first baseman delivered again in Saturday’s 4-2 win over the Marlins, when he scored the go-ahead run in the fifth and added another towering homer two innings later for an insurance run.

The 31-year-old Rizzo, acquired in a trade from the Cubs on Thursday, was in the midst of a hot streak with Chicago before the move and it has continued with his new team.

He has hit five home runs in his last six games and provided a much-needed jolt to a Yankees offense that has underperformed all season.

Rizzo got on base in all five of his plate appearances Saturday, getting hit by a pitch and adding a walk and a single before hitting his 16th homer of the season — which gave the Yankees their 4-2 lead. Rizzo walked again in the ninth.

The leadoff single in the fifth was key, as Giancarlo Stanton followed with a walk and both runners advanced on Rougned Odor’s deep fly ball to left.

After Gary Sanchez struck out looking, the Marlins walked Tyler Wade intentionally to get to Domingo German’s spot.

Gio Urshela, not in the starting lineup due to a tight left hamstring, pinch-hit and the Marlins went to Anthony Bender with the bases loaded.

A wild pitch — which catcher Jorge Alfaro probably should have handled — allowed Rizzo to score the go-ahead run before Urshela struck out.

Lucas Luetge replaced German to start the bottom of the fifth and pitched around a leadoff double by Lewis Brinson in the scoreless inning. The lefty then retired the side in order in the sixth, as the Yankees’ new-look bullpen pitched well, also getting a shutout inning from Clay Holmes, who arrived from the Pirates last week.

Chad Green tossed a scoreless eighth and Jonathan Loaisiga came in for the ninth, because Aroldis Chapman having pitched three of the previous four days.

Lewin Diaz followed with a grounder to the right side of the infield, which was shifted, allowing Gleyber Torres to field it. Anderson stopped to try to avoid the tag and Torres tagged him with his glove — but had the ball in his hand — and then bounced the throw to Rizzo at first.

Both runners were safe, and with runners on first and second, pitching coach Matt Blake visited Loaisiga.

Loaisiga got Alfaro looking and Bryan De La Cruz to ground out to end it.

The Marlins were without manager Don Mattingly, who will miss at least the rest of the series after testing positive for COVID-19. Bench coach James Rowson managed in Mattingly’s place.

Odor gave the Yankees the lead for the first time in the second inning.

The inning started when Trevor Rogers drilled Rizzo on the hand. Stanton followed with a double to center that was initially ruled a home run, but bounced off the top of the fence, sending Rizzo to third.

Odor’s single to right scored Rizzo and Sanchez’s ground-rule double drove in Stanton to make it 2-0.

After the first four batters of the inning reached, Rogers recovered to get Tyler Wade, German and Gleyber Torres.

The Yankees loaded the bases with two outs in the third with walks to Rizzo and Stanton and another single to right by Odor, but Sanchez flied to left to keep it a two-run game.

German, coming off a start in Boston in which he didn’t allow a hit until the eighth inning, kept Miami hitless until the fourth inning Saturday, when Miguel Rojas led off with a single.

German got Anderson and Diaz before Alfaro belted a triple to left-center for the Marlins’ first run.

The play was ruled a triple, but Aaron Judge, playing center field, threw the ball to second, which allowed Alfaro to move to third.

Alfaro scored on a German wild pitch to tie the game at 2-2.

The Yankees took the lead for good in the fifth.