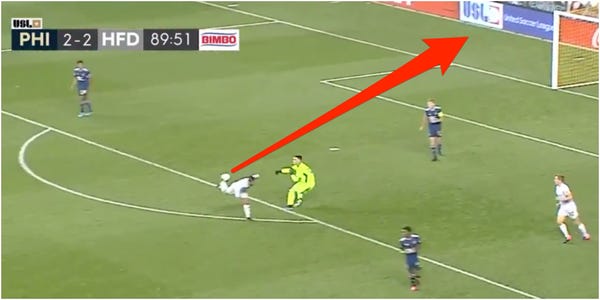 There we no fans at the Subaru Park on Wednesday to watch Philadelphia Union II take on Hartford Athletic in the USL Championship.

Had there been, those in attendance would have witnessed one of the craziest goals in recent memory in the form of Danny Barrera's last minute karate kick winner.

Hartford had blown a 2-0 lead against the Union and the two sides looked set to share the spoils as the ball rolled back harmlessly to Union goalkeeper Mitchell Budler in the final seconds of regular time.

However, as Budler looked to throw the ball out, Barrera, who was stood just outside the penalty area, flung his leg backwards in an attempt to block the ball.

The ball struck the his heel and looped back over Budler into the empty net.

Barrera, despite only coming into the game as a substitute in the 81st minute, was given the Man of the Match award for his spectacular effort.

"That man is a Ninja," said one fan one on Twitter, while another added: "What in the world have I just witnessed?! The Karate master!"

The victory for Hartford moved it to the top of the USL Championship's Group F and to third in Eastern Conferences with one match to play. The USL Championship sits below the MLS as the USA's second most prestigious soccer league.

The team, managed by Tunisian Radhi Jaidi — who is something of a cult hero in English soccer for his spells at Bolton Wanderers, Birmingham City, and Southampton — next play the New York Red Bulls Reserves on Sunday October 4.