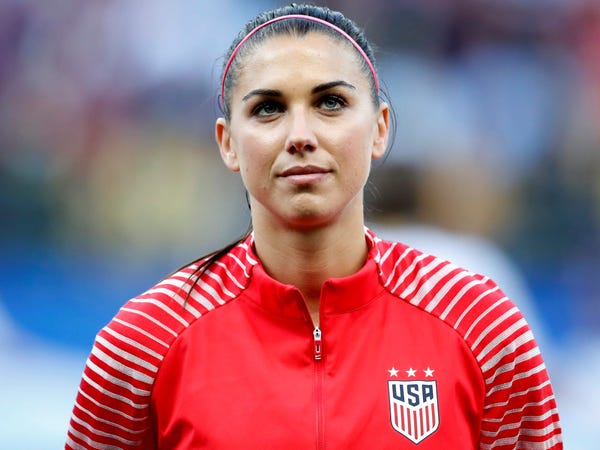 The US Women's National Team released its most recent roster on October 8, and some huge names were not on the list.

Alex Morgan was one of them.

The Olympic gold medalist, two-time World Cup champion, and co-captain of the USWNT since 2018 signed a one-year deal with FA Women's Super League side Tottenham Hotspur in September. As such, she and her five-month-old daughter, Charlie, packed their bags and headed across the Atlantic amid the coronavirus pandemic to begin the next stage of Morgan's club career and help her best prepare for the Tokyo Olympics next summer.

But when USWNT head coach Vlatko Andonovski and US Soccer were formulating plans for the national team's October training camp — the team's first gathering in 7 months — they decided "it just did not make sense for the players in Europe to leave their club environments." So Morgan and a handful of her 2019 FIFA World Cup-winning teammates in Christen Press, Tobin Heath, Rose Lavelle, Sam Mewis, and Emily Sonnett were all left off the roster — a decision Morgan herself agrees with.

"I think that it's the right decision not to bring players back because we are in another country that is handling the pandemic different," she told Insider while promoting her Fun Comes First campaign with GoGo squeeZ. "Obviously health and safety is of utmost priority for each player. Each player needs to decide what's best for them, but in US Soccer making the executive decision not to bring us over, it's because of us getting consistent training and games here."

"[They're] really minimizing the unnecessary travel for us to come meet the team for a training camp that we could be really doing here instead with our respective teams," Morgan added.

Since her first call up in 2010, Morgan has been a stalwart on the USWNT and has seldom missed team events barring injury or her recent pregnancy. Though she noted that "there aren't any games involved" in the upcoming USWNT camp which "was really the deciding factor in not bringing players back," it'll undoubtedly be strange for the superstar striker to miss a national team event she's eligible for.

But even without joining her teammates in Colorado, Morgan has a great opportunity to prepare for the Olympics with Tottenham. The FAWSL — which includes several sister teams to Premier League clubs — has rapidly bridged the gap in skill level between itself and the women's leagues traditionally thought to be the best on the planet, including the National Women's Soccer League and Australia's W-League. She'll face stiff competition in the form of international superstars such as Australia's Sam Kerr, Denmark's Pernille Harder, England's Lucy Bronze, and Ellen White, France's Valerie Gauvin, and Holland's Vivianne Miedema, all of whom have recently joined the FA WSL's ranks.

"It's pretty exciting just seeing so many international players play here as well as so much top talent domestically," Morgan said.

With the Tokyo Olympics less than a year away, the American international will undoubtedly use the next few months with Hotspur to get back up to speed after her post-World Cup maternity leave hiatus. She's confident that her time in the UK will be enough "to get my touch back, to get my speed back, [and] to feel good about going in with the National Team."

But Andonovski assured Morgan that her absence from his most recent USWNT roster was neither a reflection of her own abilities nor an indication of what's to come in 2021.

"Vlatko called each one of us to let us know that it's not performance driven in any way," Morgan said. "It's because of the pandemic, the amount of players in Europe, and the ability for us to continue to get a consistent training and game environment."

Morgan could make her Tottenham debut as early as next week, as Hotspur take on a league-leading Arsenal squad on Sunday. If not, Tottenham's November 4 matchup with Chelsea will more than likely feature Morgan's first live action of the year.