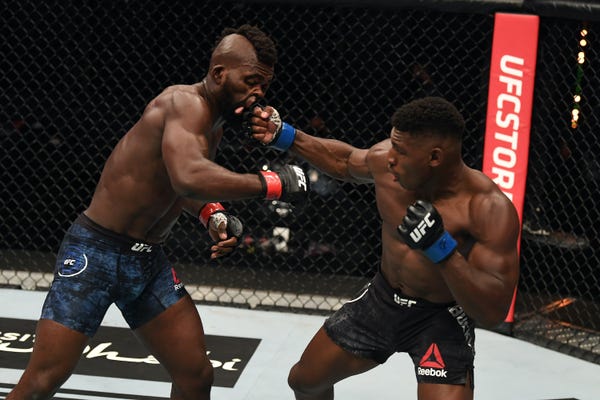 When the UFC produces a montage of its iconic modern-day moments, Joaquin Buckley's knockout win over Impa Kasanganay during the Fight Island festival in the middle of a pandemic, has to feature prominently.

Buckley landed a jump spinning back kick, which likely caught Kasanganay by surprise.

The American was in a vulnerable position as his opponent had caught a previous kick in the palm of his hand. Still, with striking ingenuity and powerful accuracy, Buckley kicked Kasanganay unconscious.

The beaten fighter lay stiff and defeated on the canvas while Octagonside onlookers were pictured open-mouthed with their arms above their head.

They couldn't believe what they had just seen.

The UFC itself called Buckley's knockout the "most unbelievable" in its entire history.

But the middleweight match, the fifth bout on a 13-fight card, was one of many sequences that deserve to be immortalized in a highlight-reel that we fondly look back on in the future.

Buckley's second-round stoppage win preceded a 45-second knockout from the Philadelphian police officer Chris Daukaus and a brutal stoppage from the British athlete Tom Breese, who floored his opponent with a jab, then hit his skull with hammer fists until the referee waved the bout off for good.

The three successive finishes meant the three final fights on the ESPN+ preliminary card were frenetic-paced and contained edge-of-your-seat action, which had to be seen to be believed.

But the show was far from over. The main card had not yet even begun.

With three fights finishing in under 10 minutes of competition, a decision was perhaps overdue.

And for those looking for wrestling rather than striking, Ilia Topuria edged Youssef Zalal in a grapple-heavy bout.

But then Tom Aspinall, a relative newcomer to the UFC, took just 95 seconds to knockout Alan Baudot. And rather than celebrate, he just looked moody and annoyed after the win.

Aspinall later said it was because he felt like he had made a few mistakes during the fight, even though he was only ever hit five times according to official UFC data.

Dricus du Plessis scored a memorable stoppage over Markus Perez, Marcin Tybura out-pointed Ben Rothwell, and Edson Barboza appears not far from a title shot as he decisioned Makwan Amirkhani in the penultimate bout of the evening.

Then came the main event.

And, again, there was another highlight-reel moment for the ages as Cory Sandhagen pulled off a masterclass, scoring a spinning wheel kick before hitting his downed UFC opponent with punches, forcing the referee to drag him off of Marlon Moraes' defeated body.

Though the UFC was forced into a coronavirus-enforced hiatus earlier in the year, it feels like the quality of some of the fights, and the shows in general, are as good as they've ever been.

The lack of a crowd has done little to evade the allure of seeing athletes try and beat the crap out of one another.

Justin Gaethje produced his magnum opus in the UFC's first pandemic era event — a stunning domination of Tony Ferguson, who had not been beaten in eight years.

In the weeks that followed, Glover Teixeira beat Anthony Smith's teeth out of his mouth, Cody Garbrandt scored a knockout of the year contender against Raphael Assuncao, and Dustin Poirier edged Dan Hooker in a back-and-forth slobberknocker for the ages.

Then the UFC did something different.

It embarked on Fight Island — a new concept that became a superstar in its own right, including early morning golf, late-night, white knuckle joy rides around a race track, and many more memorable fights.

Back at the purpose-built UFC Apex in Las Vegas, Stipe Miocic forced the media to ask whether he is the greatest heavyweight of all-time after he beat Dan Cormier in a trilogy scored 2-1 in his favor.

Colby Covington caused Trump-related controversy after beating Tyron Woodley with ease, Israel Adesanya kicked off another Fight Island festival by air-humping Paulo Costa after a second-round finish, and, perhaps somewhat fittingly, Gaethje — who kicked-off the UFC's coronavirus era — could soon become the fighter of the year.

There is one more Fight Night event Saturday, but the week after that is UFC 254.

All Gaethje has to do is become the first person to defeat the UFC lightweight champion Khabib Nurmagomedov.

It is, unquestionably, his toughest challenge.

But after what he produced against Ferguson, combined with his collegiate wrestling background, Gaethje may turn out to be Nurmagomedov's toughest challenge, too.