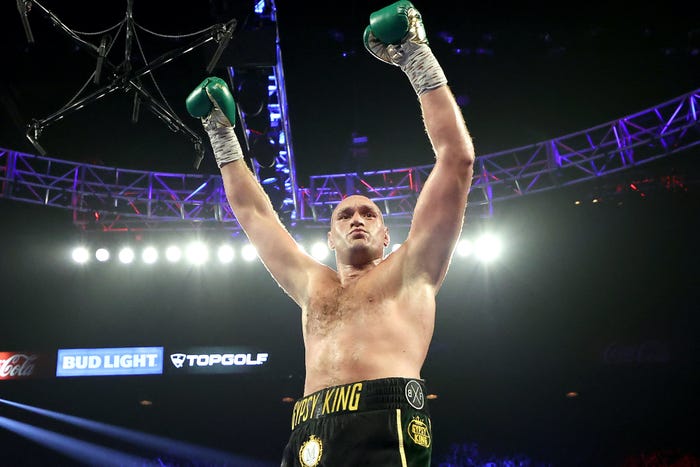 LONDON — Tyson Fury and Deontay Wilder's trilogy bout is reportedly closer than we might have thought.

The heavyweight rivals fought to a disputed draw two years ago in Los Angeles before a high-stakes rematch in Las Vegas which Fury impressively won earlier this year with an aggressive masterclass.

A third fight was contractually mandated, but is yet to see the light of day because the coronavirus pandemic led to complications with boxing in general, let alone elite, multi-million dollar bout agreements.

The heavyweight focus in boxing, though, is currently in London, as the WBA, WBO, and IBF world champion Anthony Joshua is two days away from defending his titles against Kubrat Pulev in front of a partial fan allowance at the SSE Arena.

But Adam Smith, head of boxing at Sky Sports, said the gossip around the London boxing scene right now is that: "Deontay Wilder is preparing for Tyson Fury."

The Sky Sports pundit Johnny Nelson, a former cruiserweight world champion, added: "I was speaking to one of Tyson's representatives two days ago and they were saying the signing of the contracts is imminent."

The speculation comes days after Fury's US promoter Bob Arum, who runs powerful Las Vegas-based Top Rank, told the Betway Insider blog that Wilder is the best option for his client other than Joshua.

Arum also represents Pulev and wants to see the Bulgarian knock Joshua out this weekend.

"If Pulev beats Joshua there's no Joshua fight for Tyson Fury because Joshua has a rematch clause [to fight Pulev again].

"At that point, Fury is out there looking for opponents and I'd think the best available opponent would be Wilder."

Insider spoke to Fury's UK promoter Frank Warren last month, and asked him if the threat of litigation from Wilder's team was the reason a proposed stay-busy bout with Agit Kabayel this month didn't come to fruition.

Warren said that the threats were "a pain in the backside," but that was not the reason Fury remains sidelined. "Unfortunately, the finances didn't stack up, and so it is what it is."

Fury has not fought since knocking Wilder out in the seventh round in February, and Warren told us the mood in the winning locker room post-fight was "phenomenal."

He said: "I said he'd stop him, I fancied him to stop him, and he was just brilliant.

"He was in a good place, it all went to plan. He's a very smart man, Tyson, and bringing in SugarHill Steward added another dimension to his arsenal. He did what he had to do, and he done a job."

Warren said in November that he hadn't spoken to Fury for a few days, but stressed that the fighter was happy, despite not being able to compete again all year.

"He was disappointed the [Kabayel] fight wasn't going on — that was a bit of a knock-back for him.

"Hopefully he'll get out again in the new year in Q1."

On whether the opponent will be Kabayel, Warren told us: "We agreed with the terms [for the proposed December bout] and that's what we were going to go with. We'll see. We've got to get the dates sorted out."

When asked if the opponent could be Wilder, he said: "I don't know."