A marauding bear and a foul-smelling swimming venue have sparked alerts for Olympics organisers as the sporting action began in Japan.

Sightings of an animal intruder caused alarm for police outside the Fukushima softball venue, which was hosting the first event of the COVID-delayed Games.

Officers confirmed they had been unable to immediately track down the animal. 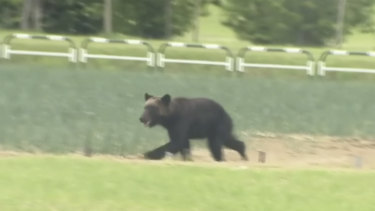 A brown bear runs on a field in Sapporo, northern Japan, last month. It was put down after entering a military camp and injuring four people.Credit:NTV/AP

While in Tokyo Bay concerns about elevated levels of E-coli bacteria were raised about a stomach-churning odour and water quality in the area, where open-water swimmers and triathletes are due to compete.

Local reports said residents had complained that the bay smelled “like a toilet” immediately around the Odaiba Marine Park, an urban beach in the heart of Tokyo where the marathon swim and triathlon events take place. 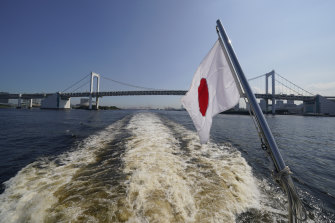 The Japanese flag flies from the stern of a cruise boat during a media tour of Tokyo Bay ahead of the start of the Summer Olympics on Monday.Credit:AP

In 2019, the swimming at the Paratriathlon World Cup was abandoned due to elevated levels of E-coli at the Odaiba Marine Park, but Tokyo organisers have ruled out any change of venue, saying the E-coli levels fall within “agreed limits” on most days.

There were also foul smells and water quality concerns at the Rio Olympics, with at least one athlete, German diver Stephan Feck, describing the stench coming out of the “green pool”, which was shut down for maintenance, as smelling like a “fart”.

The British team said it was confident the Tokyo waters would be safe.

“Our athletes have been in that water for test events and training and in competition,” Mark England, Britain’s chef de mission, said. “We look forward to seeing the triathletes compete there next week.”

Triathlon events are set for Monday, Tuesday and a week on Saturday, while the marathon swim – a 10-kilometre endurance event – is scheduled for the following week.

Meanwhile, police had launched a hunt just hours before the opening softball match between Japan and Australia which ended in an 8-1 victory for the Games host.

A security guard at the Azuma Sports Park first spotted the brown bear at the venue early on Tuesday, and it came back again on Wednesday just hours before the match.

“We couldn’t find or capture the bear, and while there won’t be any spectators at the stadium, we are on alert and searching for the bear around the site,” the official said.

Local media reported that organisers responding to the incident tried several methods to get rid of the animal, including playing loud music and setting off firecrackers.

In 2020, bear sightings reached their highest point in five years, with more than 13,600 reported sightings across the country from April to September.

At the time, experts said the increase could be linked to the coronavirus pandemic, which saw residents confined to their homes in an effort to beat back the illness – leading to the animals venturing out into spaces to search for food that would usually be populated with humans.

“Bears might have expanded their areas of activities after not seeing humans around during spring and early summer season,” Shinsuke Koike, an associate professor of ecology, told Bloomberg Green.

Last month, a bear sparked a massive search involving police and local hunters in the northern city of Sapporo, which will host the Olympic marathon. Authorities confirmed that hunters shot and killed a brown bear in the city of Sapporo after it went on a rampage through residential streets and stormed a military base, wounding four people.