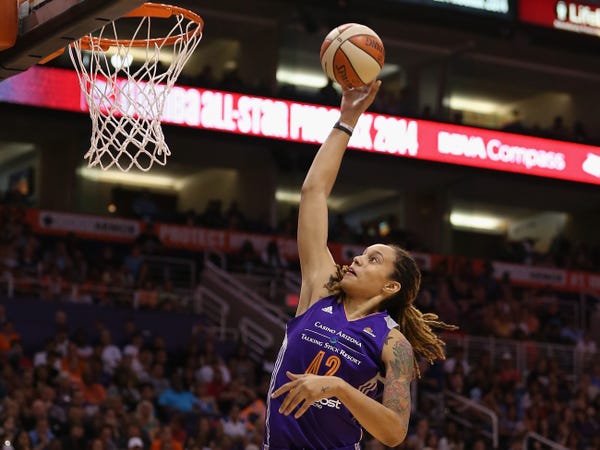 The 2020 WNBA playoffs are underway in the "Wubble" at IMG Academy in Bradenton, Florida. As the games heat up, Insider is taking a look back at the league's history.

Seven players have dunked during WNBA games since the league formed in 1997. Lisa Leslie first broke the 10-foot barrier in 2002, when she rose up for a slam during a Los Angeles Sparks game. Since then, All-Stars like Candace Parker and Brittney Griner have revolutionized the WNBA's game above the rim.

Here are all the WNBA stars who've thrown down dunks throughout the league's history, with highlights from each player:

On July 30, 2002, Lisa Leslie became the first player in WNBA history to dunk during a game.

Michelle Snow was the third player in women's college basketball ever to dunk in a game. Snow threw down a reverse dunk during the 2006 WNBA All-Star Game.

Candace Parker dunked in the final seconds of a Los Angeles Sparks game in 2008, becoming the second player to dunk during a regular-season game in league history.

Sylvia Fowles threw one down during the 2009 WNBA All-Star Game.

At 6-foot-8, Brittney Griner wasted no time before dunking in the WNBA. She slammed home two in her debut for the Phoenix Mercury in 2013.

In 2018, Liz Cambage dunked during the WNBA All-Star Game — six years after making history as the first woman to dunk in an Olympic game.