Are masks giving men a licence to stare? Women report a rise in ‘aggressive eye contact’ since face coverings became commonplace as an expert warns they ‘provide anonymity’ for threatening behaviour

Women across the country are reporting a rise in ‘aggressive eye contact’ since the introduction of face coverings in some public places.

New laws introduced over the weekend force customers to wear face masks in all shops, stations, banks and post offices, while it is also mandatory to wear coverings on public transport.

But many women have been sharing stories online of ‘aggressive eye contact’ and ‘hard staring’ from men wearing masks, with one tweeting: ‘Grown men staring at you with a mask on is worse than when they don’t have a mask.’

UN Women UK Executive Director Claire Barnett told FEMAIL: ‘As we work to “build back better” following lockdown, we need to prevent the lack of witnesses of antisocial behaviour due to less populated public spaces, as well as the anonymity face coverings can provide, leading to further rises in harassment and threatening actions towards women, girls and minoritised groups.

‘This will require widespread changes in attitudes and behaviour – creating an understanding that behaviour like unwanted and persistent staring is intimidating, and that we all have a role to play in making our public spaces more inclusive.’ 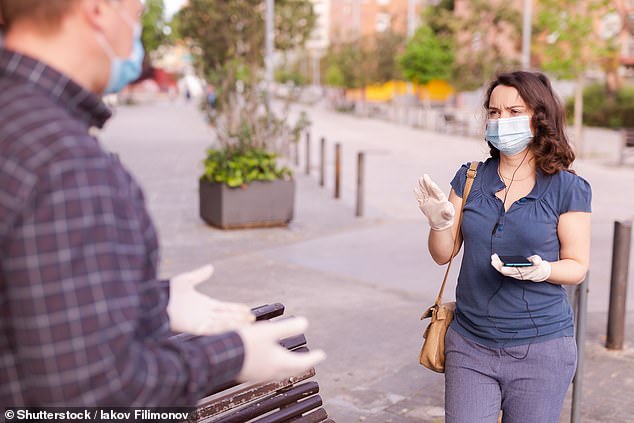 Women are taking to social media with their stories of intimidating behaviour from men wearing masks, with many saying there has been an increase in ‘staring’ and ‘demanding eye contact’ since the introduction of face coverings (pictured, stock image)

Women are complaining about a rise in intimidating behaviour from men wearing masks, with many taking to social media to share their stories.

One person commented: ‘Does anybody else feel like men are way more aggressively demanding eye contact in public since we all started wearing masks?

‘So much hard staring happening. And I can’t diffuse the attention by smiling like women are conditioned to do. It’s weird.’

Another wrote: ‘Seriously, we all are wearing masks and some men still keep staring. WTF is wrong?’

‘A jaunt downtown revealed men do not understand the anatomy of masks,’ another wrote.

‘The masks do not cover your eyes. I can still see you staring, idiots.’

Claire told FEMAIL that the crisis continues to have a ‘damaging effect on women’s economic opportunities, social experiences and health’ so it remains ‘more important than ever that women can move freely through public space without intimidation. 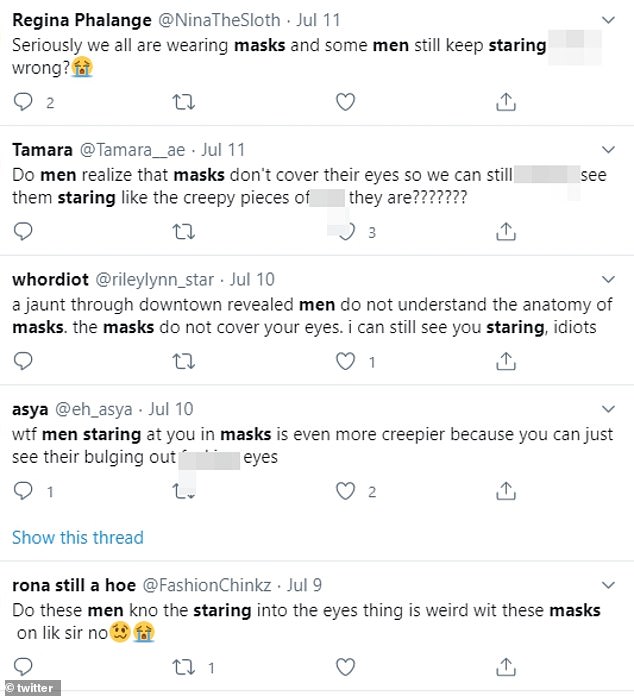 Many women have taken to Twitter to  share their experiences, with some saying staring has been ‘worse’ and ‘creepier’ recently

She explained: ‘As part of our campaign to make the UK’s public spaces safer and more inclusive for women and girls, we’re hearing reports of rising harassment and threatening behaviour in the streets and on transport, in addition to the clearly documented rising domestic abuse within the home.

‘This can be particularly severe for women who also experience another intersecting minority characteristic, like women of colour and differently-abled people.’

Claire went on to say that it was important to be wary that the anonymity face masks provide, as well as the less populated spaces, don’t lead to an increased rate of harassment for women.

Masks have been compulsory on public transport since July 15 after evolving scientific advice suggested they could help stop Covid sufferers without symptoms from spreading the disease. 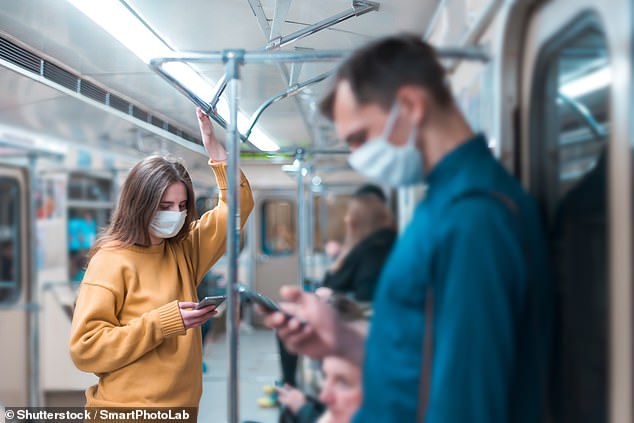 Failure to comply could result in a £100 spot fine, although police forces have indicated they will only respond as a ‘last resort’. Scotland Yard said it hopes shoppers who refuse to wear masks will be ‘shamed’ into compliance.

A mask can only be removed in a shop for a small number of reasons, such as allowing staff to check someone’s identity or age or to communicate with a deaf lip reader. Shop staff do not have to wear coverings but it is ‘strongly recommended’ that employers ask them to do so unless they have other precautions such as screens.

The new rules are contentious, with some people finding masks uncomfortable and some libertarians complaining they are being ‘muzzled’ by the state.

Face coverings are now mandatory in shops and supermarkets across England.

Under new rules introduced by the Government over the weekend, people will need to cover their nose and mouth or face a fine of up to £100. People with certain disabilities will be exempt.

This comes after rules requiring people to wear face coverings on public transport became mandatory last month. Initially many experts and authorities including the World Health Organisation suggested face coverings were not effective in preventing the spread of COVID-19 but are now recommending wearing them in indoor spaces.

– When do I need to wear face masks?

Face coverings will have to be worn in shops, supermarkets and enclosed shopping centres as well as train stations, banks, post offices, building societies, bus stations and airports.

The Government has also said that people taking out food and drink from cafes has to wear a face mask, but does not have to wear a covering if they sit in the premises.

Meanwhile, supermarket and shop staff do not have to wear masks, with several major retailers including Sainsbury’s, Asda and Costa Coffee saying they will not police the rules aggressively.

Masks do not have to be worn in pubs and restaurants, museums, cinemas, theatres, indoor gyms and leisure facilities, spas and beauty salons, hairdressers, galleries, concert and bingo halls.

Face coverings are also thought to make no difference outdoors as the risk of transmission is low in open air.

Failure to comply with the rules could result in a £100 fine although the police have said they will not be aggressively enforcing the law, with ministers hoping the public will show ‘common sense’ on the issue.

– Are there any exemptions?

Yes, while face coverings will be mandatory in shops, banks, takeaways, post offices, sandwich shops and supermarkets in England from Friday there are some exemptions.

Section three of the Government guidance, published on Thursday, sets out a list of ‘legitimate reasons’ not to wear a covering. Groups and settings include:

If speaking with people who rely on lip reading, facial expressions and clear sound to help with communication.

It is not mandatory for shop or supermarket staff or transport workers to wear face coverings but employers can ask them to do so where appropriate and where other mitigation is not in place, the guidance states.

People exempt from wearing a face covering can choose to carry and show an exemption card, badge or even a home-made sign, the Government says.

– Has there been confusion over the new rules?

Yes, opposition MPs have said it needs to be clarified whether customers have to wear face coverings in takeaways and sandwich shops in England.

The criticism came after days of mixed messages with the Health Secretary and Boris Johnson’s official spokesman contradicting each other on the matter.

The Daily Telegraph reported that people using sandwich shops and takeaways will be required to wear a mask, and buying food from the counter and then sitting down to eat inside the shop will be banned.

Ministers are facing accusations that the new rules are muddled, inconsistent and illogical, with face masks not necessary in pubs, restaurants and cinemas, but mandatory in shops, takeaway shops and shopping centres.

David Strain of Essex University said there was ‘no logic to the exclusion of theatres and cinemas’ as social distancing could not be enforced: ‘There is no reason why shopkeepers or supermarket staff should be exempt’.

Chaand Nagpaul, head of the British Medical Association, told The Times: ‘While today’s guidance is in some ways helpful, the uncertainty of recent weeks has done nothing to inspire public confidence. Meanwhile, if venues such as theatres, museums and salons are not subject to these rules, there must be an absolute assurance that they can protect the public by enforcing physical distancing or putting other mitigating measures in place.’

And Jon Richards of the Unison union said: ‘Government guidance has been confusing from the beginning. The UK was late to the table on face coverings and now people don’t know what they should do.

‘There are rules for shops and public transport, but not for other enclosed spaces such as libraries, register offices and civic centres. The public needs clarity to end the muddle.’

– What does the science say about face coverings?

A Royal Society report suggests that even basic homemade face coverings can reduce transmission if enough people wear them when in public.

The study, based on mathematical modelling, showed that if an entire population wore face coverings that were only 75 per cent effective, it would bring the R value, which is the number of people an infected individual passes the virus on to, from 4.0 to under 1.0, without the need for lockdowns.

Another Royal Society report suggests the use of cotton masks is associated with a 54 per cent lower odds of infection in comparison to the no mask groups, when tested in a healthcare setting.

Melinda Mills from the University of Oxford told a webinar: ‘So that should suggest that when you’re generally in the public that it should offer you some, not 100 per cent, but it does offer you some protection.’

Another study which looked at coronavirus deaths across 198 countries found that nations which had policies favouring mask-wearing had lower death rates.

– What are the benefits to wearing them?

Experts say the risk of coronavirus transmission appears to be higher in poorly ventilated indoor spaces and wearing face coverings in small shops or enclosed shopping centres could help reduce the spread.

Keith Neal, professor of epidemiology at the University of Nottingham, said: ‘Lack of strong evidence of their effectiveness should not be considered a problem but the evidence is accumulating that they have a part to play in reducing transmission and also in protecting the wearer.’

In addition, there is also increased evidence which suggests that many people with the virus who do not have symptoms can still be contagious.

– What do people need to know about wearing masks?

Ideally the face coverings should be made of multilayer high quality cotton.

Where possible they should be should be worn in indoor confined spaces and crowded spaces, especially where social distancing cannot be maintained.

Japan follows the three Cs, closed spaces, crowded places, and close-contact settings. When wearing a face covering, it should cover the mouth and nose.

– Are some face coverings better than others?

It emphasises that a face covering alone cannot protect people from COVID-19, and must be combined with social distancing of at least a metre and regular hand washing.

The Government has said coverings can be made from scarves, bandanas or other fabric items, as long as they cover the mouth and nose.

But scientists at the Leverhulme Centre, who studied different types of face coverings used by members of the public, say some coverings are not as effective as others, with loosely woven fabrics, such as scarves, shown to be the least effective. Prof Mills, director of the Leverhulme Centre, said: ‘Attention must also be placed on how well it fits on the face; it should loop around the ears or around the back of the neck for better coverage.’

– What are the main messages about face coverings?

Prof Mills says cloth coverings are an effective way to protect the wearer and those around them. She says that face masks and coverings cannot be seen in isolation and are part of a package that involves hand hygiene and social distancing. Consistent and effective public messaging is vital, she concluded.