An unnamed woman has come under fire after fellow passengers noticed her bizarre habit while flying.

The woman, thought to be from the US, made herself comfortable by resting her bare feet on the headrest of the seat in front, while reclining in her own chair.

Seemingly in an effort to hide her naked toes from flight attendants, she placed a hat on top of her feet to cover them up.

She has been slammed online for the habit, with many labelling it ‘gross’. 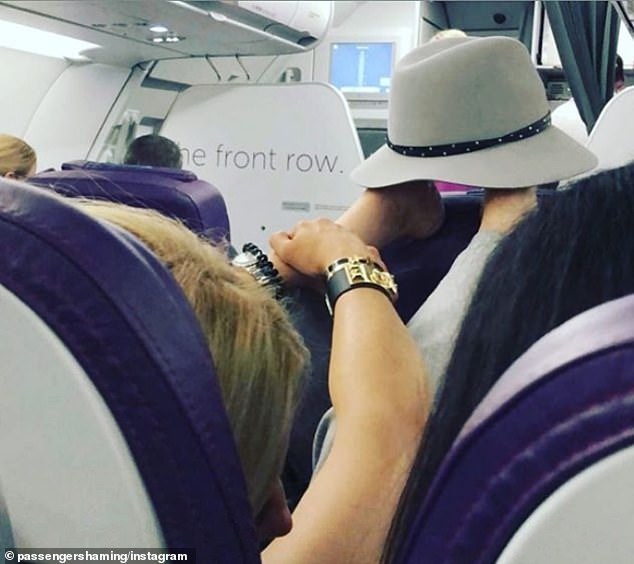 The photograph  of the woman resting was shared on a passenger shaming account on Instagram, where other users slammed the woman for her odd sleeping position

A snap of the woman was shared on the Instagram account, @PassengerShaming, which has almost 850K followers.

In it, she appears to have settled in for a comfortable nap by putting her legs in the air and resting her feet on the chair in front, with her bare toes touching the head rest.

She has even placed a grey hat over her bare feet in an effort to hide them from flight attendants, or fellow passengers, who might find her behaviour bizarre or tried to tell her off.

The photograph has so far reached over 3,600 likes – but it seems not everyone is impressed by the practice. 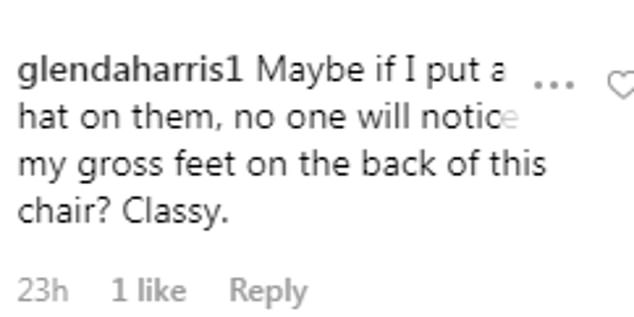 Many Instagram users slammed the anonymous woman for her habit, with some calling her gross and several suggesting they would ‘call her out’ if they’d been on the flight

Many Instagram users slammed her for the habit, with some calling her ‘gross’ and suggesting they’d call her out on it.

‘If this was my seat and I saw this I would lose my mind,’ one commented.

Another user wrote: ‘Ok, I’d say something. People are the worst.’

Other Instagram users tried to look on the brightside of the situation, and seemed to think the hat deemed the habit a little better

One slammed the woman as a ‘slob’, writing : ‘The grossness just never stops. So many slobs.’

Another was left stunned by the act, writing: ‘Maybe if I put a hat on them, no one will notice my gross feet on the back of this chair? Classy.’

One tried to point out the ‘bright side’ of the situation, stating:’At least she covered her feet with her hat?’