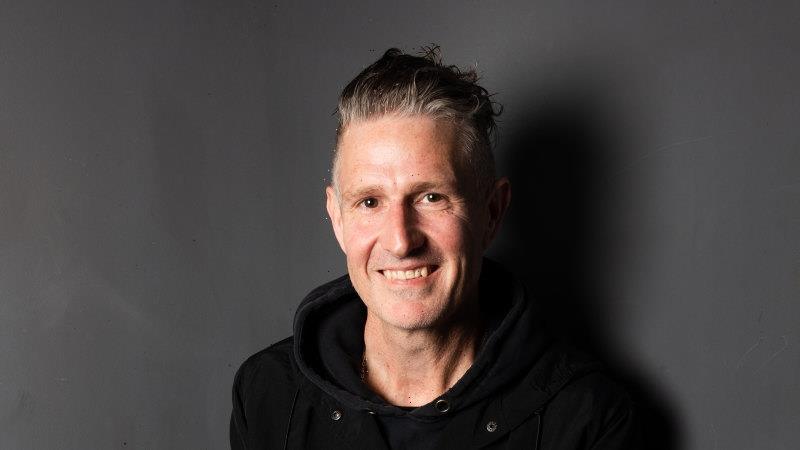 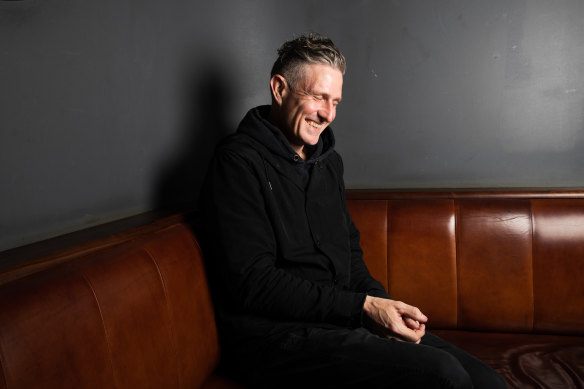 Wil Anderson has been in the public eye for more than 20 years.Credit:Edwina Pickles

Wil Anderson is not fine, thanks.

Sure, it’s the title of his new book but it’s also his state of mind.

Not fine about COVID, about anti-vaxxers, climate change, fossil fuel billionaires and living with chronic pain. This is a man who cries while watching the movie The Mighty Ducks and who weeps while trying to fix his washing machine. He is fine about echidnas, though. They’re one of the few things that get a pass in Anderson’s semi-bleak view of the world.

He didn’t set out to write a book about COVID-19. It was supposed to be about what he’d learnt as host of his Wilosophy podcast, but then COVID came and everything before it seemed irrelevant.

It’s why there is no simple answer to the question of “How are you, Wil?” Like most people, he used to say, “Fine, thanks,” but no more. 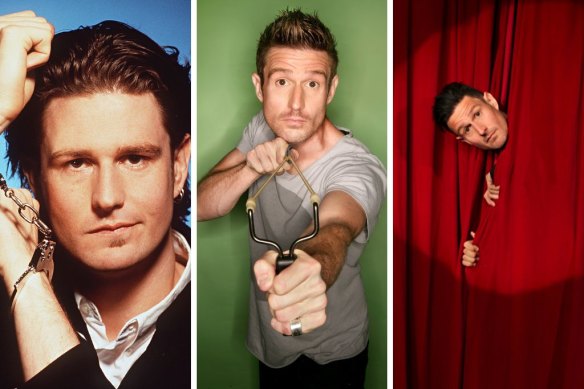 Through the years (from left): Anderson in Terra Wilius, one of his early shows at the Melbourne International Comedy Festival and in 2009 and 2012.Credit:James Penlidis, Simon Schluter, Steven Siewert

So, when we meet in Surry Hills on a very rainy Monday morning, the first thing I ask him – after we’ve checked the menu and both rue that we didn’t bring our glasses (he orders banana bread because he heard someone else ask for it; I ask the waitress to – gulp! – read part of the menu for me) – is “How are you, Wil?”

“It’s funny, though, isn’t it?” he says. “Because I didn’t choose the name for the book. I just said [to the publishers], ‘Read it and and tell me what you think it should be called.’ And the first thing that they came back with was the title of the book.

“And I said, ‘Yeah, I think that works.’ Because at the heart of it is that question, ‘How are you?’ And the realistic answer is, ‘Not amazing.’ The world isn’t great and how could you be [fine].”

In person, Anderson is a fidgeter. When I interviewed him 19 years ago after a stand-up gig, he constantly fiddled with a bottle of nail polish and today he’s much the same. He’ll rip up any paper in front of him, he says, and today he shifts constantly on his seat. That’s as much from the chronic back pain that’s a result of his osteoarthritis, as it is any need to fidget. 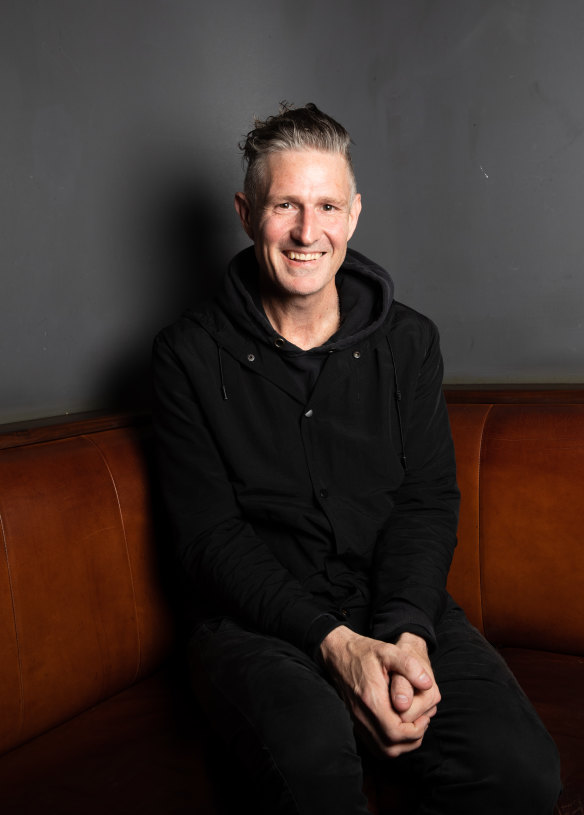 Wil Anderson: “The world isn’t great and how could you be [fine].”Credit:Edwina Pickles

He jokes about the back pain in the book and the fact his ears are shaped in such a way that he can’t wear a mask properly. He is, literally, a man who is not built for these times. What the 48-year-old can do, though, is talk. It’s how he processes things and it’s why he is built for stand-up comedy. “I start talking, and I never stop talking,” he says. “As you may have noticed.”

I Am Not Fine, Thanks is a natural progression of Anderson’s stand-up. It’s not a memoir, more a series of wry and funny vignettes about the last two or so years of his life. It’s about what happens when you find a woodpile at the bottom of your garden, discover a lump on your ear and are terrified of the winding drive home. It’s a story of throwing out an exercise bike, mowing his lawn and – remarkably – becoming the first person on the Northern Rivers to become accepted into the medicinal cannabis program. But it wasn’t supposed to happen at all.

At the beginning of 2020 he had a plan: he’d moved from Melbourne to the Northern Rivers of NSW, tucked up in the hills well behind Byron Bay, he’d quit his radio gig and was going to spend the year doing stand-up. He was due at the Melbourne International Comedy Festival, where he was booked to play his 25th year in a row.

As he writes in the book, he was certain 2020 was “going to be the best year of my life”. But then COVID-19 happened and everything fell through. Like many in the arts, a week, a month and then a year of gigs were cancelled. Sure, there was some television – a short stand-up gig filmed at his house and his ABC shows Gruen and Question Everything – but it was the loss of stand-up that really hurt.

“I’m a stand-up who just has been lucky enough to do other things,” he says. “And it’s always been my core belief that when those other things go away, that I’ll just go back to being a stand-up and everything will be fine. And then suddenly, that might not be true, stand-up may never be the same again.” 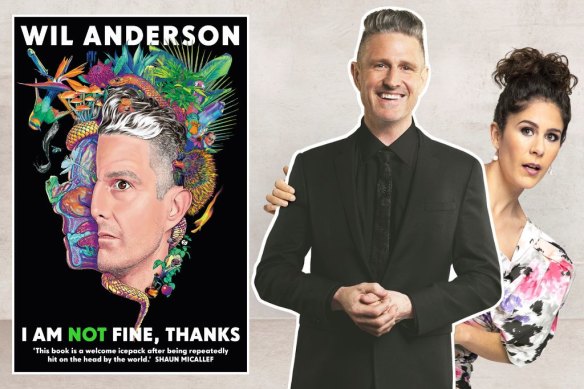 Anderson with Jan Fran on Question Everything and, inset, the cover of his book I Am Not Fine, Thanks.Credit:ABC

“It makes sense. We now live in a society where anyone who has an autoimmune disease or is incapacitated in any way, or just is going on holidays next week, they don’t want to go and sit in a room with 1000 other people.

“I would have said last year a third of my audience stayed away still, and I get it because I’m staying away still. When I’ve got other things to do, at the moment I’m working on a TV show [Question Everything] where 30, 40, 50 people rely on me. I’m not going to do anything. I was nervous about coming to this today because I try to be completely safe on behalf of other people.

“So I imagine, particularly my audience, who are older and have families and responsibilities, they can’t make those choices [about going out] in the same way as they used to. I mean, it’s not going to really matter for 20-somethings, I imagine, because there’s a sense of invincibility in that age group.”

In that sense, he doesn’t agree with people who say the pandemic is over and we should just get on with life. Quite the opposite.

“They’re just wrong,” he says. “It’s a nuanced conversation we need to continue to keep having. And the truth of it is that I’ve got shit on the line. I don’t want my audiences to come and sit in masks as a general rule. If you’d asked me three years ago, ‘Do you want your audiences with mufflers on their face?’ Like, literally my entire job is hearing them laugh. And now I’m saying, ‘Please come to my show and put something over your face’, right? Because I care about the audience, and I care about other people.” 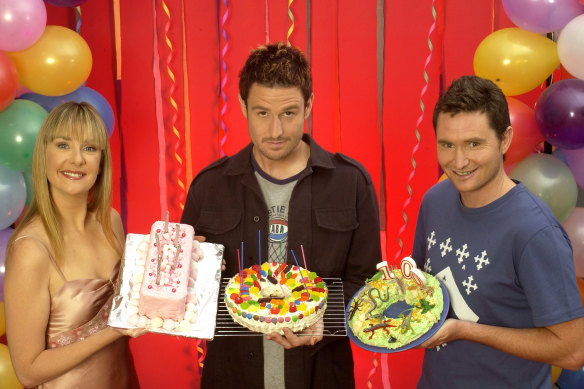 Anderson, centre, celebrates 100 episodes of The Glass House with Corinne Grant and Dave Hughes in 2004.Credit:ABC

I’m Not Fine, Thanks is the closest you’ll get of Anderson revealing much of himself. He’s been in the public eye for more than 20 years, becoming well-known first as co-host of Triple J’s breakfast show and then as host of the ABC panel show The Glass House. He’s been on TV and radio ever since, as well as creating a podcast empire (he’s usually got four or so on the go), plus the stand-up gigs. But what you won’t do is catch him on a red carpet, hosting the Logies or revealing much of his personal life on social media.

Anderson is the only person named in the book, there is the occasional reference to a “we”, but otherwise it’s just unnamed friends, eccentrics in the local community and mothers worrying their children’s memories have been wiped by a temperature test (it is the north coast, after all).

“So I wanted to take a bunch of things that I did feel comfortable writing about, and infuse those feelings and emotions into the story.”

On that level, the book reveals him to be a man who cries, which is kind of surprising, particularly as his tear-jerker of choice is the kids’ ice hockey film The Mighty Ducks.

“I’m just a bit of a sucker for any underdog story,” he says. “That’s the truth. I think the major theme of my life is unearned power or unearned authority. I’ve seen power up close, seen how it all works, and sometimes I’ve been invited into those corridors to see what it looks like. And I don’t like it. I don’t like how it works.

“I mean, part of it is probably because I’m a kid from a dairy farm of 250 people in country Victoria who’s found himself in the middle of all this. And that in itself, I guess, is some sort of underdog story.” 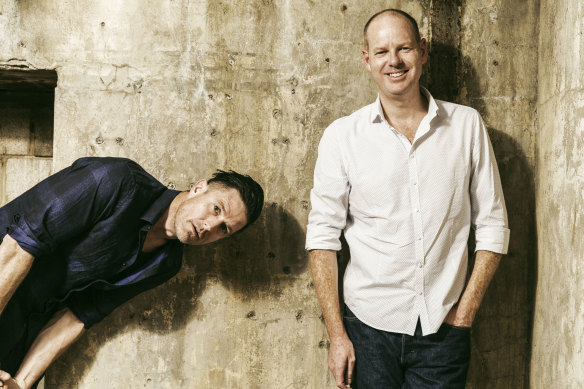 And while Anderson does say the book isn’t a cry for help, you do wonder if he’s going to turn into a hermit. Could he end up locked away in a darkened room like the infamous US billionaire Howard Hughes, eating chocolate bars for months?

“I absolutely will turn into Howard Hughes, 100 per cent,” he says, laughing. “If you’d asked my friends 15 years ago, if I was gonna do that, they would have also told you that [I would turn into Howard Huges]. In a broad sense, being alone is not something that I am uncomfortable with.

“And Barry Humphries, and I know it’s a bit on the nose these days to quote Barry, but one of my favourite quotes about stand-up is when someone asked him, ‘What’s it like to walk out on stage in front of 3000 people? What’s going through your mind?’ And he says, ‘Ah, alone at last.’

“I do think that’s true. There’s something about stand-up that is a solo occupation. I was just reading Sean Micallef’s book and he was talking about the fact he always likes working with other people. And I enjoy that, but I always like stand-up. Alone at last.

“I’m like a Nirvana song – or a Pixies song, if you want to go back to who Nirvana ripped off – there’s a lot of quiet so the loud bits pop. I hope that my connections with people, and through my work, in particular, are an intense moment when they are there. But to be able to do that, there’s a lot of quiet time just inside my own head, pottering about.

“Am I going to turn into Howard Hughes? Absolutely. But did COVID change that? That’s probably the one thing COVID didn’t change.”

I Am Not Fine, Thanks is released on November 1.