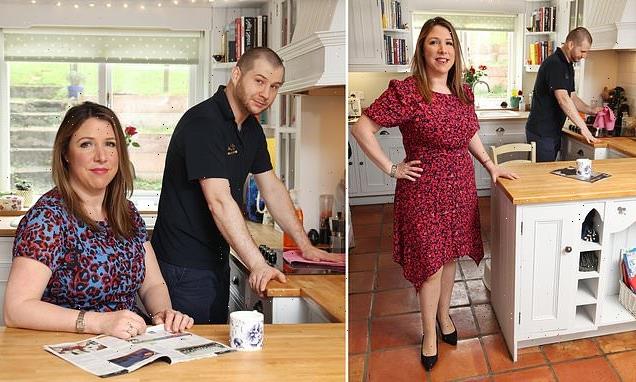 Why every woman should hire a MALE cleaner: He doesn’t make small talk, never judges your messy cupboards– and won’t flirt with your husband

There are certain chores which, in my house, generally call for a man. And, no, I’m not talking about DIY or chopping logs. I’m talking about the really tough work: the cleaning.

My new cleaner, Martin, is 32 and from the Czech Republic. Not only has he brought order to my life, he has turned my somewhat old-fashioned views on gender roles on their head — and all I have to do is pay him £15 per hour for the privilege.

He changes loo rolls and does the bins. He carries the vacuum cleaner upstairs without a word of complaint. He makes my usually helpful husband, Dom, look lazy by comparison and sets my two young sons a good example. He’s practically perfect.

He’s also my unlikely, but highly prized, solution to the cleaner wars raging in my part of the Cotswolds. A good cleaner is worth her weight in Diptyque candles in these parts — and the best ones know it. One school mum recently poached another mother’s cleaner by sealing the deal with an offer of unlimited use of their holiday pad in Salcombe. The women are no longer on speaking terms and I’ve heard it’s made PTA meetings very awkward. 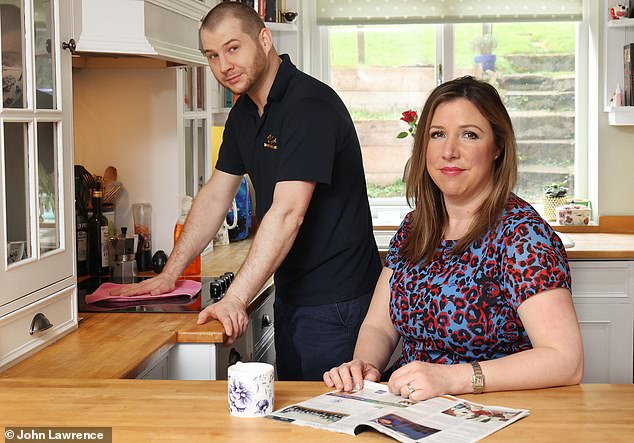 Georgina Fuller, who lives in the Cotswolds, explains the benefits of having a male cleaner after hiring Martin, 32, (both pictured) from the Czech Republic

It’s got even worse since the pandemic — most of us working mums still have PTSD from months of homeschooling, cooking and cleaning. When the restrictions were relaxed to allow cleaners to visit, we welcomed ours back with open arms. So I was bereft when our lovely former cleaner, Georgetta, went back to her native Romania. After a desperate plea on Facebook, a local cleaning agency sent a charming Polish girl called Paulina. But my heart sank when I heard just a few weeks later that I’d been outbid — she had found another job.

I was initially a little sceptical when the agency announced they would be sending someone called Martin instead.

Based on previous boyfriends, my two young sons (who expect pocket money for making their beds) and a husband who, after 11 years in our house, barely knows where we keep the vacuum cleaner, I didn’t know if he would be up for the job.

I needn’t have worried. Martin arrived with a car boot full of cleaning equipment. Within a few hours, the house was spotless, the floors mopped, cushions plumped and, best of all, there was a fresh loo roll in our bathroom.

With three young children, a dog, two cats and my husband and me both mostly working from home, keeping the house clean is no mean feat. But Martin used to work in construction, so he’s not afraid of a little heavy lifting. In fact, he insists he actually likes his job. ‘I’ve been cleaning for three and a half years. I love the flexible hours,’ he says.

‘My mum always used to tell me off for being lazy and not helping around the house but now when I go home I always spot the cobwebs and get the duster out.’ It’s every mother’s dream. And as for me, I’m delighted. Having a male cleaner beats a female one in surprising ways. Before Martin, I felt like I had to make friends with our cleaners and would spend hours talking to them. 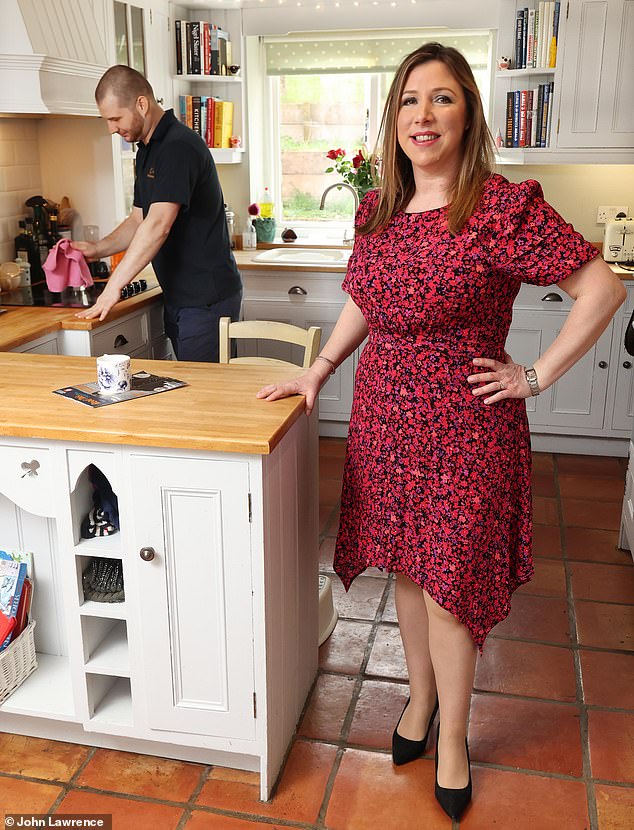 Georgina said she doesn’t have to make Martin (both pictured) a cup of tea and they don’t make small talk, he just blitzes the house like a whirlwind

One of the best things about Martin is the lack of needless small talk. I don’t have to make him a cup of tea and ask after his kids (he doesn’t have any, I don’t think), or how his weekend was.

He just blitzes the house like a whirlwind. My husband isn’t interested in chatting to him either, which is just a tiny bit of a relief. Having a 19-year-old supermodel Austrian au pair a few summers ago made me feel ever so slightly threatened. I kept wondering if it was too much of a distraction.

With Dom working from home now, I wouldn’t be very comfortable having a young Helena Christensen around the house. He hardly even notices Martin.

And Martin is also delightfully uncomplaining. We had a lady who was probably in her late 50s cleaning for us a few years ago who stated from the start that she wouldn’t clean windows and couldn’t dust the top of the wardrobes because she had a bad back. I obviously didn’t want to make it worse but I wished she had mentioned it before we took her on.

I confess, I’m not a fan of domestic drudgery. It took me years to realise I was supposed to clean the inside of our oven. It wasn’t until my mother-in-law turned up brandishing a bottle of Oven Pride that I got the hint. Sometimes, when I see the state of my seven-year-old’s bedroom ‘floordrobe’, I just have to close her door.

But there’s nothing like the vortex of activity I become when I know a woman — a woman who makes her living tidying up other people’s mess — is about to descend on my home. I’ve spent hours picking up Lego and tidying before the cleaner arrived. 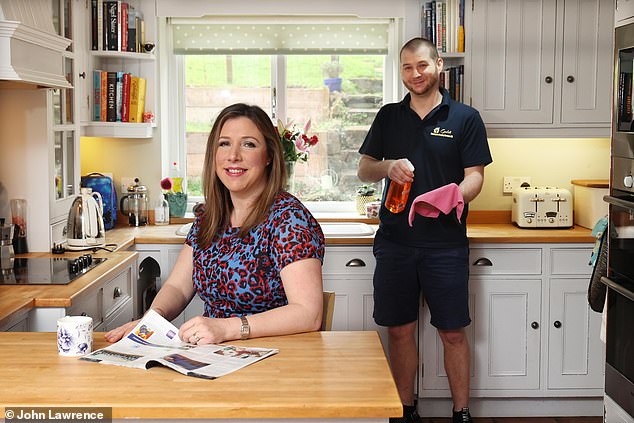 Yet with Martin, I don’t worry so much. I don’t feel that he’s judging me. Martin usually wears headphones to work and looks as though he’s in another, more musical world, which is fine by me.

I can’t imagine him spreading tales through the village, no matter what he found in our kitchen cupboards. One of our cleaners lived locally and I dreaded her gossiping to our neighbours about the fact my boys never put the loo seat down or our hideous 1980s-style Dynasty en-suite bathroom, which we finally got rid of.

And here’s the final — slightly guilty — secret to why I love having a male cleaner. There’s no getting away from the fact I somehow feel more comfortable employing a man. It feels like levelling out the gender playing field. Our last cleaner was a single mum and I felt it was unsisterly and disloyal to my feminist principles, making her scrub my floors when I could do it myself.

Yes, I know it could be argued that I’ve got that the wrong way around — that it might have been better to keep another woman in employment. But having Martin polish the worktops just seems to keep that nagging voice in my head a little quieter.

I think it’s great for my two boys, who are 13 and (almost) ten to see me hiring a man to clean. It helps break down gender stereotypes and if it means my sons can look after themselves, so much the better. I think it’s helped spur my husband on too. He’s even started hanging the washing out.

Martin admits he ‘fell into’ cleaning after meeting his girlfriend, Agnieszka, who runs the agency he works for, Goldi Cleaning Services in Oxfordshire.

‘I hadn’t thought about it as a job before but once Agnieszka showed me how to do it, I started to enjoy it,’ he says. He is tight-lipped when I ask if he’s ever had any bad experiences — or what he thinks about my family — but he does mention once shrinking a very expensive, designer jumper which belonged to a famous writer who lives nearby.

Perhaps it’s just as well I have never asked him to hang out my underwear. Which reminds me, I need to put my (rather large, granny-style) knickers away before Martin arrives. There are some things, after all, that you just don’t want a man to see.